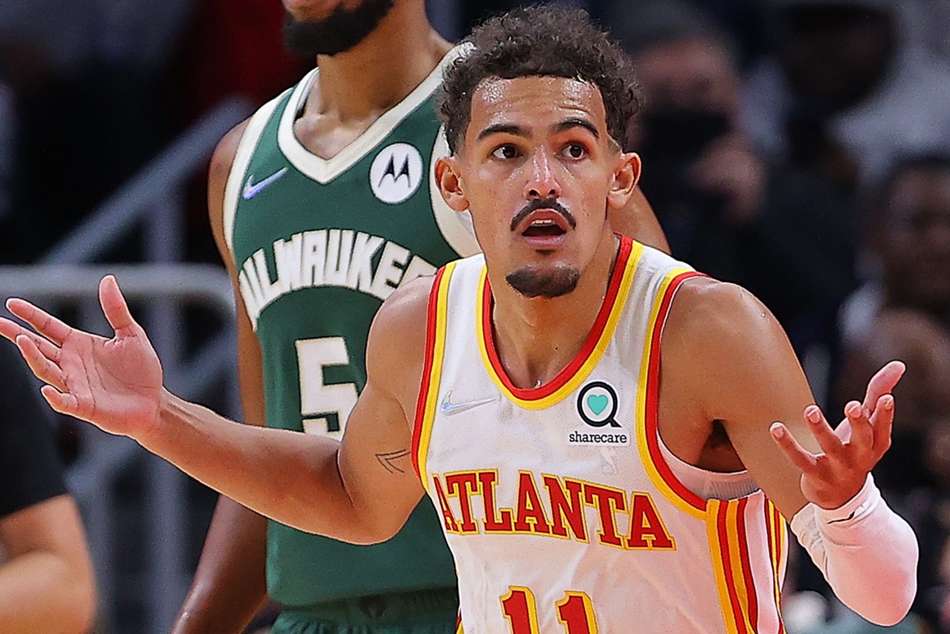 Like so many possessions in the NBA, the action begins with a team-mate – in this case, John Collins or Clint Capela – screening the on-ball defender, the man guarding Young.

Young is a good three-point shooter, so his defender must go over the screen. Young has seen this kind of defence countless times before and immediately dashes towards the hoop on the opposite side of the screener of his defender.

This leaves Young’s man mostly behind him, sprinting to get back into a better guarding position. Feeling his advantage, Young stops suddenly – or even pounces backward a bit – creating contact with his defender and launching a shot while flailing his limbs to exaggerate the contact.

Only, this season, NBA officials aren’t blowing the whistle.

The league placed an emphasis this offseason on reducing “overt, abrupt or abnormal non-basketball moves” that are employed specifically used to draw fouls, commonly known as foul-baiting.

While drawing fouls has always been a skill in basketball, the NBA felt that certain players were warping their movements in unnatural ways to get to the free-throw line and making the game less enjoyable to watch for most fans.

Young, fairly or not, has become the poster child for foul-baiting and has struggled to adjust early in the 2021-22 season. In an October 30 press conference, Young said he thinks the rule changes have gone too far.

“I don’t want to get fined too much, but this is frustrating,” Young said after a loss.

“When guys are driving straight and getting knocked off balance, it’s still a foul. There are a lot of things that they took out that were necessary – veering back and jumping into guys – that’s different. There’s certain things I agree with in the rule changes and there are things that are still fouls.

“Guys are going to get hurt, especially a little guy like me who is going up against bigger and stronger defenders.”

This season, Young is getting to the line 3.1 fewer times per game, on average, compared to last season. The fourth-year guard has kept his scoring average steady, though, by shooting career highs from the field and from three-point range.

Other stars have fared not quite as well.

Among qualified players, Damian Lillard of the Portland Trail Blazer has seen his opportunities at the line drop the most in the NBA, a reduction of 3.8 attempts per game. Lillard has struggled in general this season, with his scoring average down more than eight points and with career-low shooting efficiency.

The Washington Wizards’ Bradley Beal has lost 3.7 free throw attempts from last season, the second most in the league, and has also seen his scoring drop eight points per game.

Only five of the league’s 30 teams have increased the number of free throw attempts per game over last season, led by the Chicago Bulls, who appear to be thriving under current rules with a new roster.

The Bulls are shooting an average of 2.5 more free throws per game than last season, thanks largely to the red-hot start of DeMar DeRozan, whose 7.9 free throw attempts per game are his highest since 2016-17 (8.7).

The Bulls as a whole rank eighth in the league in scoring defence this season, allowing 103.3 points per game after giving up 111.6 per game last season.

Teams are scoring 5.3 fewer points per game compared to 2020-21, and some of the league’s more defensive-minded players are finally feeling like they have a fair chance.

“Can I say how satisfying it is to watch the game without all those terrible calls? Guys cheating the game and grabbing guys and getting the foul,” said the six-time All-Defensive Team honoree and 2016-17 Defensive Player of the Year.

“I’ve been really enjoying watching basketball this year. I kind of had stopped watching the NBA a bit because it was just too flailing and flopping and guys cheating the game and getting free throws. So I think that’s been great.”

Former center and current ESPN analyst Kendrick Perkins, who built a 14-season NBA career as a defensive enforcer, has been among the media personalities who are most supportive of a more physical league.

“I love the rule change. I think it’s great for basketball. Now the older generation doesn’t have a reason to call us soft – the league is getting back to that point,” Perkins said on ESPN’s NBA Today.

“I’m a huge fan of Trae Young, but some of the calls are just not fouls, and he’s just going to have to fight through.”

Some players may already be adjusting to a different style of basketball, including infamous flailer James Harden of the Brooklyn Nets. Through his first 12 games of the season, Harden was averaging just 18.2 points and attempting 4.7 free throws per game.

Over his last four games, however, Harden is scoring a more typical 26.5 points per game and getting to the line an average of 10.8 times.

As the league starts to adjust, some in NBA circles are sceptical that scoring numbers will remain suppressed.

Memphis Grizzlies head coach Taylor Jenkins has commented that the league’s dip in scoring could be attributed to players “trying to find rhythm and chemistry” and added that over the course of 82 games, the scoring totals “will definitely change league-wide.”

While players may adjust, the NBA appears adamant about keeping the emphasis in place as-is. In fact, teams are averaging even fewer free throw attempts in November than they did in October.

One unintended consequence of the change could be less willingness to drive into traffic, leading to more three-point attempts. While teams are launching an all-time high 35.7 attempts from deep per game, that trend has long been established, with the league breaking the record for three-point attempts per game in 10 straight seasons.

Whether it’s with deep shooting or another tactic, offences are sure to counter with new ways to find good shots.

“The league is an efficient market and is going to make adjustments,” said Oklahoma City Thunder head coach Mark Daigneault. “As offences boom, you figure out new ways to defend. It’s a constant ping-pong game between both ends of the floor.”

Denial of responsibility! NewsUpdate is an automatic aggregator around the global media. All the content are available free on Internet. We have just arranged it in one platform for educational purpose only. In each content, the hyperlink to the primary source is specified. All trademarks belong to their rightful owners, all materials to their authors. If you are the owner of the content and do not want us to publish your materials on our website, please contact us by email – [email protected]. The content will be deleted within 24 hours.
best sports newsearlyfoulsfreeNBAnews update sportsnewsupdateOfficiating

Paine steps down as Australia test captain after ‘sexting’ scandal