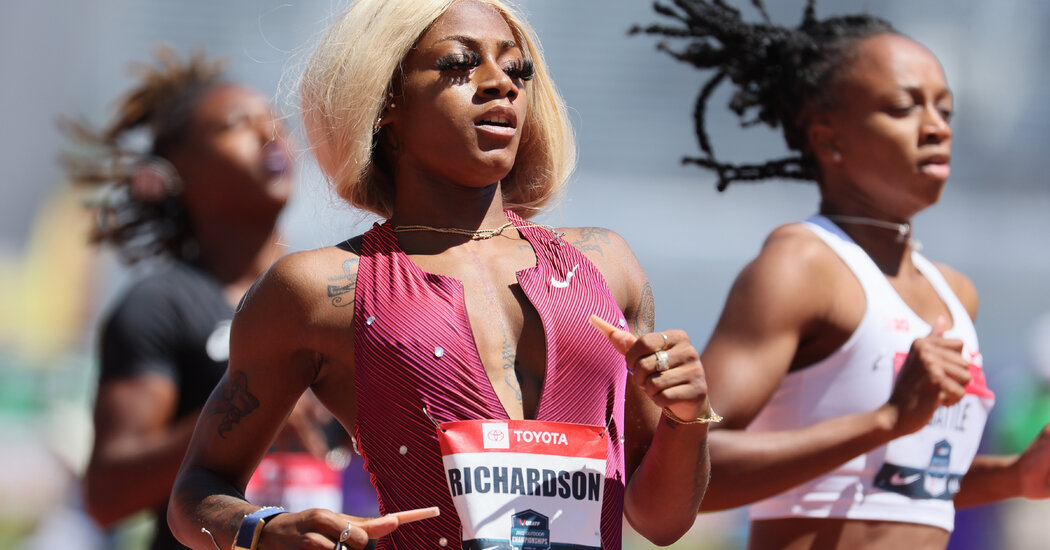 Four Races From the U.S. Track and Field Championships Worth Watching Again

Stars falling short, a broken world record, and a brewing rivalry highlighted the four-day U.S. outdoor track and field championships in Eugene, Ore., over the weekend.

The event acted as qualifying meet for the world championships, which will be in the U.S. for the first time in July, and also in Eugene. Athletes who had not already punched a ticket to the championships raced to finish in the top three of their event to represent the country.

The meet wrapped up Sunday evening with Daniel Roberts winning the 110-meter hurdle championship; Trey Cunningham of Florida State University and Devon Allen, the Philadelphia Eagles receiver who is continuing his two-sport exploits from his days at the University of Oregon, finished just behind him. They will join Grant Holloway, who won a silver medal at the Tokyo Olympics and automatically qualified as the defending world champion.

Here’s a look at each of some of the biggest story lines:

The race was over before it even really began. Sydney McLaughlin, running in lane five, quickly made up the stagger on the other hurdlers and began racing against the clock. She crossed the finish line in a new world record of 51.40 seconds, best her previous world record, 51.46, set in 2021 at the Tokyo Olympics.

To put that time into perspective: McLaughlin’s race, over hurdles, would have qualified her for the 400 final. McLaughlin will likely double her load at the world championships with the 4×400-meter relay; she helped the U.S. win gold in the event at the Tokyo Games.

Dalilah Muhammad, a former world record-holder in the 400 hurdles and McLaughlin’s fiercest competitor, did not compete. Muhammad has not beaten McLaughlin since her world title victory in 2019, when she ran a then-record time of 52.16 seconds.

Sha’Carri Richardson did not qualify for the world championship team.

Sha’Carri Richardson will not represent the U.S. at the world championships after failing to make both the 100 and 200 finals. Richardson went into the trials with the fourth-fastest 100 time in the U.S., but she looked far from her best this weekend, running 11.31 seconds in the 100 to finish 23rd out of the 31 athletes who finished the event. In the 200, Richardson made it to the semifinals but was eliminated after finishing fifth in her heat with a time of 22.47.

Richardson’s personal best in the 100 is 10.72 seconds, still the sixth-fastest time run by a woman.

The rivalry between Noah Lyles and Erriyon Knighton heats up.

As Erriyon Knighton, 18, sprinted around the first curve of the 200 dash — blazing past the 2019 world champion Noah Lyles — it looked like the race was over. But as Knighton — who ran the fourth-fastest 200 ever in April — headed down the final straightaway, Lyles began to climb back into the race. Lyles sped past Knighton just before the finish line, stuck his tongue out, and smiled while pointing at Knighton. Lyles finished in 19.67 seconds, just ahead of Knighton’s 19.69.

“Erriyon got the best of me on the turn,” Lyles said while standing next to Knighton in a post-race interview. “I saw him reach his top speed, and I said, ‘mine is faster.’”

Lyles and Knighton have the two fastest 200 times among active runners heading into the world championships.

Allyson Felix misses out on an individual spot at the world championships.

“I’m happy that I don’t have any more open 400s ever,” Felix told reporters with a smile following the race. Felix, the most decorated U.S. track athlete in history, announced that 2022 would be her final season. She said she came into the meet with the focus of making a relay team at the world championships, so qualifying for an individual event wasn’t disappointing. “The 400 is hard for me,” Felix said. “It’s not a natural passion, so it’s always been something I challenge myself with.”

Denial of responsibility! NewsUpdate is an automatic aggregator around the global media. All the content are available free on Internet. We have just arranged it in one platform for educational purpose only. In each content, the hyperlink to the primary source is specified. All trademarks belong to their rightful owners, all materials to their authors. If you are the owner of the content and do not want us to publish your materials on our website, please contact us by email – [email protected]. The content will be deleted within 24 hours.
best sports newsChampionshipsfieldnews update sportsnewsupdateracessports newssports update

How to download movies, and series on Netflix, Amazon Prime Video and Disney+ Hotstar – Smartprix