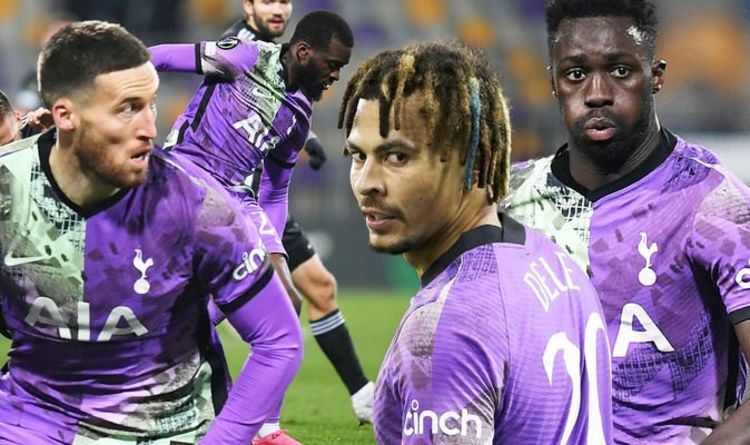 Tottenham fell to one of the most embarrassing defeats in the club’s history as they were beaten 2-1 by lowly Slovenian side NS Mura in the Europa Conference League on Thursday. Tomi Horvat gave the hosts a shock lead in the first-half, and although Harry Kane equalised with around 20 minutes to play, Amadej Marosa struck with the last kick of the game to earn his team a stunning win.

Spurs boss Antonio Conte was unsurprisingly left fuming at full-time, and the ruthless Italian admitted: “At this moment the level at Tottenham is not so high. I am happy to stay here but at the same time I must be honest and tell you we need to work a lot to improve the quality of the squad.”

With that being said, Express Sport takes a look at four players who may find that the Mura game was their last for Spurs…

Out-of-sorts midfielder Alli was handed his first start in the Conte era on Thursday, but lasted just 54 minutes before being substituted, contributing a yellow card and very little else in yet another bitterly disappointing showing.

The 25-year-old has been handed chances under a whole host of managers to turn his form around, but has failed to do so, and it is sadly looking like he will never be able to get back to his best at Spurs.

A fresh start may be the most sensible option for all parties, and it is appearing unlikely that Conte will trust the former England international again anytime soon.

Some Spurs supporters have argued that wing-back Doherty has been one of their worst signings of the modern era, with the Irishman failing to impress since his move from Wolves in August 2020.

With Conte favouring a 3-5-2 system there were some hopes that he would be more comfortable featuring in his preferred position, but Doherty had another torrid time against Mura, giving away possession on a number of occasions and providing very little offensively.

He is surely not good enough for the level Conte is aspiring to get the team to, and could well be shipped out sooner rather than later.

There were high hopes for young Colombian centre-back Sanchez when he joined Spurs in a £40m move from Ajax back in 2017.

Yet despite showing occasional moments of brilliance he has struggled to find consistency, and makes far too many errors to be considered a safe pair of hands for Conte.

Sanchez’s gaffe against Mura summed it up, where he was turned all too easily for the winning goal and looked more like Bambi on ice than a top-level defender.

He will surely be deemed not good enough by his new manager.

Ndombele is now working under his fifth manager at Spurs, and it seems as though not one of them have been left fully convinced by the mercurial Frenchman.

His talent is undeniable, but there have been question-marks over his fitness and work-rate, and for a manager as regimented and demanding as Conte, this poses a big problem.

Ndombele was again largely anonymous against Mura, and worryingly still didn’t seem to be putting in 100% effort.

If he doesn’t buck his ideas up in training, he may never be given another chance by Conte.

Denial of responsibility! NewsUpdate is an automatic aggregator around the global media. All the content are available free on Internet. We have just arranged it in one platform for educational purpose only. In each content, the hyperlink to the primary source is specified. All trademarks belong to their rightful owners, all materials to their authors. If you are the owner of the content and do not want us to publish your materials on our website, please contact us by email – [email protected]. The content will be deleted within 24 hours.
Antoniobest sports newsBlastclubConteGamenews update sportsnewsupdate