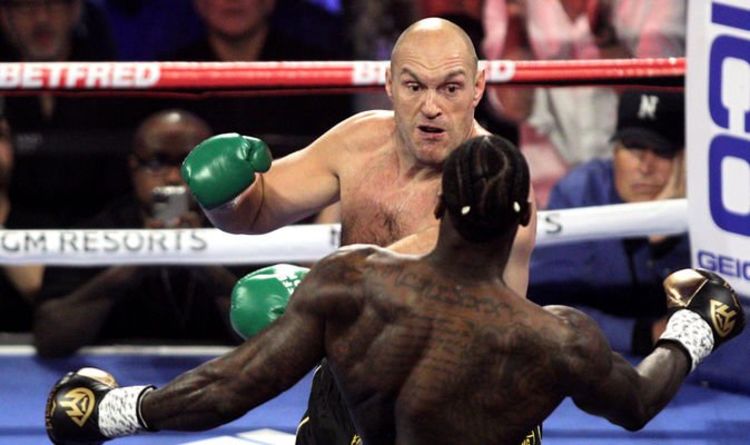 Tyson Fury takes on Deontay Wilder in their trilogy fight tonight as the American looks to win back his WBC belt. The first fight between the men in December 2018 ended in a draw before Fury won the second contest in February 2020 courtesy of a knockout.

There were huge doubts over whether the fight would ever go ahead, with Fury appearing focused on setting up a bout with Anthony Joshua instead.

The all-British head-to-head was the fight everyone wanted to see and Joshua’s promoter Eddie Hearn had said it was a ‘done deal.’

However, that bout was scrapped after Wilder invoked a clause in his contract to ensure his trilogy fight with Fury went ahead.

Fury and Wilder were supposed to meet this summer but the encounter was postponed after Fury tested positive for COVID-19.

Wilder was adamant that Fury was merely using the excuse to ensure the duo’s fight was canned and made his thoughts perfectly clear last month.

JUST IN: Usyk urged to snub Joshua rematch and fight Fury instead

The undercard will get going at midnight BST, with the ring walks for the main event expected between 4am and 5am on Sunday morning.

The duo will be fighting for the WBC and the Ring heavyweight titles.

It’s set to be a scintillating affair in America and Fury is favourite with the bookmakers to win the fight.

“This man is a real piece of work – a real bully excuse maker,” Fury said ahead of tonight’s clash.

“Not a warrior or a man at all – beat the mug two times.

“I’ve battered him and his trainer. I’m going to go all guns blazing, full out attack, all infantry, straight out the door from round one until I finish this.”

Meanwhile, Fury’s father John has also given his views on the fight.

“Tyson will send him into retirement this time,” Fury Snr said.

“He’ll never box after this. He’s going to get beat to pieces, smashed to pieces.”

Denial of responsibility! NewsUpdate is an automatic aggregator around the global media. All the content are available free on Internet. We have just arranged it in one platform for educational purpose only. In each content, the hyperlink to the primary source is specified. All trademarks belong to their rightful owners, all materials to their authors. If you are the owner of the content and do not want us to publish your materials on our website, please contact us by email – [email protected]. The content will be deleted within 24 hours.
best sports newsDeontayFightFurynews update sportsnewsupdatesports newssports update

Deontay Wilder and Tyson Fury: A Trilogy Defined by Its Twists