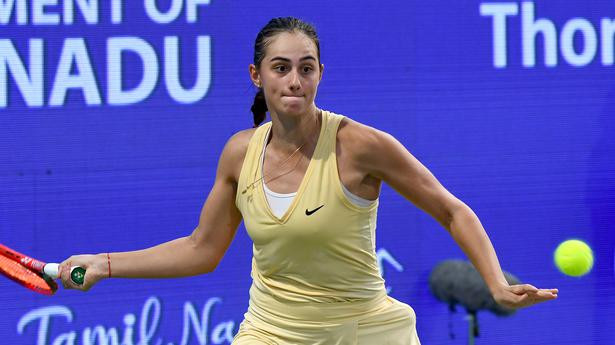 Gasanova shock for Riske­-Amritraj; Maria too strong for Ankita

The top-­seeded American’s serve fails to click as the World No. 147 registers her third win over a top-­25 player; the German drops just one game against the Indian

The top-­seeded American’s serve fails to click as the World No. 147 registers her third win over a top-­25 player; the German drops just one game against the Indian

Top seed Alison Riske-Amritraj’s stay at the WTA Chennai Open was short-lived as she was ousted in the opening round by World No. 147 Anastasia Gasanova 6-2, 6-3 at the SDAT Tennis Stadium here on Tuesday.

For someone who came into the tournament in decent form, having reached the fourth round at the US Open, it was a dispiriting loss.

Gasanova, no stranger to victories over top players, having beaten the likes of Elina Svitolina and Karolina Pliskova in the past, didn’t need to play her best match. Her American opponent turned in a disastrous service performance, holding just twice all evening, winning only 48% of her first-serve points and 27% on the second.

“After the US Open I wanted to take a break,” said Gasanova, after what was her third win over a top-25 player. “I had waited so long for the tournament but I had a terrible loss [qualifying first round].

“But I thought ‘let me come to India and try’. I have the experience of beating top players. I reminded myself that I could do it. Had she played her best, she could have won. So, I had to be perfect.”

The start was anything but that. Both players were skittish and tight as they traded breaks in the fourth and fifth games. But Gasanova soon gained the upper hand, breaking in games six and eight to pocket the first set.

Riske-Amritraj, the World No.23 who prefers fast surfaces, appeared to struggle with the medium slow nature of the acrylic, overcooking her shots trying to play through the court. The safety option was to go cross-court just to keep the ball in play, which she did on occasions. But it wasn’t a winning tactic.

Gasanova relaxed early in the second set, conceding her very first serve. The next few games played out the same way the first set had – multiple breaks of serve before the 23-year-old Gasanova took control.

Towards the end, Riske-Amritraj’s forehand – more of a steer and less of a shot – broke down completely and it was no surprise when she sent one long on match-point.

As the evening wore on, the paying public were in for more disappointment as Ankita Raina fell 0-6, 1-6 to fourth seed Tatjana Maria. The German, cheered on by her two cherubic daughters from courtside, sliced her way through practically every shot, even on the forehand side.

That left Ankita to do the heavy-lifting – picking up low balls, generating the pace and finding the right angle – all of which proved beyond her.

“I am really happy,” Maria said, after the win “I just wanted to make her play as many balls as possible. My slice is basically my game and it worked really well.”

Denial of responsibility! NewsUpdate is an automatic aggregator around the global media. All the content are available free on Internet. We have just arranged it in one platform for educational purpose only. In each content, the hyperlink to the primary source is specified. All trademarks belong to their rightful owners, all materials to their authors. If you are the owner of the content and do not want us to publish your materials on our website, please contact us by email – [email protected]. The content will be deleted within 24 hours.
Ankitabest sports newsGasanovaMarianews update sportsnewsupdateRiskeAmritrajshock