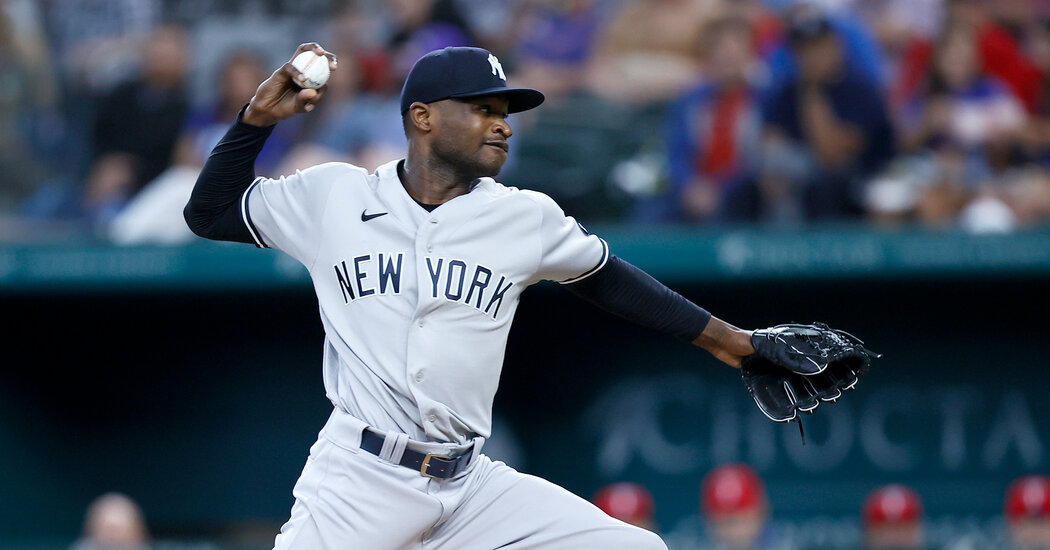 German Leads Yankees to a Second Straight Shutout of Rangers

ARLINGTON, Texas — Domingo German wasn’t in the stadium for Corey Kluber’s no-hitter the night before, yet still shared the anxious moments watching on TV.

No such no-no drama for the Yankees right-hander — just another strong pitching performance for the team in another shutout of the Texas Rangers.

The Yankees won their sixth straight series and at 25-19 moved to a season-high six games over .500. Yankees pitchers have thrown seven shutouts in the team’s first 44 games for the first time since 1967.

“They can pitch, man,” Manager Aaron Boone said of his rotation. “Obviously the bullpen’s been there to complement them and been terrific all year, as well. I love where the starters are at right now and the way they’re throwing the ball as a group.”

Texas had at least one hit in each of the first five innings, starting with Nick Solak’s one-out single in the first, a day after Kluber pitched the major leagues’ sixth no-hitter this season.

But Texas didn’t get a runner past second base against German (4-2), who finished with two perfect innings and allowed six hits with five strikeouts as Yankees pitchers finished the four-game series with 22 consecutive scoreless innings.

“You understand what’s going on so when you’re watching the game, you’re nervous,” German said of watching Kluber on TV. “You want it to happen. Sure, everybody wants to have a no-hitter or a perfect game. I think I have the ability to do so.”

Kluber and German gave Yankees their first back-to-back starts of at least seven shutout innings since Luis Severino and Masahiro Tanaka at Boston on April 26-27, 2017.

German threw a career-high 26 changeups, holding the Rangers to 2 for 10 on that pitch, and improved to 4-0 in his last six starts.

“Kind of tough following up a no-hitter,” Judge said. “Domingo was right there. All his pitches were working. That changeup is nasty. Just all around a great showing by him.”

Chad Green pitched a perfect eighth, and Aroldis Chapman struck out two in the ninth for his 11th save in 11 chances as the Yankees matched the score from Kluber’s gem. Chapman struck out pinch-hitter Khris Davis on a 101.6 mph pitch for the final out.

DeGrom Is Sharp in Rehab Outing

Mets ace Jacob deGrom struck out eight and walked none in three hitless innings during an injury rehabilitation outing for the St. Lucie Mets at the Palm Beach Cardinals on Thursday night in the Low-A Southeast League.

DeGrom threw 30 of 41 pitches for strikes in his first game action since May 9. He struck out his last six batters.

Masyn Winn was the only batter to reach, leading off the first with a grounder that second baseman Jimmy Titus misplayed for an error.

DeGrom was pulled from his May 9 outing against Arizona after five innings because of right side tightness.

The 32-year-old right-hander is a two-time N.L. Cy Young Award winner and is 3-2 with a 0.68 ERA in six starts for the Mets this season with 65 strikeouts and seven walks in 40 innings.

Denial of responsibility! NewsUpdate is an automatic aggregator around the global media. All the content are available free on Internet. We have just arranged it in one platform for educational purpose only. In each content, the hyperlink to the primary source is specified. All trademarks belong to their rightful owners, all materials to their authors. If you are the owner of the content and do not want us to publish your materials on our website, please contact us by email – [email protected]. The content will be deleted within 24 hours.
best sports newsGermanleadsnews update sportsnewsupdateRangersShutoutsports news

Android 12, Google Workspace and 5 other big reveals from Google I/O