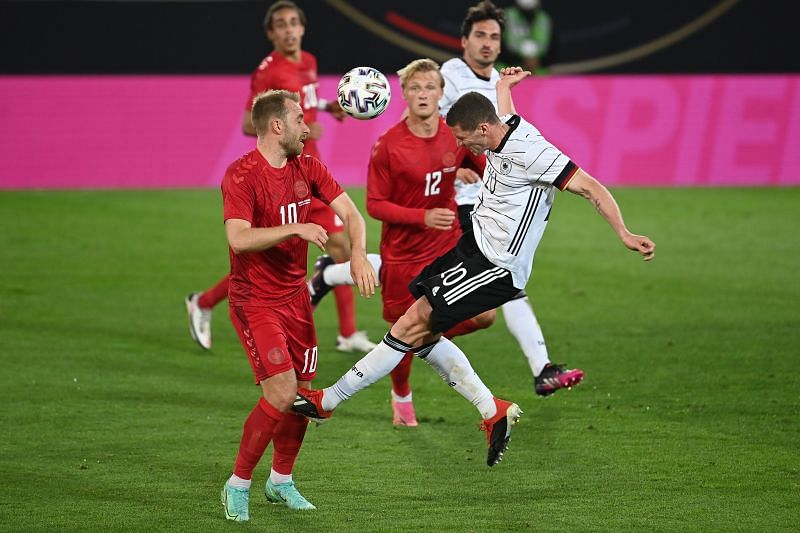 Fresh off a 1-1 draw with Denmark, Germany will welcome Latvia to the Merkur Spiel Arena Stadium on Monday.

Latvia, meanwhile, claimed a 3-1 win over Lithuania and will aim to build on that performance.

In the first of their two international friendly games, Germany were held to a 1-1 draw by Denmark at the Tivoli Neu Stadium.

Joachim Low’s men took the lead three minutes after the break through Florian Neuhaus, but the visitors drew level thanks to a 71st-minute strike from Yussuf Poulsen.

Prior to that, Germany had picked up six points from three games in the 2022 World Cup qualifiers back in March.

They currently occupy third position in Group J, three points behind first-place Armenia and level on points with North Macedonia.

Latvia, on the other hand, are second-bottom in Group G after suffering two losses and one draw in their three World Cup qualifiers in March

However, Dainis Kazakevičs’s men returned to winning ways on Friday, when they cruised to a 3-1 win over Lithuania.

Latvia will now look to claim consecutive victories which could serve as a huge confidence boost ahead of their Baltic Cup final with Estonia next Thursday.

This will be the fourth meeting between the two nations. Germany are unbeaten against Latvia, picking up two wins and one draw. Their last encounter came back in 2004, when both sides played out an uneventful goalless draw.

Germany have called up a 26-man squad for their forthcoming Euro 2020 tournament, including Chelsea’s Kai Havertz, Timo Werner and Antonio Rudiger.

The Champions League winning trio were rested in the game against Denmark last time out and might be handed their return to the fold.

Meanwhile, Dainis Kazakevičs has called up a 27-man squad for their two friendly ties and the Baltic Cup. There are also no injury or suspension concerns in the Latvia camp.

Germany have failed to win in their last two outings and will look to end this run ahead of the forthcoming Euro 2020 competition.

Given the gulf in quality and experience between the two nations, we predict Germany will claim the win unscathed.

Loading...
Denial of responsibility! NewsUpdate is an automatic aggregator around the global media. All the content are available free on Internet. We have just arranged it in one platform for educational purpose only. In each content, the hyperlink to the primary source is specified. All trademarks belong to their rightful owners, all materials to their authors. If you are the owner of the content and do not want us to publish your materials on our website, please contact us by email – [email protected]. The content will be deleted within 24 hours.
Loading...
best sports newsFootballFriendliesGermanyGermany FootballinternationalInternational Friendlies 2020-21latvia