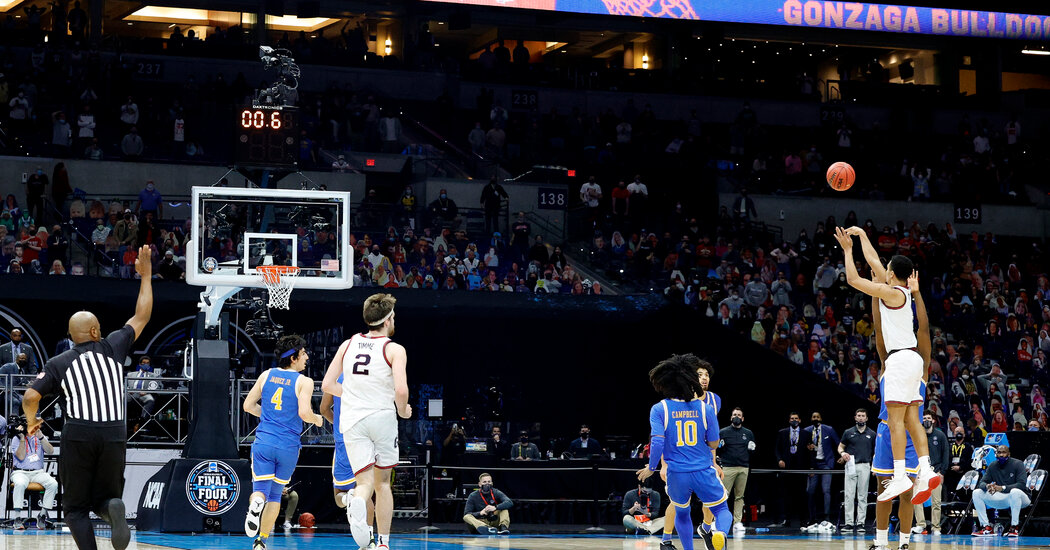 INDIANAPOLIS — When Jalen Suggs’s prayer masquerading as a 40-foot heave kissed off the glass and went through the net as the buzzer sounded late Saturday night, all he could think to do was mimic his basketball heroes, Kobe Bryant and Dwyane Wade.

So Suggs sprinted across the court, leapt atop one of the tables near the sideline and thrust his arms in the air triumphantly. The shot, the dagger at the end of overtime that finally vanquished U.C.L.A., instantly jogged the memory banks for context: Kris Jenkins, Gordon Hayward (who was deprived of a forgiving bounce), Christian Laettner and Ulysses S. Reed (look that one up, kids) — all cherry-on-top shots of epic N.C.A.A. men’s tournament games.

Still, this is the season played during a pandemic, with its accompanying disruptions and restrictions, and it was all but impossible not to see it through that prism.

That’s especially so if you were inside Lucas Oil Stadium, the cavernous football stadium that in normal times would be packed with more than 75,000 fans.

Instead, one of the concessions to hold the tournament, which is worth close to $850 million in television rights for the N.C.A.A. and is being played in its entirety in Indiana, was that there would be attendance restrictions. And so the stadium was divided in half with a giant curtain — Miley Cyrus played on the other side between the semifinal games — and when the final buzzer sounded, there were 8,131 fans — about as many as there were cardboard cutouts — who bore witness.

“Obviously the stadium would have erupted,” Gonzaga guard Joel Ayayi said on Sunday, acknowledging that by now he and his teammates are used to the muted atmosphere. “It would have been really loud. I think it would have brought that moment even more on the crazier side. The reality is it wasn’t.”

There was a visceral thrill in the moment, for sure, but the distance the fans were kept from the court served as a sort of aural moat, muffling rather than amplifying the experience. Other usual accouterments — bands and cheerleaders — were also absent.

It was a reminder that no matter how much manufactured noise is piped into a television broadcast, proximity matters. The crowd are the dabs from a painter’s palette that brings sports moments to life.

If Kawhi Leonard’s Game 7 shot for the Toronto Raptors in 2019 that bounced one, two, three, four times on the rim — while a packed arena (and all of Canada) held its breath, frozen in place — had dropped in at the N.B.A. bubble, would it have carried the same resonance?

How about Tiger Woods draining a chip late Sunday afternoon in the dimming light at the Masters? Or the Yankees putting men on base for a late October rally in the Bronx? The day after the Chicago Cubs won their first World Series in 108 years with a Game 7 victory in Cleveland, a taxi driver told me it was hard to follow along on the radio: the crowd was so evenly split, there was a roar at every big moment — though nothing quite like when Rajai Davis belted a dramatic home run.

Diminished for this tournament, though, is not just the tableau, but the voices that animate the moments.

The last time the Final Four was held in Indianapolis, the N.C.A.A. issued more than 2,000 news media credentials. This year, there are a fraction of that with room for only about 20 reporters who are stationed behind the basket where Suggs started his sprint upcourt. There are others along a radio row at the concourse level, and more in an auxiliary press box in the upper reaches of the stadium.

Locker rooms are closed, of course, and videoconference interview sessions after games are restricted to the coach and one player from each team. A poignant scene from the last Final Four — Auburn’s Samir Doughty sitting at his locker, answering each and every question with a veteran’s composure about the last-second foul he committed that helped send Virginia through to the title game — would not be seen this year.

Late Saturday night, the elation in Suggs and the exhaustion in Johnny Juzang, who had carried U.C.L.A. to the cusp of a monumental upset, seeped through the screen. But missing were perspectives that would normally be gleaned from each locker room. The view of Corey Kispert, who inbounded the ball and was trailing the play, or of Drew Timme as he stood under the basket tracking the flight of the ball. Or the reaction from U.C.L.A.’s David Singleton as he planted himself — arms ramrod straight in the air — in Suggs’s path.

Those, however, are just the trade-offs that have come to define this tournament.

In normal times, the 16 teams that survive the tournament’s first weekend return to campus and bask in the attention from their fans for a few days before flying on to the next site. For the fortunate teams that reach the Final Four, the drill is repeated.

This year, there are no such distractions, pleasant or not. Players are alone with one another — seeing even their parents only with rows of empty arena seats or hotel lobby windows between them.

When Suggs climbed down from the tabletop and Gonzaga finished celebrating, the Zags walked back up the tunnel to their locker room. The 34 members of their traveling party returned to their hotel, convened for a late-night meal and tried their best to turn their attention away from one heavyweight fight and toward the next — Monday night’s title game against Baylor.

A game between the best two teams in college basketball, neither of whom has won a title, promises to provide lasting memories. This year, though, they will just have to be at a distance.

Denial of responsibility! NewsUpdate is an automatic aggregator around the global media. All the content are available free on Internet. We have just arranged it in one platform for educational purpose only. In each content, the hyperlink to the primary source is specified. All trademarks belong to their rightful owners, all materials to their authors. If you are the owner of the content and do not want us to publish your materials on our website, please contact us by email – [email protected]. The content will be deleted within 24 hours.
best sports newsBuzzerBeaterGonzagasHooplamissingnews update sportsnewsupdatereminder