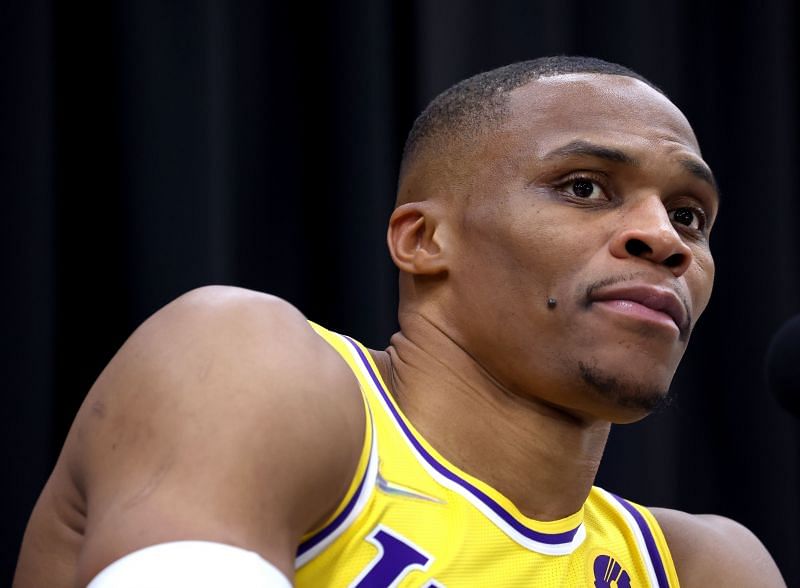 The LA Lakers have had a rough start to their 2021-22 NBA preseason campaign. They have so far failed to win a single game in their first four appearances. Their latest star acquisition, Russell Westbrook, has found it difficult to get going as well. The former MVP has recorded 15 turnovers in two games so far.

Westbrook had nine of them against the Phoenix Suns on Monday. He had mixed reactions when asked about it in the post-match press conference. Here’s what the 32-year-old said:

“The turnover stuff is on me, but good thing they don’t count. Turnover it over 15 times. Ain’t nothing nobody can do about it. It’s all good. It’s on me, though…Easy fix, though. Very easy. Just because timing. Just timing. Guys getting used to my speed, my pace, my timing. … Me just getting my timing back on passing. … That is definitely on me. Nothing with the offense…Those are all personal errors, timing, and somebody can figure out.”

“It’s definitely on me. Easy fix though. Just timing.” Russell Westbrook on the turnovers in the last two preseason games.

“It’s definitely on me. Easy fix though. Just timing.” Russell Westbrook on the turnovers in the last two preseason games. https://t.co/ERpJE1aR3U

Russell Westbrook has led the league in turnovers five times in his career. The most recent instance was last season when he played for the Washington Wizards. He turned the ball over 312 times in that stretch.

That stat is something several fans and analysts were worried about when the LA Lakers made a blockbuster trade for him this summer. Nevertheless, Russell Westbrook has a lot of time to adjust to Frank Vogel’s setup. Limiting turnovers is something a player of his caliber can improve upon as time goes by.

The LA Lakers are yet to deploy their full-strength lineup. They are probably the only team left to do that in the preseason. Lakers fans can finally get to see the trio of LeBron James, Russell Westbrook and Anthony Davis play together in Purple and Gold.

Anthony Davis mentioned that in the post-game press conference after the loss to the Phoenix Suns.

Anthony Davis said that he, LeBron James and Russell Westbrook will make their debut together against the Warriors on Tuesday.

Anthony Davis said that he, LeBron James and Russell Westbrook will make their debut together against the Warriors on Tuesday.

The LA Lakers will be taking on the Golden State Warriors in their next preseason game. Akin to the Phoenix Suns, they too have a fixed lineup they have already deployed in the preseason already. It will be interesting to see if a full-strength new-look Lakers squad can manage to win their first game together.

Denial of responsibility! NewsUpdate is an automatic aggregator around the global media. All the content are available free on Internet. We have just arranged it in one platform for educational purpose only. In each content, the hyperlink to the primary source is specified. All trademarks belong to their rightful owners, all materials to their authors. If you are the owner of the content and do not want us to publish your materials on our website, please contact us by email – [email protected]. The content will be deleted within 24 hours.
Basketballbest sports newscommentscommittingcountdontgamesGood

I commit a crime every time I pick a team, says Gareth Southgate | Football News – Times of India