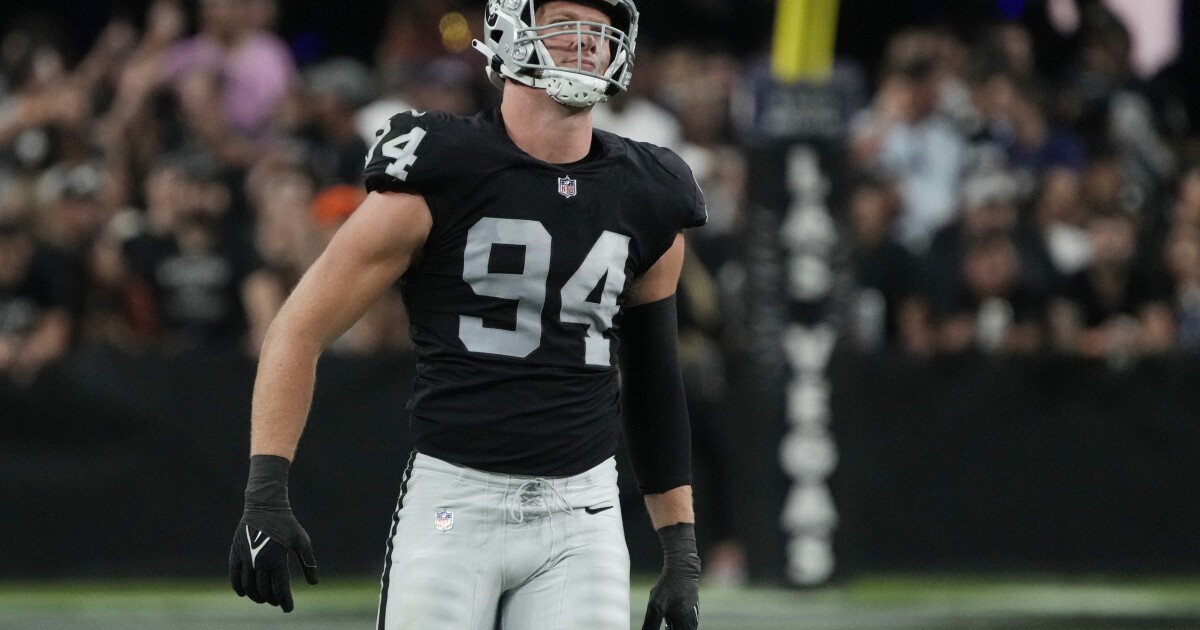 Raider Nation was its usual eclectic self for the season opener in Las Vegas on Monday, with some fans going with a Captain Jack Sparrow-meets-Darth Vader vibe that nicely complemented the team’s new $1.9-billion “Death Star” stadium.

One fan in particular caught my eye because while he was dressed like middle management, the Chucky doll he was carrying — a tribute to coach Jon Gruden — was decked out head to toe in Raiders gear. Assuming it had toes.

Anyway, I guess because there was so much color from all around to soak in, it felt strange not seeing a rainbow, given the moment.

The lack of hoopla during the preseason was a pretty good hint that the first game for the Raiders’ Carl Nassib, the NFL’s first openly gay player, wasn’t going to be treated as a momentous occasion. Certainly nowhere near the kind of fanfare the NBA’s Jason Collins received in 2013 when he became the first openly gay active player in any of the big four sports leagues.

Still, while no one expected a parade, the death of this NFL bogeyman warranted a bigger funeral. But I didn’t see anything in the stadium adorned with pride-related paraphernalia to mark the presence of Nassib, who posted a video on Instagram in June sharing that he was gay.

Now, he may have wanted it that way, and good on him. He deserves the reception he wants. I just don’t want people to start acting like it wasn’t as recently as 2018 that at least one team was still asking prospects questions about their sexual orientation during interviews at the combine, presumably to avoid drafting gay players.

Threats to employment were just one of the reasons men like Dave Kopay and Wade Davis waited until retirement to come out. Fear of being targeted on the field kept Esera Tuaolo quiet until he called it quits. California Supreme Court Justice Martin Jenkins, who briefly played for the Seattle Seahawks in the 1970s, didn’t come out until last year, telling the Advocate: “I compartmentalized in college, when I went to the NFL, through law school, through all of it.”

The NFL is more than 100 years old. That’s a century of compartmentalizing. Of fearing you might lose your job for being gay or bisexual. Of knowing there isn’t any legal recourse for you if you did.

One week in June, Nassib comes out. The next week, the NFL declares “football is gay,” and suddenly what was once thought of as impossible was made fairly pedestrian. Like the tone that was set over the course of 100 years was but a glitch and not the chosen route that influenced the direction of the sport on every level. Slurs used as motivation by high school coaches. Visitors locker rooms painted pink in college. One school, the University of Hawaii, once changed its football team’s name from Rainbow Warriors because the rainbow “really put a stigma on our program at times in regards to it’s part of the gay community.”

When Nassib appeared on the big screen during warmups on Monday, there were no audible boos or slurs, thankfully. In one Raiders hype video, Nassib was featured fairly early, which felt like the organization’s way of acknowledging the history without the emphasis Michael Sam received when he became the first openly gay man to be drafted in 2014.

Seeing it downplayed, a part of me felt gaslighted. If a person didn’t know better, they could imagine that Nassib was the first openly gay man good enough to play in the league, when in fact the league had had a culture that purposefully kept out gay men like Nassib.

Acknowledging Nassib wouldn’t have been solely about him being first; it also would acknowledge all the men who made it possible for him by coming out in retirement and chipping away at the barriers. Nassib himself touched on this after the game: “Had a lot of people come before me in the LGBTQ community that helped me get to where I am,” he said. “I’m super thankful for that.”

My hope is that seeing Nassib sack and strip the ball away from Baltimore Ravens quarterback Lamar Jackson in overtime, setting up the game-winning touchdown, was acknowledgement enough for some of those people Nassib referred to. People who played in fear because for the first 100 years the NFL wasn’t gay. In fact, it was quite the opposite. May the next 100 years continue to make up for that discrimination, perhaps even a formal apology to the Dave Kopays of the world.

In any case, at least Kopay and company now have the memory of Carl Nassib being the hero in his first game as an openly gay player. And maybe the cheers for him can be embraced as cheers for all of them as well.

“I’m really happy that we got the win on the day that kind of made a little bit of history, which was really nice to do,” Nassib said.

But we know Monday night wasn’t just a little bit of history. It can’t be. Not if it took more than 100 years to achieve.

Denial of responsibility! NewsUpdate is an automatic aggregator around the global media. All the content are available free on Internet. We have just arranged it in one platform for educational purpose only. In each content, the hyperlink to the primary source is specified. All trademarks belong to their rightful owners, all materials to their authors. If you are the owner of the content and do not want us to publish your materials on our website, please contact us by email – [email protected]. The content will be deleted within 24 hours.
Loading...
best sports newsbigCarldealdebutgayGrandersonNassibs

Why teen Ansu Fati has Barcelona dreaming again after…