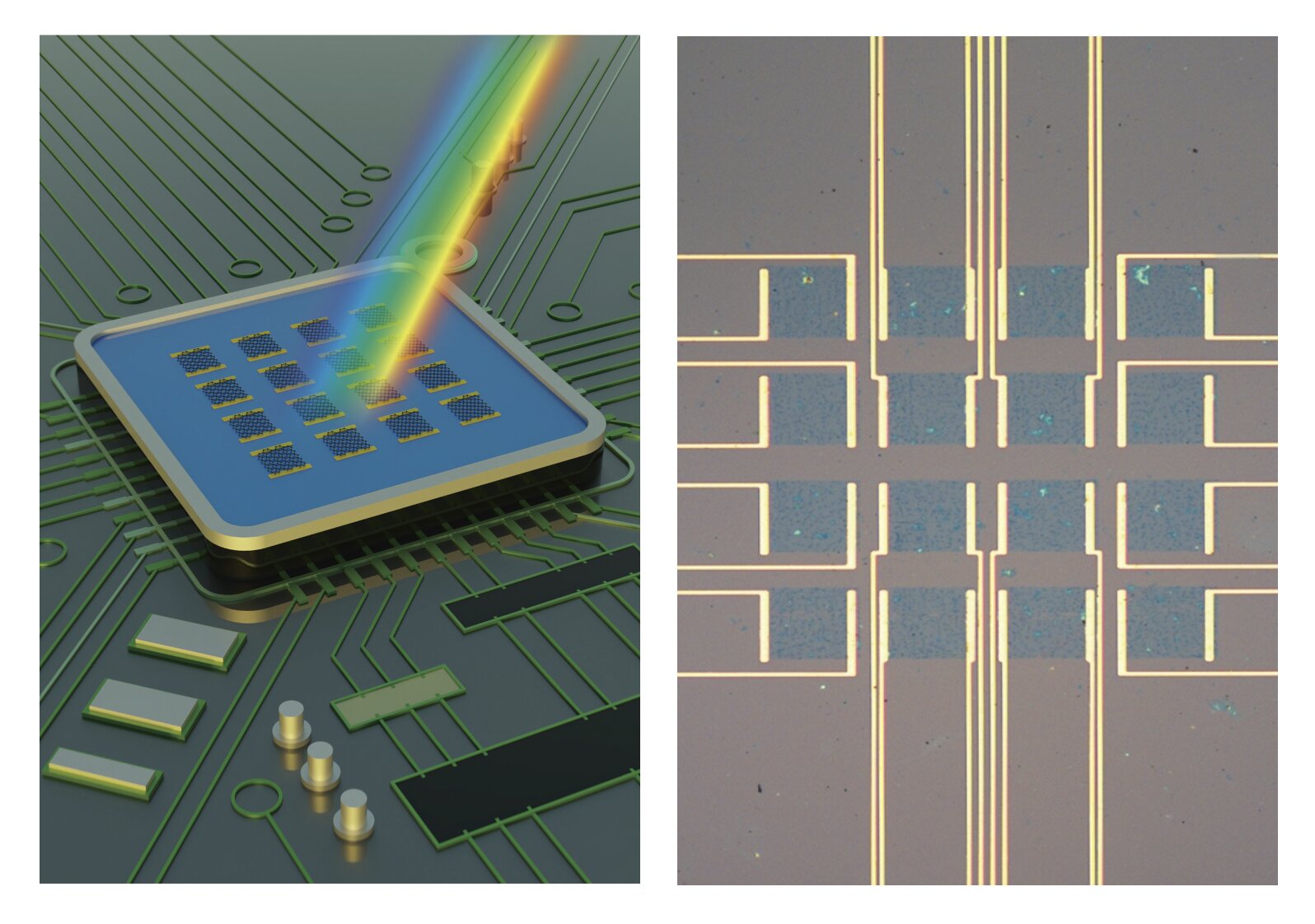 Photodetectors, sensors that can detect light or other forms of electromagnetic radiation, are essential components of imaging tools, communication systems, and various other technologies on the market. These sensors work by converting photons (i.e., light particles) into electrical current.

Researchers at Zhejiang University have recently developed a new photodetector that could detect light within a broader bandwidth. Their device, presented in a paper published in Nature Electronics, could be used to develop new and more advanced imaging technologies.

Typically, CCD and CMOS imagers based on silicon (Si) can only detect light in the visible range, due to their intrinsic bandgap absorption limit. Xu and his colleagues were able to broaden the bandwidth of the light that can be picked up by their photodetector by incorporating graphene into it.

“Our goal was to improve the responsivity and spectral performance of Si-based image sensors,” Xu explained. “First, we formed a Schottky junction between the Si and the multilayer graphene (MLG), where the IR-light induced hot holes in MLG are injected into Si (n-type) under the electrical field of Vg via photo-thermionic (PTI) emission. Second, we formed a deep-depletion well in the SiO2/Si interface under the voltage pulse, storing and integrating photo-charges.”

Ultimately, the researchers placed single-layer graphene (SLG) on top of the oxide in their device. This layer ultimately allows the photodetector to directly and non-destructively read out the carriers stored in the deep depletion well through the photogate effect, which is caused by the graphene’s strong field.

“The design of our proposed device realizes in-situ pixel-level readout of the charges in the profound depletion potential well, avoiding the sequential charge transfer in traditional CCD devices,” Xu said. “In addition, we broadened the detection bandwidth to IR by integrating a MLG charge injection path at the bottom of the device.”

In initial tests, Xu and his colleagues found that their photodetector’s detection bandwidth is significantly broader than that of traditional Si-based devices, which typically only detect light in the visible wavelength. As it integrates a readout channel SLG, a Si-based deep depletion well and a charge injection layer (MLG), the device could be particularly valuable for imaging applications with high-density integration.

In the future, the photodetector developed by this team of researchers could be used to develop imaging devices for broadband image fusion, computer vision, robots, and various other applications. In their paper, Xu and his colleagues also briefly outline a series of suggestions for designing circuits that could enable the integration of their devices with new or existing technology.

“In our next studies, we will focus more in depth on the integration of our devices,” Xu added. “Our devices can perform the pixel information storage function via the storage of light-induced carriers in the potential well. This, combined with the tunable responsivity, could potentially prove valuable for building neuromorphic devices.”

Denial of responsibility! NewsUpdate is an automatic aggregator around the global media. All the content are available free on Internet. We have just arranged it in one platform for educational purpose only. In each content, the hyperlink to the primary source is specified. All trademarks belong to their rightful owners, all materials to their authors. If you are the owner of the content and do not want us to publish your materials on our website, please contact us by email – [email protected]. The content will be deleted within 24 hours.
bandwidthbest technology newsbroaderchargeinjectiondetectiongraphenenews update technewsupdate