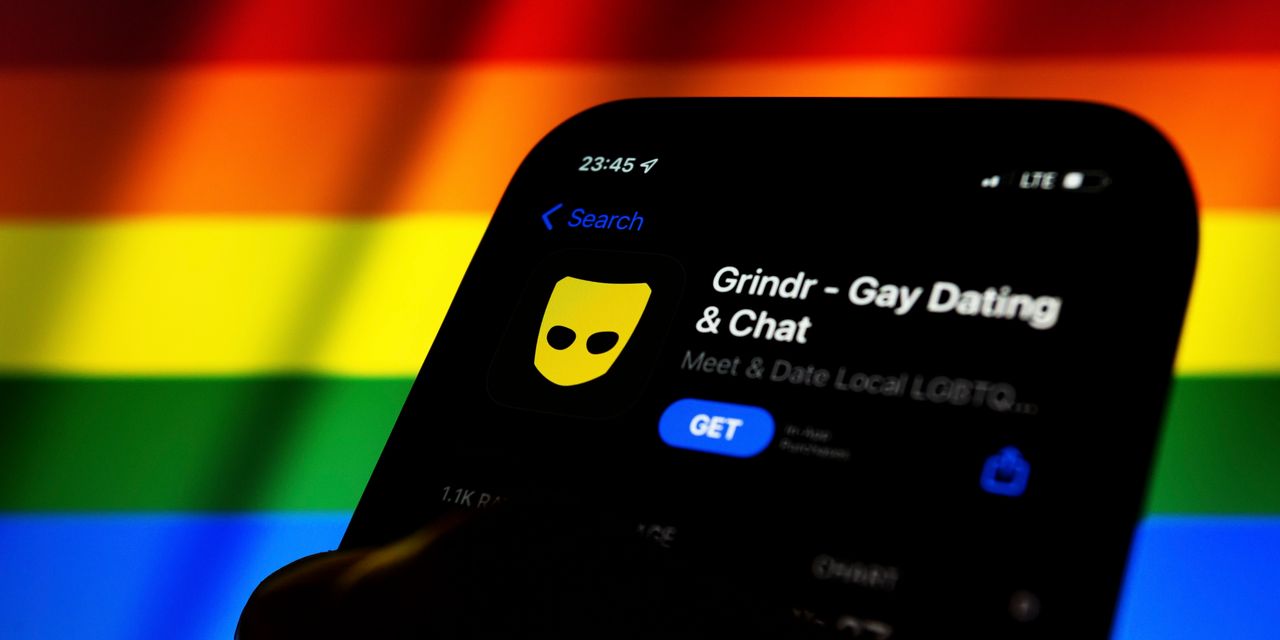 Grindr LLC plans to further monetize its services, review subscription prices and beef up its finance team once the dating-app operator joins the public markets via a merger with a special-purpose acquisition company on Friday.

The transaction, valued at $2.1 billion, is expected to provide Grindr with roughly $384 million in proceeds, which will bolster its balance sheet and help with paying down debt. The company will list on the New York Stock Exchange under a new name, Grindr Inc.

Grindr, which announced its planned SPAC-merger in May, is entering the public markets at a turbulent time as share prices of major rivals have taken a beating.

is down more than 28%, according to data provider S&P Global Market Intelligence. The tech-heavy Nasdaq Composite has fallen 28.5%.

Being a listed company will allow Grindr to draw on additional resources for its expansion, Chief Financial Officer Vanna Krantz said. “What this allows us to do is get ready for anything that we might see on the horizon, in terms of long-term bets, in terms of possible [mergers and acquisitions], just having this other currency that we didn’t have prior,” Ms. Krantz said.

SPAC transactions have fallen significantly in recent months following a surge in 2020 and 2021. Such deals have raised $13.2 billion in funds since the beginning of the year through Nov. 15, down from over $148 billion during the same period last year and more than $65 billion in 2020, according to Dealogic, a data provider. The number of transactions has fallen to 83 this year, compared with 542 during the same period in 2021 and 178 the year before, Dealogic said.

“Obviously it would be more advantageous if the markets were in a better place, but the truth is, we don’t really need the capital, because we are able to fund a vast majority of our growth internally,” said Ms. Krantz, who stepped in as finance chief in late September.

Joining the public markets via a SPAC adds a level of comfort, Ms. Krantz added. With a traditional IPO, the price depends on market conditions at the time of listing. With a SPAC, the pricing is less dependent on demand from investors, which can be beneficial in a volatile market.

The Morning Ledger provides daily news and insights on corporate finance from the CFO Journal team.

Grindr, which appointed George Arison as chief executive last month, has fewer paying users than other dating-app operators, including Match and Bumble. For the third quarter, Match reported an average of 16.5 million paying monthly users across its apps including Tinder, Match, Hinge and OkCupid, while Bumble had 3.3 million paying monthly users at the end of September. Meanwhile, Grindr had over 765,000 paying users as of June 30, up more than 34% from the prior year.

Ms. Krantz said she plans to review subscription prices, which currently start at $19.99 a month for paid accounts. “We just need to think and test, do some price testing,” she said. Around 80% of Grindr’s revenue comes from subscriptions, while a smaller portion is generated with ad revenue.

The finance chief also wants to further monetize Grindr’s business, including through its Albums feature, which was released globally this year and is currently free. It allows users to share private photo albums with select users. Grindr had nearly 11 million monthly active users at the end of last year, according to the latest figure the company agreed to share, with paying user penetration—a metric that divides average paying users by average monthly active users—at around 6%. By comparison, Tinder’s paid penetration was at around 18%, while for the Bumble app, the rate was 9%, according to a regulatory filing related to Grindr going public. Match Group declined to comment. Bumble didn’t immediately respond to a request for comment.

Once the company is public, Ms. Krantz will be responsible for further building out Grindr’s finance function. That will mean hiring staff across the finance team, including for roles such as tax, treasury and audit, to help with the financial reporting obligations a public company has. Ms. Krantz said she would focus on further improvement when it comes to forecasting.

“In the near term, it is clear that there are macro headwinds and nobody’s immune to that,” said Shweta Khajuria, an internet analyst at Evercore ISI, the research arm of financial services firm

referring to dating app providers. But the companies’ subscription-based models make them more resilient in the face of a potential downturn, particularly as prices across the dating apps aren’t prohibitive for a lot of people, ranging from about $12 to $30 a month, according to Ms. Khajuria, who covers both Match and Bumble.

During the quarter ended June 30, Grindr’s revenue grew roughly 34% from a year earlier, to $46.6 million, according to a filing. The company reported a net income loss of $4.3 million during the second quarter compared with a $1.8 million profit during the prior-year period. The year-over-year loss was largely driven by one-time costs associated with going public, such as legal, consulting and audit fees, Ms. Krantz said. Third-quarter results haven’t been released yet.

Denial of responsibility! NewsUpdate is an automatic aggregator around the global media. All the content are available free on Internet. We have just arranged it in one platform for educational purpose only. In each content, the hyperlink to the primary source is specified. All trademarks belong to their rightful owners, all materials to their authors. If you are the owner of the content and do not want us to publish your materials on our website, please contact us by email – [email protected]. The content will be deleted within 24 hours.
acquisitionsAcquisitions/MergersAcquisitions/Mergers/Shareholdingsbest technology newsBusinessBusiness/Consumer ServicesC&E Industry News FilterCFO

Overwatch 2 Will Tweak Its Rewards System; Blizzard to Soon Remove the Game Along With WoW, Diablo 3, and More From China