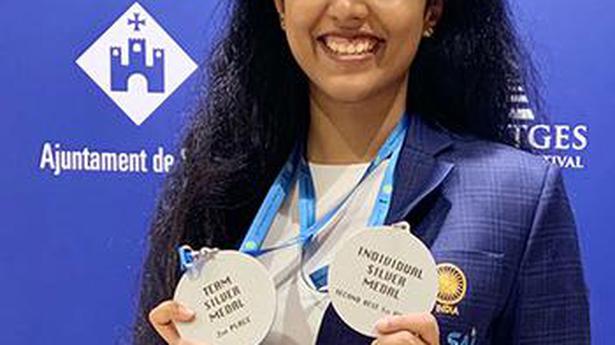 It was a memorable double for 30-year-old Dronavalli Harika — being a member of the Indian women’s team which won the silver at the recent FIDE World women’s team chess championship at Sitges (Spain) and also bagging an individual silver on the top board by remaining unbeaten.

Harika said it was one of the most satisfying performances in her career, especially as it came after a long break in the international circuit.

“I am happy and satisfied. Winning a team medal in the Women’s Olympiad or World team’s has been one of my long-standing dreams,” Harika told The Hindu.

“I first played in an Olympiad in 2004 and since then it has been a roller coaster ride.

“On numerous occasions, we were close but somehow never achieved a podium finish,” she said.

“I have been longing for this moment and I am extremely proud that we won the first ever silver for Team India and I hope this historic occasion is the start of many to come. I would rank this amongst my best results ever.

“From an individual perspective, I am happy to come out undefeated and win the silver on Board 1,” she said.

“In every round someone or the other stood up and scored crucial point. Off the board, we shared a very good atmosphere which was largely helpful in achieving this historic result.

“ I hope this will inspire many more to dream big in the world of chess,” said Harika, who is now preparing for the online Super League to be held from October 11 to 17 and the FIDE Grand Swiss from Oct. 24.

Denial of responsibility! NewsUpdate is an automatic aggregator around the global media. All the content are available free on Internet. We have just arranged it in one platform for educational purpose only. In each content, the hyperlink to the primary source is specified. All trademarks belong to their rightful owners, all materials to their authors. If you are the owner of the content and do not want us to publish your materials on our website, please contact us by email – [email protected]. The content will be deleted within 24 hours.
best sports newshappyHarikanews update sportsnewsupdatesatisfiedsports newssports update

Virgin Media users can upgrade to new router with faster…