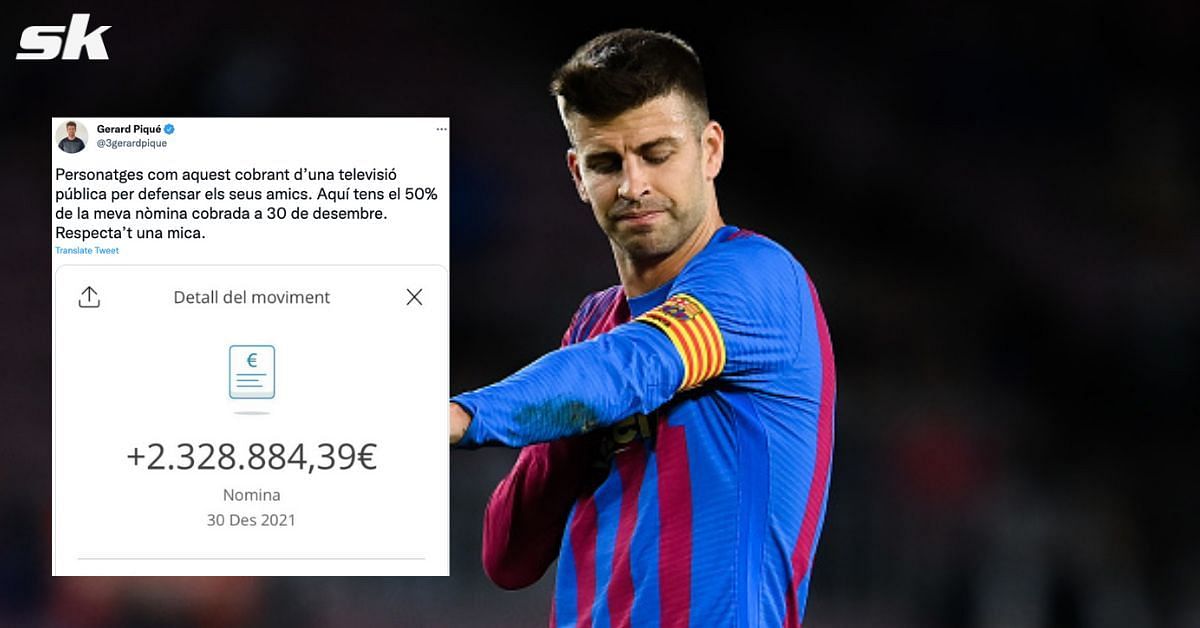 Barcelona star Gerard Pique has hit back at claims that he earns an exorbitant salary by posting a snapshot of his bank account statement on Twitter. A report by Lluis Canut on Onze TV3 named Pique, Jordi Alba and Sergio Busquets as earning exorbitant salaries at the Catalan club.

However, Gerard Pique hit back on Twitter and even posted a screenshot. In a strongly worded tweet, the Barcelona defender said:

“People like [Canut] charging public television to go on and defend their friends. Here is 50 percent of my [base] pay, as paid on Dec. 30. Have a little respect for yourself.”

Gerard Pique astonishingly posted a screenshot of his payment received from FC Barcelona to prove he indeed took a major pay cut to play for the club this season. 🤯

Gerard Pique astonishingly posted a screenshot of his payment received from FC Barcelona to prove he indeed took a major pay cut to play for the club this season. 😳🤯#Pique #Barcelona #FCBarcelona https://t.co/n1GafOkKsF

In relation to the manifestations of Mr. Lluís Canut carried out yesterday in the program ‘Onze’ of TV3, FC Barcelona wants to clarify the following:

1. The information on the salaries of certain first team players has not, in any case, been provided by the club and its origin is unknown.

2. In any case, the amounts referred to in the information are erroneous and do not conform to reality. Furthermore, in the case of the first three players referred to [Pique, Busquets and Alba], it gives fixed amounts which, as the sums involved are based on variables, will possibly never be reached.

3. It is false that the aforementioned players have only deferred their salary. Messrs. Piqué, Busquets and Alba gave up part of their salary when they signed the last contract renewal last summer.

We consider it inappropriate, unprofessional, and that [Canut] has acted in bad faith by offering this information as truthful. We regret that data of this type is provided because it infringes the personal rights of the players and deserves, when the information is true, confidentiality.”

The official statement confirms that senior players like Gerard Pique, Jordi Alba and Sergio Busquets have cut their salaries to help Barcelona financially.

On the pitch, Barcelona are showing some signs of promise under Xavi. The Catalan giants will be hoping to have a good January and break into La Liga’s top 4 with some consistent performances.

Denial of responsibility! NewsUpdate is an automatic aggregator around the global media. All the content are available free on Internet. We have just arranged it in one platform for educational purpose only. In each content, the hyperlink to the primary source is specified. All trademarks belong to their rightful owners, all materials to their authors. If you are the owner of the content and do not want us to publish your materials on our website, please contact us by email – [email protected]. The content will be deleted within 24 hours.
bankbarcelonabest sports newsclarifyFootballGerardGerard PiqueLa Liga 2021-22