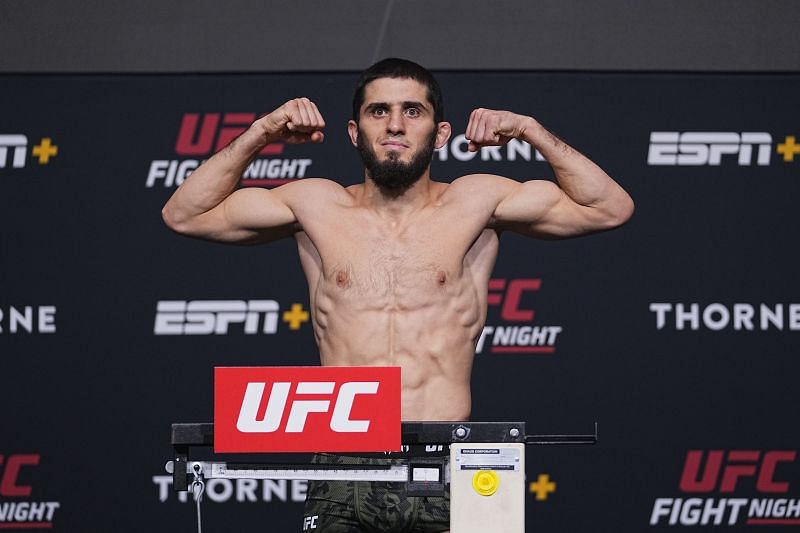 Islam Makhachev has revealed how much Khabib Nurmagomedov helped and supported his team ahead of UFC Vegas 31.

Last night, Islam Makhachev proved to the world why he’s considered to be the next big thing in the lightweight division. He picked up a dominant submission victory over Thiago Moises. It served as further evidence of his rise to prominence, with many believing he could challenge for the title within the next 18 months.

During his post-fight interview, Islam Makhachev was quick to praise his friend and coach Khabib Nurmagomedov for everything he did in the lead-up to the big night:

“He’s a champion, he has a lot of money now, he has everything, but he’s still a humble guy. He’s coming to USA without his family, he stayed here one, two months, just to help. He don’t take money, nothing, he just come and help all team. He do everything for team.

“We come to USA without him to San Jose, he rent big house for team, he rent lots of cars for team, and nobody paid. He paid for everything. I cannot explain to you about Khabib because he does a lot of stuff but nobody knows this. We all have to tell him thank you.”

Islam Makhachev is an incredibly humble guy. It’s clear to see from anyone’s perspective how much he cares about Khabib and everything he’s done for him. After all, Khabib is committing a lot of time and energy in the name of trying to get Islam Makhachev to the top of the 155-pound division – and he won’t stop until it happens.

Khabib has all the money in the world and, instead of opting to spend it all, he’s going down the route of using it to assist others. That’s the kind of person you want in your corner and, as we saw on Saturday night, Islam Makhachev has taken some incredible steps forward. We think this is probably just the beginning.

Up next, we expect to see him go toe-to-toe with someone in the top 10, and perhaps even the top five.

Denial of responsibility! NewsUpdate is an automatic aggregator around the global media. All the content are available free on Internet. We have just arranged it in one platform for educational purpose only. In each content, the hyperlink to the primary source is specified. All trademarks belong to their rightful owners, all materials to their authors. If you are the owner of the content and do not want us to publish your materials on our website, please contact us by email – [email protected]. The content will be deleted within 24 hours.
Loading...
aheadbest sports newsentireIslamIslam MakhachevKhabibKhabib NurmagomedovMakhachev

Brazilians spend more time on smartphones than rest of the…

NHL Draft trade tracker 2021: Full details on every deal to…