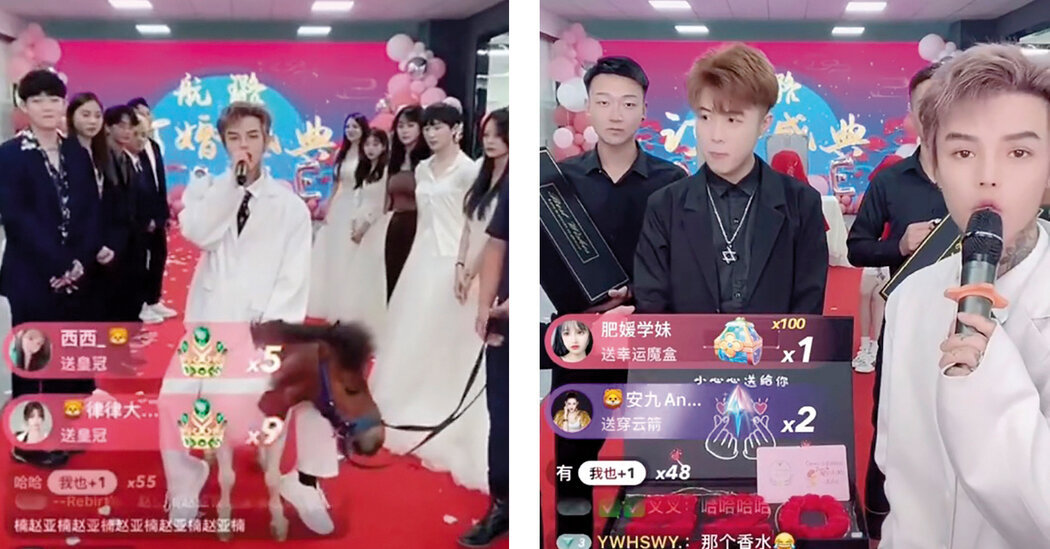 He Promised a Dreamy Wedding Proposal. Fans Got a 5-Hour Sale.

Mr. Yin sold millions through a feature on Kuaishou that allows viewers to buy products touted by influencers on the online retailer JD.com without leaving the video app. It was unclear whether he had any ties to the manufacturers of the products he hawked, or whether brand collaborations and paid promotion have to be disclosed on the Kuaishou platform. During the broadcast, he denied promoting the products for profit. He could not be reached for comment.

While many viewers in China have come to expect, or even seek, a degree of product promotion with their entertainment, Mr. Yin’s use of a major life event as bait crossed the line for some. Many complained online that the livestreamed wedding engagement had turned into a home shopping network show.

One user named OrangeVenus wrote: “99% of the broadcast were dull introductions to merchandise. It’s no different from looking at the promotional web pages on Taobao.”

“Yin Shihang should have been banned long ago,” another said.

But some said that the platform’s punishment was excessive and that they would miss the influencer’s shenanigans.

Mr. Yin had never advertised the marriage proposal as a surprise. He and his girlfriend, Tao Lulu, had broken up and reconciled several times in the past, according to local news outlets. But for their engagement, she had dressed in a white lacy gown and appeared in a teaser video with Mr. Yin to announce the date and time of the special event.

After lurching into the room on the pony, Mr. Yin proceeded to hold up and describe in detail items like a scratch-free mirror, necklaces and lipstick he claimed he had custom-ordered for his girlfriend ahead of May 20, an unofficial Valentine’s Day in China, when romantic partners buy gifts for one another. (The date, 520, sounds vaguely like “I love you” in Mandarin.)

After the engagement scandal, Kuaishou, which bans the “malicious creation of gimmicks to get clicks and likes” and various forms of “vulgarity,” said it would crack down on the creation of sensationalist and “vulgar hype” for the purposes of promoting and selling products.

Denial of responsibility! NewsUpdate is an automatic aggregator around the global media. All the content are available free on Internet. We have just arranged it in one platform for educational purpose only. In each content, the hyperlink to the primary source is specified. All trademarks belong to their rightful owners, all materials to their authors. If you are the owner of the content and do not want us to publish your materials on our website, please contact us by email – [email protected]. The content will be deleted within 24 hours.
5Hourbest technology newsDreamyFansnews update technewsupdatePromisedProposal

Apple targets Sept. 7 for iPhone 14 launch in flurry of…