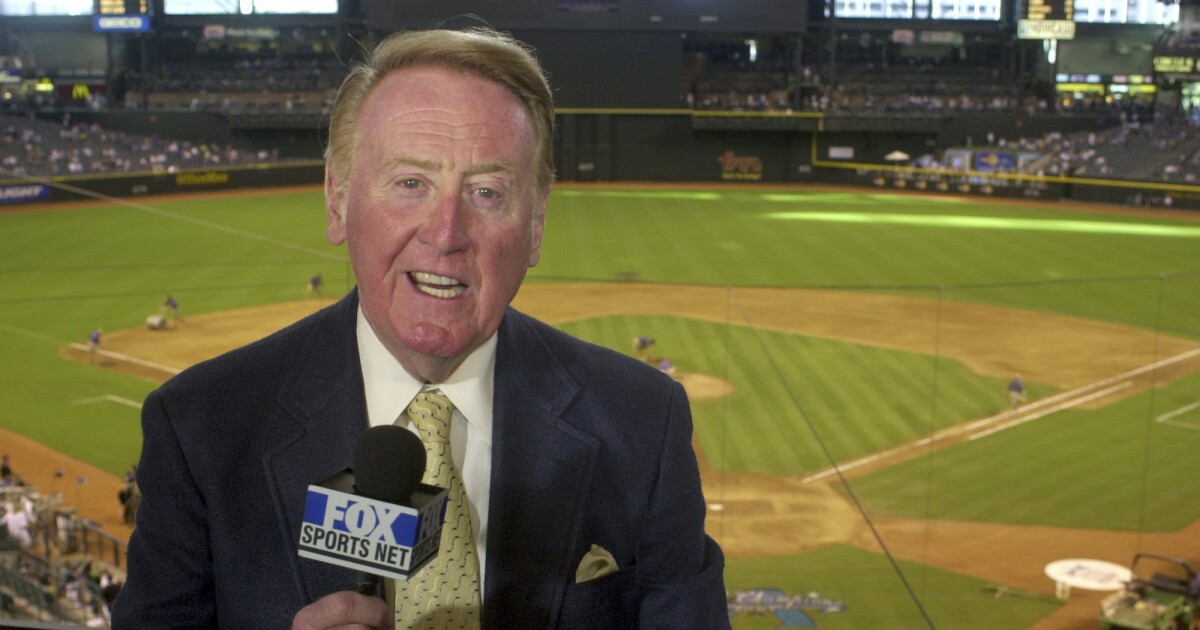 Legendary Dodgers announcer Vin Scully died Tuesday at age 94. Here are some of his most memorable calls and quotes from throughout his celebrated career:

“All year long they looked to him [Kirk Gibson] to light the fire and all year long he answered the demands. High fly ball into right field. She is gone! [pause] In a year that has been so improbable, the impossible has happened.”

“Sometimes it seems like he’s playing underwater.” — on Bobby Bonilla

“There’s a high bouncer over the mound, over second base, Mantilla’s up with it, throws low and wild … Hodges scores, we go to Chicago! [crowd noise for a nice long while] The Cinderella team [1959 Los Angeles Dodgers] of the National League.”

“There’s a little roller up along first, behind the bag! It gets through Buckner! Here comes Knight and the Mets win it!” — 1986 World Series

On his cool demeanor when calling the Brooklyn Dodgers’ only World Series title in 1955: “On the last out of the game in the finale, I said, `Ladies and gentlemen, the Brooklyn Dodgers are the champions of the world.’ Then I stopped and didn’t say another thing. All winter long people asked me, `How could you have stayed so calm?’ Well, the truth is, I was so emotionally overwhelmed by it all that if I had to say another word I think I would have cried.”

“When he runs, it’s all downhill.” — on Maury Wills

“Andre Dawson has a bruised knee and is listed as day-to-day. [pause] Aren’t we all?”

“Football is to baseball as blackjack is to bridge. One is the quick jolt. The other the deliberate, slow-paced game of skill, but never was a sport more ideally suited to television than baseball. It’s all there in front of you. It’s theater, really. The star is the spotlight on the mound, the supporting cast fanned out around him, the mathematical precision of the game moving with the kind of inevitability of Greek tragedy. With the Greek chorus in the bleachers!”

“He pitches as though he’s double-parked.” — on Bob Gibson

“How good was Stan Musial? He was good enough to take your breath away.”

“It’s a mere moment in a man’s life between the All-Star Game and an old-timers’ game.”

“It’s a passing of a great American tradition. It is sad. I really and truly feel that. It will leave a vast window, to use a Washington word, where people will not get Major League Baseball and I think that’s a tragedy.” —on the last “NBC Game of the Week” on Oct. 9, 1989.

“I would come home to listen to a football game — there weren’t other sports on — and I would get a pillow and I would crawl under the radio, so that the loudspeaker and the roar of the crowd would wash all over me, and I would just get goosebumps like you can’t believe. And I knew that of all the things in this world that I wanted, I wanted to be that fella saying, whatever, home run, or touchdown. It just really got to me.”

“Roberto Clemente could field the ball in New York and throw out a guy in Pittsburgh.”

His final words as a Dodgers broadcaster:

“You know, friends, so many people have wished me congratulations on a 67-year career in baseball, and they’ve wished me a wonderful retirement with my family, and now, all I can do is tell you what I wish for you. May God give you, for every storm, a rainbow; for every tear, a smile; for every care, a promise; and a blessing in each trial. For every problem life seems, a faithful friend to share; for every sigh, a sweet song, and an answer for each prayer. You and I have been friends for a long time, but I know, in my heart, I’ve always needed you more than you’ve ever needed me, and I’ll miss our time together more than I can say. But, you know what, there will be a new day, and, eventually, a new year, and when the upcoming winter gives way to spring, ooh, rest assured, once again, it will be time for Dodger baseball. So, this is Vin Scully wishing you a pleasant good afternoon, wherever you may be.”

Denial of responsibility! NewsUpdate is an automatic aggregator around the global media. All the content are available free on Internet. We have just arranged it in one platform for educational purpose only. In each content, the hyperlink to the primary source is specified. All trademarks belong to their rightful owners, all materials to their authors. If you are the owner of the content and do not want us to publish your materials on our website, please contact us by email – [email protected]. The content will be deleted within 24 hours.
best sports newsCallsMemorablenews update sportsnewsupdateQuotesScullyssports news