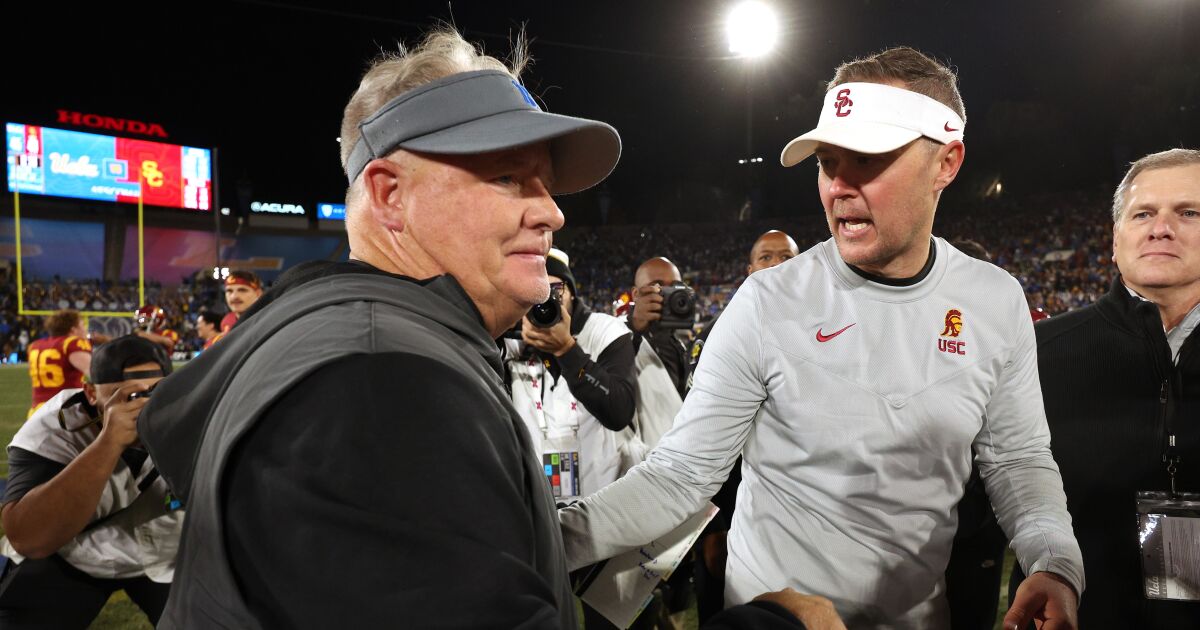 A USC victory over Utah at Allegiant Stadium in Las Vegas would enhance the Bruins’ chances of being selected for the Alamo Bowl, the best possible postseason outcome for a team that finished in a tie for fifth place in the Pac-12 alongside Oregon State.

That scenario would take some leapfrogging, and a lot of fortuitous falling of dominoes between Friday and bowl selection announcements Sunday afternoon. Derrick Fox, president and chief executive officer of the Alamo Bowl, told The Times on Tuesday that the Bruins (9-3 overall, 6-3 Pac-12) remained in play for the Pac-12’s top consolation prize after the College Football Playoff and the Rose Bowl.

“UCLA is definitely attractive,” said Fox, who wasn’t just being polite given that he knew the Bruins’ offense averaged 40 points per game and that running Zach Charbonnet led the nation in all-purpose yardage. “So obviously, a team that has been dynamic and does a lot offensively and fun to watch.”

UCLA spending Dec. 29 in San Antonio to face a Big 12 team likely entails USC winning Friday in Las Vegas. If the Trojans finish 12-1 and are selected for the CFP, the Rose Bowl gets its pick of remaining Pac-12 teams and would take Washington, Utah or Oregon, which finished in a three-way tie for second in the conference standings.

It’s important to note that the Rose Bowl wouldn’t be obligated to take runner-up Utah. In 2016, when Washington defeated Colorado in the Pac-12 title game on the way to the CFP, the Rose Bowl bypassed the runner-up Buffaloes in favor of USC.

Even if USC lost to Utah and the Utes went to the Rose Bowl, there’s a chance the Trojans would be selected for another New Year’s Six bowl. If USC fell to the pool of teams available for the Alamo Bowl, that would eliminate UCLA from consideration given that the Alamo Bowl can’t take any team more than one game behind the top available candidates in the conference standings, and the Trojans finished two games above the Bruins.

In one likely scenario — USC going to the CFP and Washington to the Rose Bowl based on a 10-2 record that includes fewer losses than Utah or Oregon — the Alamo Bowl would be left to pick between Utah, Oregon, UCLA and Oregon State. Oregon went to the Alamo Bowl last season, likely removing the Ducks from consideration given that bowls rarely take the same team two years in a row.

Fox said the Alamo Bowl prioritizes a team’s record, matchup appeal with the opponent, frequency of appearances at the game and likelihood of bringing a large contingent of fans. UCLA last played at the Alamo Bowl in January 2015, beating Kansas State.

The case for UCLA centers on the Bruins’ high-powered offense plus its having beaten Utah handily in October. Yet the Utes would have the cachet of being the Pac-12 runner up in addition to a fan base that traditionally travels better than UCLA’s boosters. History may might also be on Utah’s side given that in the 2016 bowl scenario that could be like this year’s, the Alamo Bowl picked conference runner-up Colorado.

Oregon State, a potential darkhorse candidate, could tout itself as having the strongest finish, capping a three-game winning streak with an upset of rival Oregon.

“All records aren’t necessarily the same,” Fox said. “They may be numerically, but how you get there matters too.”

If the Bruins aren’t selected for the Alamo Bowl, they would likely drop to either the Las Vegas Bowl or the Sun Bowl. The Holiday Bowl gets the next pick after the Alamo Bowl but probably doesn’t want UCLA given it chose the Bruins last season only for the team to back out of its game against North Carolina State hours before kickoff over COVID-19 concerns.

UCLA could be an attractive option for the Las Vegas Bowl given that it’s staged in the hometown of Bruins quarterback Dorian Thompson-Robinson, who said he would be less likely to opt out of a bowl game if he could complete his college career in front of so many friends and family. The Action Network currently projects Oregon State to face Ole Miss in the Las Vegas Bowl, with UCLA playing Duke in the Sun Bowl.

Known player opt-outs don’t necessarily dissuade bowls from taking teams; Fox noted that Oregon edge rusher Kayvon Thibodeaux had announced he would not play in the postseason before the Alamo Bowl picked the Ducks to face Oklahoma last year.

Fox said the Alamo Bowl selection committee would have only about 15 minutes to make its pick after learning which Pac-12 teams are available, leading to lots of what he called “scenario-ing” before the formal announcement around 1:30 p.m. PST Sunday.

“This is kind of a unique year in that you’ve got really six teams that are 6-3 or better in conference,” Fox said, “so that’s really a tremendous year and really Oregon State and UCLA don’t come into the mix unless USC is off the table, if that makes sense, on the one-game differential.”

That leaves the Bruins and Beavers united Friday. Fight on.

Denial of responsibility! NewsUpdate is an automatic aggregator around the global media. All the content are available free on Internet. We have just arranged it in one platform for educational purpose only. In each content, the hyperlink to the primary source is specified. All trademarks belong to their rightful owners, all materials to their authors. If you are the owner of the content and do not want us to publish your materials on our website, please contact us by email – [email protected]. The content will be deleted within 24 hours.
best sports newsBowlFridayGameHeresnews update sportsnewsupdateReach

Sony Mocopi Movement Trackers Are Like AirTags For VR – SlashGear