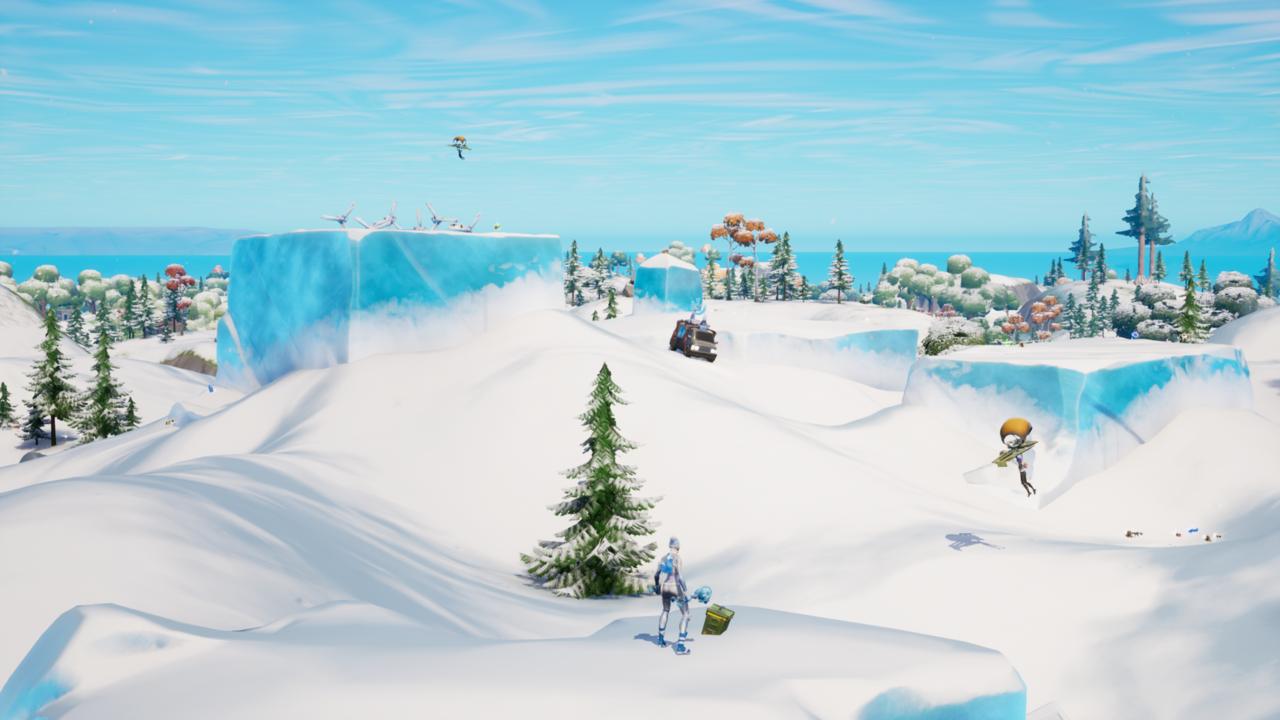 Here’s When Tilted Towers Is Coming To Fortnite Chapter 3

We’re well into Fortnite Chapter 3 now, with the Season 1 Week 5 challenges ready to be tackled this week. But many fans are still asking the all-important question: When is Tilted Towers coming back? The beloved drop zone is second to none in Fortnite’s illustrious history, and many have noticed that the giant ice blocks currently sitting in the middle of the map are situated in such a manner that reveals a grand secret beneath the ice: Tilted Towers is coming back. Here’s what we know about its specific return date.

The named location has not been mentioned officially by Epic Games just yet, but we know from dataminers that the location is 100% returning this season. In fact, it should be as early as this month. According to Hypex, the world’s foremost Fortnite leaker, the snow will begin to melt across the island this week.

ALL 9 SNOW MELTING STAGES 🔥
Looks like the snow will start melting on January 7th at 9AM UTC, and Tilted Towers will appear on stage 6 👀 And it looks like ALL the snow will melt unfortunately, unless if Epic changes this next update.. pic.twitter.com/oF2N8oKw5Y

Across eight stages, the new Fortnite island will go from a winter wonderland to much greener pastures. Along the way, Tilted Towers will be unearthed and eventually added back to the map as a named location offering loot and new sights to see. This puts the return of Tilted Towers scheduled for sometime this month, likely on a Tuesday morning just after a routine content update.

Depending on how quickly the island’s thawing occurs, that should put Tilted Towers’ reemergence on schedule for something like January 18, or perhaps a week later on January 25. The island is scheduled to be totally without a single snowflake before February, so undoubtedly, Tilted Towers will be back just as soon.

The return of Tilted Towers is something Epic has teased many times, often including it in official promo art since its disappearance back in Chapter 1 of Fortnite. Now that we know it’s coming back, the question becomes whether Epic’s servers can withstand the rush of players likely to flood the game once the locale is available.

We’ve already seen the developer resort to a queue system twice during Chapter 3, Season 1, including its huge launch day and during Winterfest, plus the arrival of Spider-Man’s Web Shooters briefly crashed the game in December. Can Fortnite’s servers survive the return of Tilted Towers? We’ll know later this month.

Denial of responsibility! NewsUpdate is an automatic aggregator around the global media. All the content are available free on Internet. We have just arranged it in one platform for educational purpose only. In each content, the hyperlink to the primary source is specified. All trademarks belong to their rightful owners, all materials to their authors. If you are the owner of the content and do not want us to publish your materials on our website, please contact us by email – [email protected]. The content will be deleted within 24 hours.
best games newsChaptercomingfortnitegame updategames newsHeresnews update games