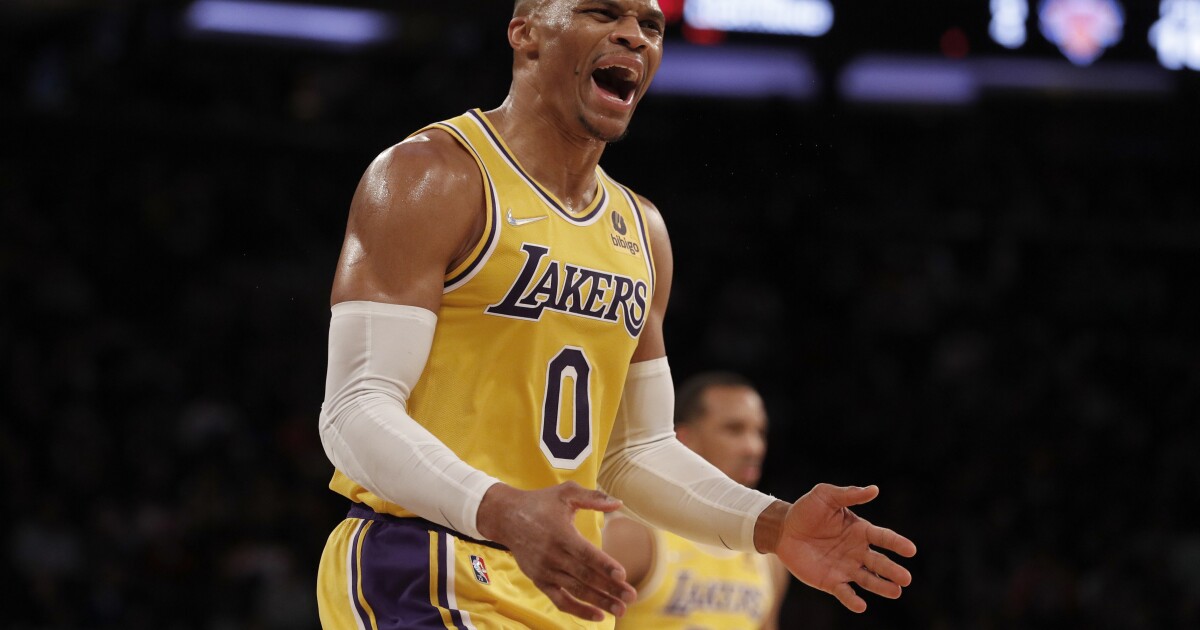 Davis had been asked about what Russell Westbrook could do to more often be the player who scored 18 points in the third quarter of the 106-100 defeat to the New York Knicks on Tuesday night, the version of him that carried the Lakers to a comeback victory over the Detroit Pistons two nights earlier.

“He’ll figure it out,” Davis resumed.

Davis paused for a beat, then addressed the heart of the matter.

“You know, I think the difference is both games there’s no [LeBron James],” Davis said. “We just need to figure out a way where he does that no matter who’s on the floor.”

James served a one-game suspension in the nationally televised game Tuesday at Madison Square Garden. Westbrook’s offensive outburst in Detroit came after James was ejected for hitting Isaiah Stewart in the face.

More than a month into the season, Westbrook remains the most perplexing figure on an unevenly constructed team that is now 9-10.

He is both a source of concern and optimism, his five turnovers in the opening half eliciting pessimism and backing the belief these Lakers were doomed upon their inception and his 31-point, 10-assist, 13-rebound triple-double offering a tantalizing possibility of what they can be if he learns to co-exist with their two other superstars.

How Westbrook played could be directly linked to how the Lakers played. He played an uninspired first half and they were behind 10-0 less than two minutes into the game and by as many as 25. He dominated the third quarter and at one point erased the entire deficit.

Asked how he committed only one turnover in the second half against the Knicks, Westbrook remarked, “It’s funny you mention turnovers. I haven’t heard you ask me that question for five games. You know why?”

Because he was taking care of the ball?

Westbrook, who turned the ball over a combined 12 times in his previous four games, flashed a wide smile.

He said he and the Lakers are still in the early stages of learning about each other.

“It’s a process for everybody, including myself, just the pace, the speed,” Westbrook said.

He has warned his new teammates the tempo is about to increase.

“As the season goes along, I tell the guys, for me, my pace picks up,” he said.

“There are certain sets that we are looking at, certain spacing alignment, whether to bring a big to the ball, keep him iso on the wing,” Vogel said. “There’s a few plays that we run in the middle of the floor that he seems to have good rhythm with.”

“He has to be himself,” Davis said. “I tell him before every game, ‘Be nobody but yourself. That’s why we brought you here.’”

As hard-headed as Westbrook looks from the outside, Davis described him as being overly accommodating of his new teammates.

“A lot of times, he tries to go passive and starts passing the basketball and looking for other guys, which is great, but it kind of takes him out of rhythm,” Davis said. “He can do the same looking for guys while being aggressive.”

Which is what he did in that third quarter. In addition to making seven of 10 shots in the period, he also registered three assists.

Davis observed that Westbrook’s turnovers are a byproduct not of being overly attack-minded, but of not being attack-minded enough.

“When he goes and looks to pass and [isn’t] looking at the rim, that’s where a lot of his turnovers come from, him not being aggressive,” Davis said.

Westbrook said he was upbeat about how his on-court communication with Davis was improving.

Playing with James could be the greater challenge.

The best quarter the Lakers have played this season might have come earlier on this trip in Boston, when James returned from an eight-game absence because of a strained abdominal muscle.

With James as the team’s primary ballhandler, the Lakers built a 38-30 lead in the first quarter. But Westbrook disappeared and he never made his presence felt in the game, finishing with only 12 points.

What Westbrook, James and Vogel must figure out is whether the version of Westbrook who controlled the game in the third quarter Wednesday can share a stage with James and thrive without the ball always in his hands. Davis thinks he can. He better be right. Whether this season can be salvaged depends on it.

Denial of responsibility! NewsUpdate is an automatic aggregator around the global media. All the content are available free on Internet. We have just arranged it in one platform for educational purpose only. In each content, the hyperlink to the primary source is specified. All trademarks belong to their rightful owners, all materials to their authors. If you are the owner of the content and do not want us to publish your materials on our website, please contact us by email – [email protected]. The content will be deleted within 24 hours.
best sports newsDominantHernándezLakersnews update sportsnewsupdateRussellsports news

Is It Time For Shikhar Dhawan To Get His IPL Captaincy Due? | Cricket News