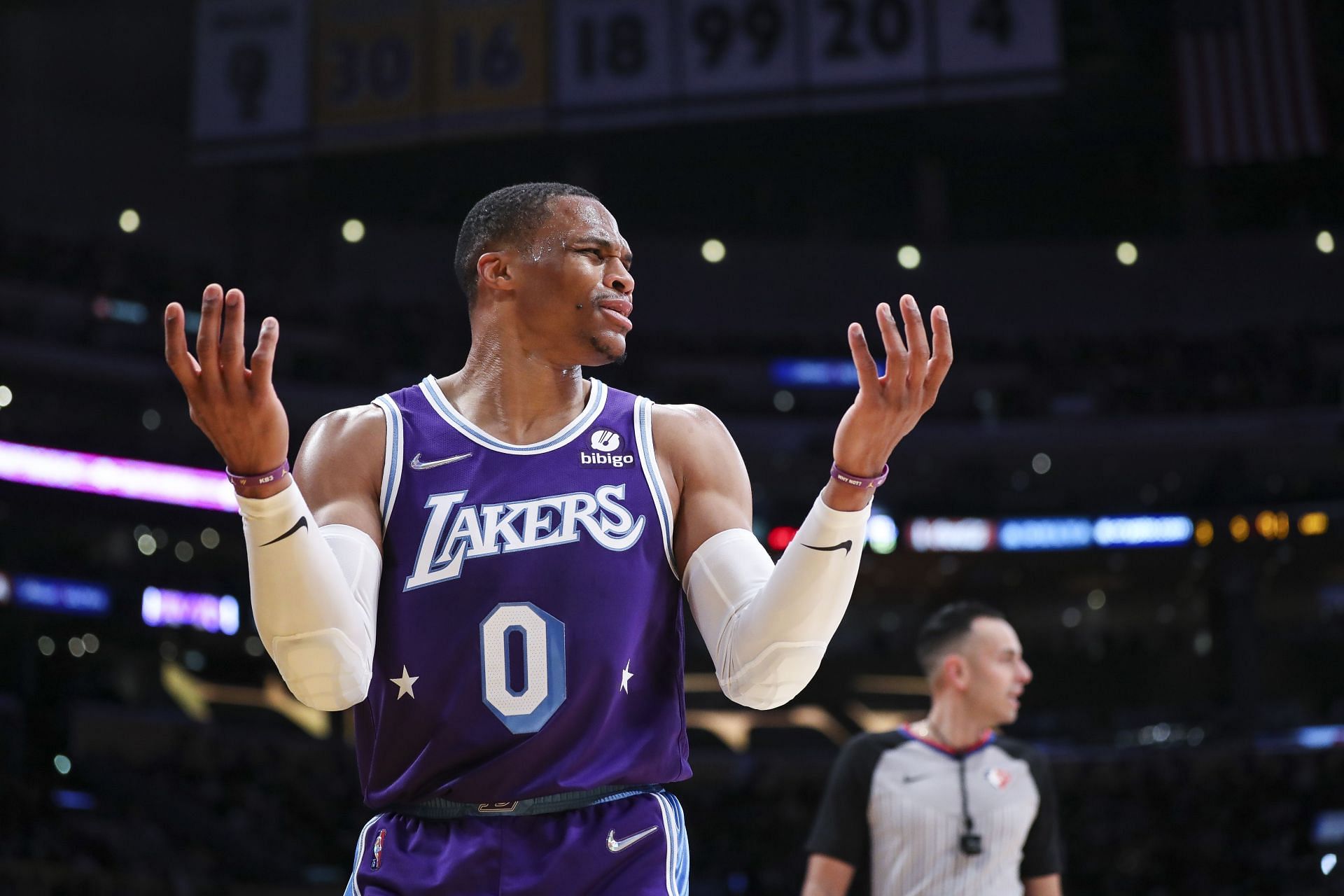 In their last fixture the LA Lakers went on the road to take on the Sacramento Kings. Superstar point guard Russell Westbrook has come under fire after his poor outing, posting only 8 points in 37 minutes of game time.

Although he registered 12 rebounds and 6 assists, he netted only 2 of 14 attempts from the field and recorded 0 of 5 shots from beyond the arc. His form continues to dip, having recorded 6 points in the Lakers’ previous game against the Memphis Grizzlies. Where he netted 2 field goals from 14 attempts and had no threes on the board.

On the “Undisputed” show, Skip Bayless reacted to the 2017 MVP’s awful performance, which has cost his team yet another loss. Bayless referred to Westbrook’s dream of returning to the Lakers as seeming like the player’s worst nightmare.

“This is classic be careful what you wish for Russell Westbrook. His dream, his whole career was to return home and play point guard for the Lakers he grew up living and dying for. He’s really the only Lakers who grew up in the neighborhood… His dream came true and it became his worst nightmare.”

Skip continued on to say that he believes the nine-time All-Star’s tenure and awful form with the Lakers is tarnishing his legacy. He also insists that the man known as “Mr. Triple Double” deserves the harsh criticism he’s currently facing.

“He deserves the criticism. I don’t blame Lakers Nation for condemning him because he has turned into Russell Westbrick on the biggest stage.”

Although Bayless mentioned Westbrook’s earlier comments over his turnover troubles, the sports analyst went on to end his remarks by saying Westbrook is being “exposed” for the first time in his career.

“And when he says things like, “Hey, I am allowed to miss shots and make turnovers,” not that many. Because you’re killing the team that you love. So to me, I think his legacy is getting tarnished because he’s getting exposed for the first time in 14 years.”

“His legacy is getting tarnished and he’s getting exposed.”

“His legacy is getting tarnished and he’s getting exposed.” — @RealSkipBayless on Kings jumbotron clowning Russell Westbrook after 2-14 shooting night https://t.co/XyOO26GZ7o

The LA Lakers suffered an 8-point defeat against the Memphis Grizzlies in a Sunday night fixture. LeBron James’ 35 points performance wasn’t enough to swing the advantage for the Lakers.

Russell Westbrook was trolled with “Cold As Ice” blaring over the arena speakers every time he missed a shot during the Kings game. tmz.com/2022/01/13/rus…

Russell Westbrook was trolled with “Cold As Ice” blaring over the arena speakers every time he missed a shot during the Kings game. tmz.com/2022/01/13/rus…

Three days later, they would take on the Sacramento Kings in an away game at the Golden 1 Center. Going up against one of the weakest teams in the Western Conference, the Lakers were looking to get back to winning ways but were met with a shocking result. The Kings secured a 9-point victory, winning 125-116, as De’Aaron Fox led his team with 29 points.

Russell Westbrook put up yet another terrible performance, leaving James and Malik Monk to carry the team. He continues to lead the league with the most turnovers, having recorded 185 turnovers thus far.

Russell Westbrook over his last 3 games:

Denial of responsibility! NewsUpdate is an automatic aggregator around the global media. All the content are available free on Internet. We have just arranged it in one platform for educational purpose only. In each content, the hyperlink to the primary source is specified. All trademarks belong to their rightful owners, all materials to their authors. If you are the owner of the content and do not want us to publish your materials on our website, please contact us by email – [email protected]. The content will be deleted within 24 hours.
BasketballBaylessbelievesbest sports newsDreamLakersLegacyLos Angeles Lakers

Carlos Alcaraz finding his feet at Wimbledon and could be…

One of the BEST PlayStation and Switch games is coming to…

“Good News for The National Lottery,” Allwyn Responds to…