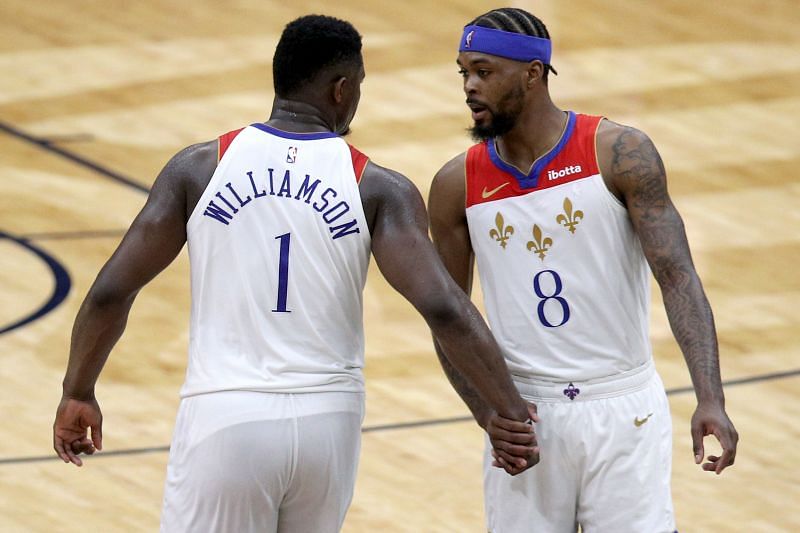 One player the New Orleans Pelicans could attempt to acquire is Kristaps Porzingis, who is rumored to be disillusioned with his position on the Dallas Mavericks roster. If the New Orleans Pelicans could strike a deal with the Mavericks for Porzingis, their squad would then contain a versatile big-3 which is often considered the recipe for championship success, or at least contention.

Imagine a big-man rotation of Kristaps Prozingis and Jonas Valancuinas and how both the first and second unit could commit to playing a perimeter-based brand of offense. For a player like Zion Williamson, who dominates the paint and can steamroller his way through the lane, that level of spacing is almost a cheat code.

Similarly, Brandon Ingram’s three-level scoring game would be further buoyed by the spacing that two stretches five’s could provide. As for Kristaps Prozingis, the biggest question would be whether he was willing to be the team’s third option.

Most of the rhetoric surrounding Kristaps Porzingis is that he’s unhappy at his lack of touches within the offense; he wants to be more integrated into the schematics of a team rather than be a pick-and-pop threat who can attack close-outs on occasion.

New Orleans may have some concerns surrounding Kristaps Porzingis’ injury history, though, which may play into their hands should Dallas be looking to move on from their second star. Porzingis missed the entire 18-19 NBA season with an ACL injury, and has failed to play in more than 50% of the Mavericks games in the two subsequent seasons. So, despite the 7’3” big-mans undouted skill, his market value should be fairly reasonable – especially when you factor in contract value.

Ideally, David Griffin would like to obtain a third star to pair with Ingram and Zion Williamson, following rumors that Williamson is already unhappy at how the organization is being run. But taking a gamble on a player like Kristaps Prozingis is a risky move.

How a Kristaps Porzingis trade could open up the floor for Zion Williamson at the New Orleans Pelicans: Spacing

Sure, from an on-court perspective, Zion Williamson would thrive at the four with Brandon Ingram playing small forward and Kristaps Porzingis playing the 5. As a point-forward, Zion Williamson could continue to develop his playmaking skills with two elite scorers surrounding him, and continue to be a league-leading presence around the rim.

The downside is that if Porzingis continues to miss large portions of the season, the New Orleans Pelicans will be left with little choice but to make the best out of a bad situation.

Draft assets are always great in trade discussions, and the New Orleans Pelicans have a treasure chest full of those. However, you still need contracts (players) for salary matching purposes, and any move for Porzingis would clear the deck in that regard.

From a numbers standpoint, Kristaps Porzingis is a big-man who doesn’t clog the paint, rather he likes to get his work done in the mid-range area or from beyond the three-point line. According to Cleaning The Glass, 38% of Porzingis’ offense came from the mid-range area last season, presumably as he beat close-outs and attacked the space behind his defender. Another 35% of his offense came from deep, with Porzingis preferring to work above the break or on the wing, rather than in the corners.

Zion Williamson would have the best spacing of his young career should the New Orleans Pelicans pull the trigger on a deal of this magnitude, and would thrive in the additional space created by a legitimate five-out offense.

Zion Williamson would also be re-assured that David Griffin and the New Orleans Pelicans front office are committed to building a contending team around him, and it may stave off Zion Williamson’s reported desire to leave the franchise.

New Orleans can’t afford to lose a second generational talent so soon after seeing Anthony Davis head for the Los Angeles Lakers. It would almost certainly cement the team as one of the most undesirable destinations in the NBA – especially considering how rare it is to hit on players such as Zion Williamson and Anthony Davis via the draft.

Zion Williamson needs help, especially if he’s going to be given the room to continue developing that he needs. The pressure of leading a franchise out of the doldrums is firmly on Zion Williamson’s shoulders. Without a third star, both he and Brandon Ingram may become disgruntled at merely competing for a play-in tournament spot – especially now that their close friend Lonzo Ball has taken his talents to Chicago.

So it may be a risk, but the New Orleans Pelicans trading for Kristaps Porzingis could be exactly what Zion Williamson and the franchise need. I just wonder how Porzingis would deal with an even smaller role than he already has in Dallas.

Loading...
Denial of responsibility! NewsUpdate is an automatic aggregator around the global media. All the content are available free on Internet. We have just arranged it in one platform for educational purpose only. In each content, the hyperlink to the primary source is specified. All trademarks belong to their rightful owners, all materials to their authors. If you are the owner of the content and do not want us to publish your materials on our website, please contact us by email – [email protected]. The content will be deleted within 24 hours.
Loading...
Basketballbest sports newsDallas MavericksfeaturefloorKristapsKristaps PorzingisNBA News