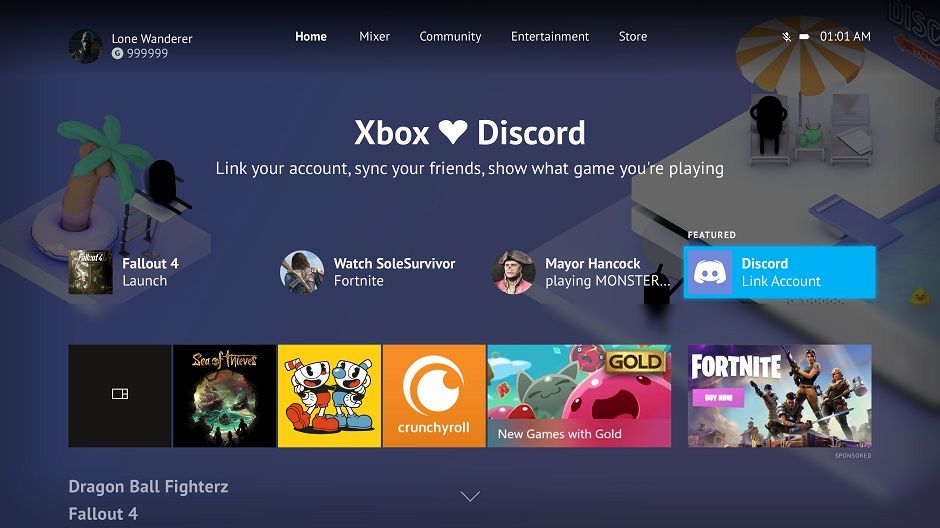 How to Use Discord on Xbox One

The Discord on Xbox One app is the perfect way to keep in touch with your friends while gaming, and make sure they’re up to date on all your latest Xbox exploits. It doesn’t matter who you are or what you’re playing, Discord is there for you.

And it’s not just with fellow Xbox gamers. Discord lets you stay in touch with tens of millions of PC gamers — and maybe one day PlayStation players will join the fold now Discord is coming to PS5. Discord’s popularity dwarfs other gamer-friendly apps like TeamSpeak or Skype, and makes communicating and coordinating an absolute breeze. Plus, setting up Discord on Xbox One is very simply, here’s how to do it.

Discord lets gamers communicate with voice and text, create parties and groups, and see what all their friends are playing. Previously that last part was limited to PC gamers, but with Xbox One integration all Discord users can see what their Xbox-toting friends are enjoying.

On your Xbox One, select your gamertag in the upper left-hand corner of your screen. Choose the Settings option, which is located under both the Home and System menus. From there, click on Account and select Linked social accounts, after which you’ll be prompted to enter your account’s passkey. Once you’ve done that, select the Discord tile to begin the account-linking process.

Via the Discord app on your phone or desktop, select the Settings option, which is represented by a gear icon. After tapping the gear, choose Connections and then Add. Once you have done that, select the Xbox logo that appears.

Once you’ve selected the Xbox logo on the Discord app, a PIN will appear on your Xbox One’s TV screen. Enter it on the app. After it’s entered, your accounts should be linked instantly.

Discord on Xbox One: Overall impressions

As neat as it is to have linked Xbox and Discord profiles, Xbox’s Discord integration is severely limited. Given the app has been available on Xbox One for over three years now, there’s no telling when the situation might improve.

Right now the only this this cross-platform Discord integration can do is show what you and your friends are playing on Xbox One. And only Xbox One, because Discord isn’t available on Xbox Series X or Series S.

This may be useful for coordinating your gaming sessions with friends, but it’s only a small sample of what Discord has to offer on PC. In fact the lack of cross-platform voice chat is a huge omission when Microsoft brought the service into the Xbox ecosystem. Communication is a huge part of why Discord is so popular after all.

Without that feature, and without parties and groups, the Xbox One’s barebones Discord integration is hardly what you’d call a must-have.

Currently, from either the PC or mobile Discord app, the only functionality of this new cross-platform integration is that you can see what your friends are playing on Xbox One.

Then again, if you’re an Xbox gamer and have a lot of friends who tend to play on PC, it might be worth the 5-minute setup time to link accounts and give your pals an easy way to see when you’re gaming.

Denial of responsibility! NewsUpdate is an automatic aggregator around the global media. All the content are available free on Internet. We have just arranged it in one platform for educational purpose only. In each content, the hyperlink to the primary source is specified. All trademarks belong to their rightful owners, all materials to their authors. If you are the owner of the content and do not want us to publish your materials on our website, please contact us by email – [email protected]. The content will be deleted within 24 hours.
Loading...
best technology newsdiscordnews update technewsupdatetech newstech updateXbox

Framework laptop review: This DIY laptop wants you to take it apart and repair it

Tokyo 2020: Gagan Narang reveals how his academy made Elavenil Valarivan a force to reckon with in shooting