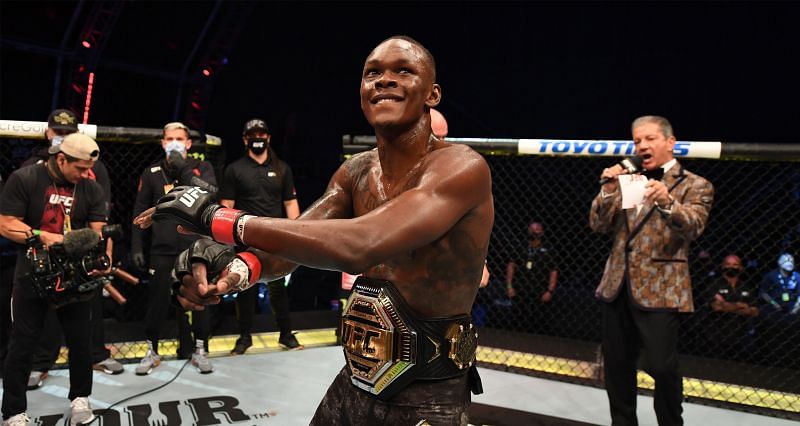 UFC middleweight champion Israel Adesanya hints at taking the Khabib Nurmagomedov route and retiring from prizefighting before time takes its toll. One of the most active fighters on the UFC roster, Israel Adesanya will compete in his 11th UFC fight at UFC 263 since making the promotional debut in February 2018. While most fighters tend to compete less frequently after achieving the champion status, Adesanya’s activity level is yet to slow down.

In a recent interview with Jeff Sainlar, Israel Adesanya was asked why he likes to be an active champion. The Last Stylebender said:

“Coz I don’t have long in this game. I want to fight as much as I can, while I still can, you never know. I’ve fought over a hundred fights in my career. So, yeah, I realize, even though I look young and I am kind of like in the stride of my prime right now, I still feel I wanna leave the game before the game leaves me. So yeah, while I’m here, while I’m hot, while I’m fresh, stay fighting. I just don’t want to sit down,” Israel Adesanya said.

A great number of MMA legends have severely hurt their legacy by staying in the sport long after the sport passes them. However, fighters like Khabib Nurmagomedov and Henry Cejudo have hung up their gloves while being at the absolute top of their game in recent times. UFC welterweight champion Kamaru Usman and now Israel Adesanya have hinted at retiring from the sport before it catches up with them, essentially setting a positive precedent for the up-and-coming fighters.

Adesanya’s quest to become the fifth simultaneous two-division UFC champion ended in a unanimous decision loss to light heavyweight champion Jan Blachowicz at UFC 259 in March 2021. However, the middleweight division has a number of high-profile opponents lined up to challenge for The Last Stylebender’s belt.

While rematches with Marvin Vettori and former middleweight champion Robert Whittaker are the most intriguing fights that Israel Adesanya will have to compete in the near future, Darren Till, Jared Canonnier and Kevin Holland are rising contenders that seem to be on a collision course with the champ.

Denial of responsibility! NewsUpdate is an automatic aggregator around the global media. All the content are available free on Internet. We have just arranged it in one platform for educational purpose only. In each content, the hyperlink to the primary source is specified. All trademarks belong to their rightful owners, all materials to their authors. If you are the owner of the content and do not want us to publish your materials on our website, please contact us by email – [email protected]. The content will be deleted within 24 hours.
activeAdesanyabest sports newschampiondontExplainsGameIsrael

Brewers’ Freddy Peralta has no-hitter through 6 on birthday

Where to watch CONMEBOL World Cup 2022 Qualifying fixtures of Argentina, Brazil on Live TV in India?