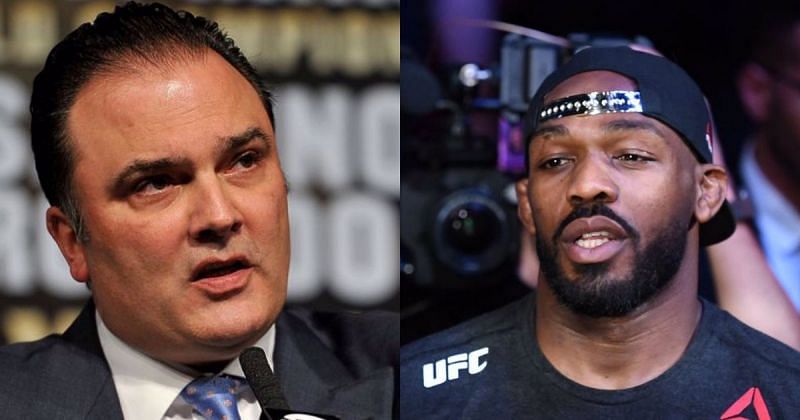 “I was, of course, shocked” – Jon Jones’ adviser Richard Schaefer opens up on recent arrest

Jon Jones was recently arrested and charged with battery domestic violence and injuring or tampering with a vehicle. Jones, 34, was taken into custody by the Las Vegas Metropolitan Police Department at 5:45am, just hours after he was inducted into the UFC Hall of Fame.

Jon Jones was arrested early Friday morning by the Las Vegas Metro PD, a police spokesperson told ESPN. Jones is being charged with battery domestic violence and injuring and tampering with a vehicle. More info coming to @espn.

Jon Jones was arrested early Friday morning by the Las Vegas Metro PD, a police spokesperson told ESPN. Jones is being charged with battery domestic violence and injuring and tampering with a vehicle. More info coming to @espn.

Jones’ adviser Richard Schaefer, who has been negotiating his return with the UFC, has now weighed in on the arrest. According to Schaefer, Jon Jones’ arrest came as a shock to him as everything was going great until then. Schaefer told SunSport in a recent interview:

“Everything was really going very well. When he arrived in Vegas, everything was fine. I think when you look at the videos, the night of the hall-of-fame induction, he was great. So everything was going great. And then, the next day when I wake up, I wake up to this news and I was of course shocked.”

Jon Jones hired Richard Schaefer in May to negotiate with the UFC regarding his much anticipated return to the octagon. This also ended Jones’ 11-year relationship with his former reps, First Round Management.

Schaefer has now claimed that Jones is one of the ‘nicest’ people he has ever come across. Schaefer was also unwilling to make a judgment on Jon Jones before the matter played out legally. Tallying his statement with UFC president Dana White, Richard Schaefer further told SunSport:

“Jon is one of the most genuine and nicest people I have ever met. So yeah, I was, of course, shocked. And now we just need to see how this whole thing is going to play out legally before really making a rush to judgement. And I think the UFC is taking that same stance. I saw an interview with Dana (White) yesterday and he agrees with me in that we just have to see in how this whole thing plays out. And then we can make our opinions and we can do like – we just need to see. I can’t really, from a legal point of view, of course as you can imagine, talk about it.”

Denial of responsibility! NewsUpdate is an automatic aggregator around the global media. All the content are available free on Internet. We have just arranged it in one platform for educational purpose only. In each content, the hyperlink to the primary source is specified. All trademarks belong to their rightful owners, all materials to their authors. If you are the owner of the content and do not want us to publish your materials on our website, please contact us by email – [email protected]. The content will be deleted within 24 hours.
adviserarrestbest sports newsJonJon JonesJonesMMAMMA News Round-Up

Microsoft reveals pricing and other details for Office 2021