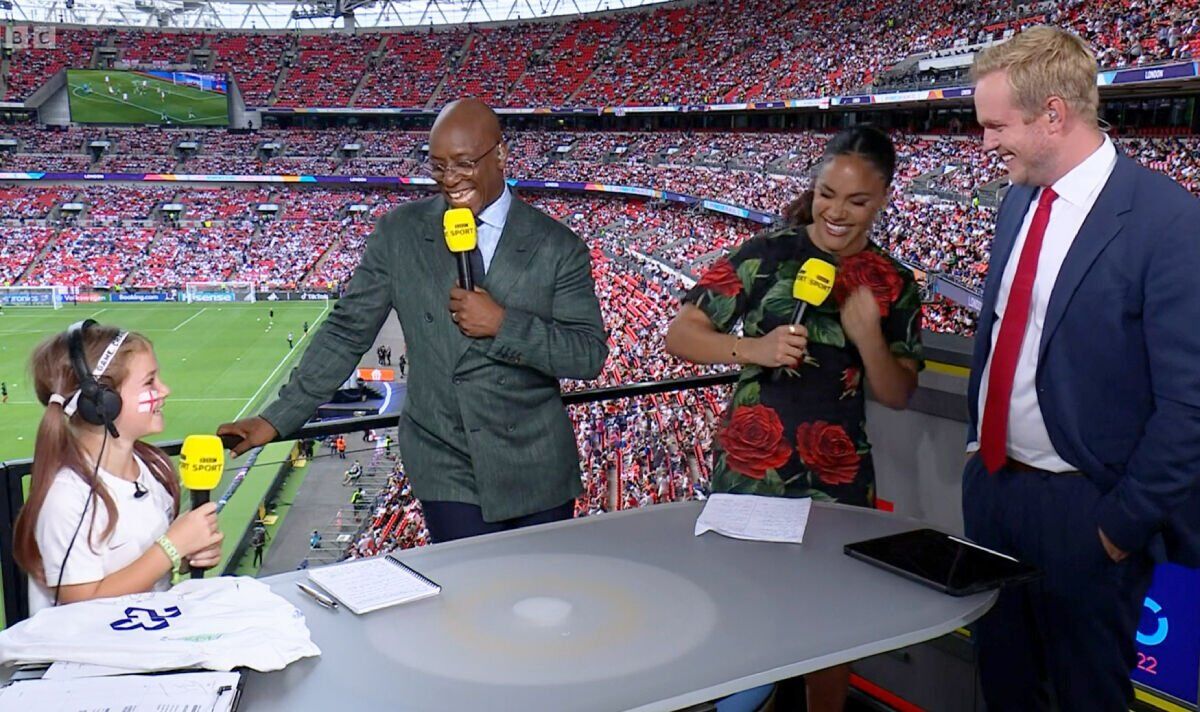 BBC pundits Ian Wright and Alex Scott were left in stitches by young England fan Tess ahead of the Euro 2022 final on Sunday. Tess, who went viral on social media following her dancing at the semi-final last week, also received a message and gift from her favourite player Alessia Russo.

The eight-year-old was caught on camera dancing to Sweet Caroline after the Lionesses beat Sweden 4-0 at Bramall Lane. She appeared on BBC Breakfast the following morning and also live on the coverage of the second semi between Germany and France.

The young fan was given tickets to the final and she joined Wright, Scott, Arsenal manager Jonas Eidevall and presenter Gabby Logan in the BBC studio shortly before kick-off at Wembley. And Logan had a surprise for her.

To which Tess replied: “Yeah. I feel like she could do a lot of things to help our team.”

Logan continued: “Yeah she’s been doing brilliantly hasn’t she. Actually, speaking of her, I’ve got a little message for you. Just have a little look over there will you.”

The coverage then cut to a pre-recorded message from Russo. The England star said: “Hi Tess, it’s Alessia here. Just wanted to say a massive thank you for all your support this summer.

“We’ve loved hearing you on the TV and on Twitter. So much so I’d like to give you this shirt just to say thank you. I hope you love it and we hope to see you soon.”

Tess reacted in astonishment as Logan handed her the shirt with Russo’s name and number on. England legend Scott then spoke to Tess and asked if she would be dancing again today.

To which Tess replied: “Yes, definitely!” Her response had both Wright and Scott in stitches.

Tess was feeling confident ahead of the match. She said: “I’m feeling very positive and I feel like we can win this match.”

And when asked for a prediction, she reckoned Sarina Wiegman’s side would come out on top, adding: “Well I think 3-2 but at the same time I just hope we win it.”

Denial of responsibility! NewsUpdate is an automatic aggregator around the global media. All the content are available free on Internet. We have just arranged it in one platform for educational purpose only. In each content, the hyperlink to the primary source is specified. All trademarks belong to their rightful owners, all materials to their authors. If you are the owner of the content and do not want us to publish your materials on our website, please contact us by email – [email protected]. The content will be deleted within 24 hours.
8yearoldAlessiaAlexbest sports newsenglandFanGiftIan