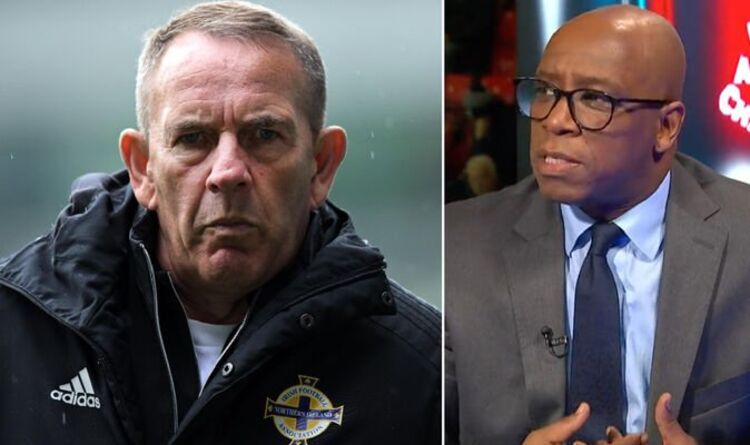 Ian Wright has criticised Northern Ireland Women boss Kenny Shiels for his startling claim that “girls and women are more emotional than men” after seeing his side capitulate against England on Tuesday night. Northern Ireland were thrashed 5-0 at Windsor Park after conceding four second-half goals.

England took a one-goal advantage into the interval after Lauren Hemp’s mis-hit shot midway through the first half looped over home keeper Jacqueline Burns and into the top corner. And the visitors moved up a gear after the break as Ella Toone doubled her side’s lead after ghosting in at the far post. Hemp scored a third as she rounded Burns and fired into an empty net on the hour mark, before Georgia Stanway added a late brace.

And following the match, Shiels offered a bizarre explanation as to why his side had struggled after the break. “I felt [England] were struggling a wee bit at times to open us up until the psychology of going 2-0 up in the women’s game,” Shiels said. “I’m sure you will have noticed if you go through the patterns – when a team concedes a goal, they concede a second one in a very, very short space of time.

“[It happens] right through the whole spectrum of the women’s game, because girls and women are more emotional than men. So they take a goal going in not very well. When we went 1-0 down we tried to slow it down to give them time to get that emotional imbalance out of their heads. That’s an issue we have. Not just in Northern Ireland but all of the countries in the world.”

But Arsenal icon Wright, who regularly appears on BBC’s Match of the Day, took to Twitter to call out Shiels. He wrote: “Kenny Shiels talking foolishness! Talking about emotional women! Didn’t that man see how many times I was crying on the PITCH!”

Shiels’ controversial comments will not go down well in women’s sport or indeed among women’s rights campaigners. And it is unknown at this stage how his words will be viewed by the Irish FA.

Northern Ireland were playing in front of 15,348 fans in Belfast, which was a record for a women’s match in the country. But their defeat means they are no longer able to qualify for next year’s Women’s World Cup, which is due to take place in Australia and New Zealand.

Meanwhile, former Everton and Liverpool star Courtney Sweetman-Kirk has called for Northern Ireland to show their resilience for longer spells of matches. “It wasn’t great in the first half – they could’ve been more dynamic,” the ex-striker said. “But credit to Northern Ireland, they banked up and made it difficult – so England couldn’t find the spaces initially.

“It was much better in the second half, being clinical in front of goal and the movement was much better. It’s job done for England, is the best way to put it. Being dogged and determined in your defending and making life difficult for a better team is something you’ve just got to do and the question for Northern Ireland is whether they can do that on a longer period in a game.”

Denial of responsibility! NewsUpdate is an automatic aggregator around the global media. All the content are available free on Internet. We have just arranged it in one platform for educational purpose only. In each content, the hyperlink to the primary source is specified. All trademarks belong to their rightful owners, all materials to their authors. If you are the owner of the content and do not want us to publish your materials on our website, please contact us by email – [email protected]. The content will be deleted within 24 hours.
best sports newsBossclaimemotionalfemalefootballersIanIreland