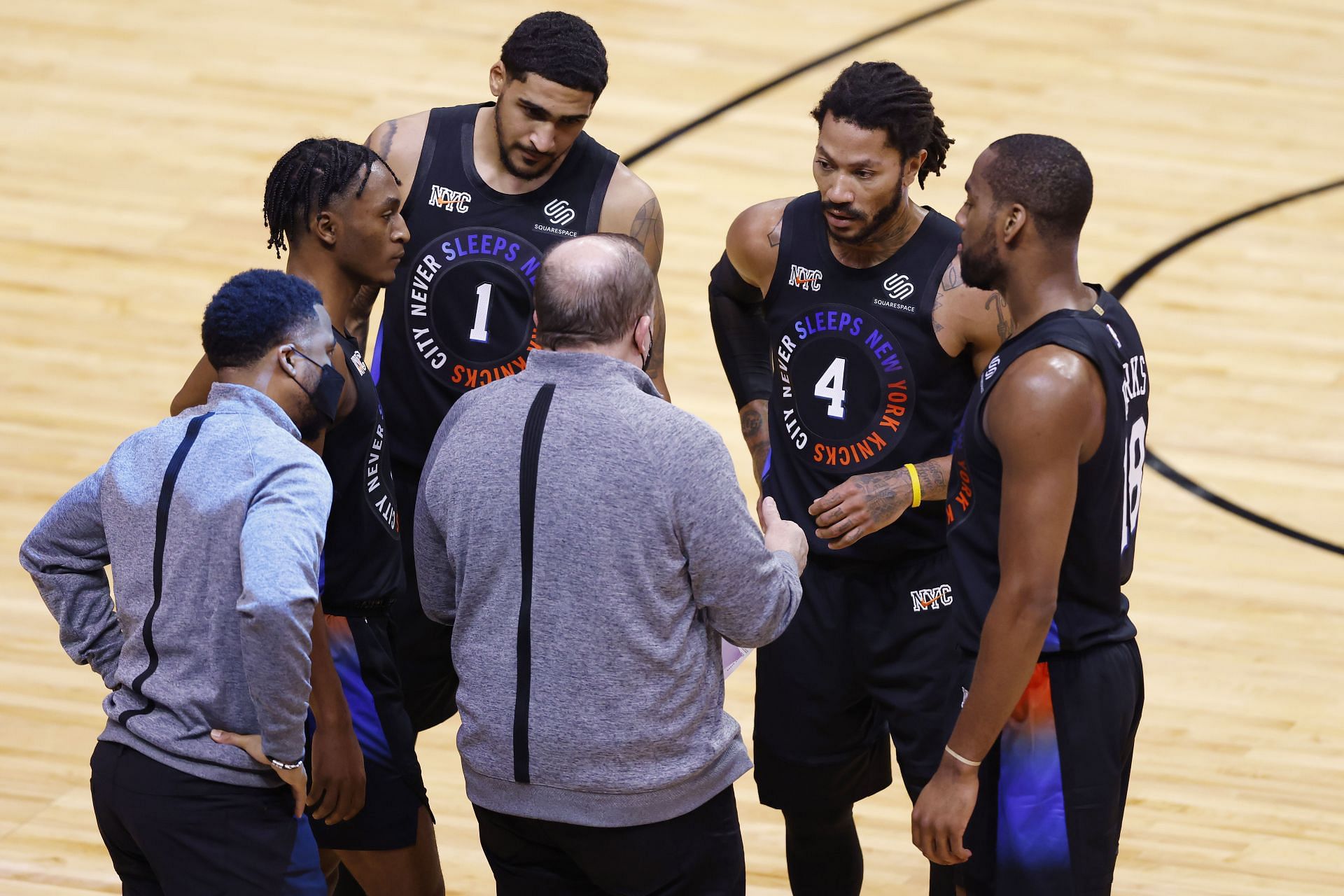 “If you look at him, it’s gonna f*** up your game” – Derrick Rose on the advice he gave to young New York Knicks players about Tom Thibodeau

Derrick Rose, the youngest MVP in the history of the NBA, probably knows more about Tom Thibodeau than anyone on the New York Knicks roster.

The coach-player duo became famous when Thibodeau was the head tactician of the Chicago Bulls and Rose won his only career MVP. They also crossed paths in Minnesota with the Timberwolves and finally at Madison Square Garden with the iconic New York Knicks franchise.

It’s not a surprise that Rose offers words of advice to young players who are probably terrified of Thibodeau’s gruff voice and no-nonsense approach.

During halftime in a game against the Detroit Pistons, Derrick Rose offered advice to his Knicks teammates, particularly those who botched defensive assignments in the first half.

Why the very sound and practical advice? Derrick Rose apparently made the same mistake the new guys were making. The 33-year-old explained:

“When I was younger I used to look over the sidelines a lot. And you feel those emotions kind of strange. After a while, I just raise my hand and put my head down. Even then he’s a winner. You can express yourself how you want to as a man.”

Derrick Rose’s advice to the young Knicks’ players before Tom Thibodeau came into tonight’s halftime huddle in the locker room?”If you look at him, it’s going to f*** up your game” 🤣

Derrick Rose’s advice to the young Knicks’ players before Tom Thibodeau came into tonight’s halftime huddle in the locker room?”If you look at him, it’s going to f*** up your game” 🤣 https://t.co/ybwz2vB4ED

Clearly, the star guard has the highest regard for his coach. Tom Thibodeau has seen the best and worst of Derrick Rose’s career, so there’s mutual admiration and respect between the two.

Rose is at a different stage of his career now but seems to be reinvigorated, with Thibodeau mapping plays and shouting instructions from the sidelines for the New York Knicks.

The acquisition of Derrick Rose and the hiring of Tom Thibodeau are two of the best deals the beleaguered New York Knicks franchise has done in years. The playoff appearance last year would likely not have happened without the two.

How will Tom Thibodeau use Derrick Rose this season with the New York Knicks?

The reigning NBA Coach of the Year will likely utilize Derrick Rose off the bench to back up Kemba Walker.

Walker’s persistent knee problems have caused him to miss numerous games in the last few years. With age and usage creeping up, those troubling knee issues are possibly going to hurt New York’s playoff push without the presence of Rose.

Some Derrick Rose highlights from game 2 last year in the playoffs. He reminded us all how talented he still is.

Some Derrick Rose highlights from game 2 last year in the playoffs. He reminded us all how talented he still is. https://t.co/jG6L8WB87a

Rose proved last season that he still has plenty left in the tank to be a vital player for the New York Knicks. He averaged 14.7 points and 4.2 assists in the regular season. Both of these averages went up when the playoffs started. He finished last year’s postseason with 19.4 points and 5.0 assists per game.

Derrick Rose’s skills, leadership and guidance in a youthful New York Knicks lineup will be essential as the team builds on the success of last season’s playoff appearance.

Denial of responsibility! NewsUpdate is an automatic aggregator around the global media. All the content are available free on Internet. We have just arranged it in one platform for educational purpose only. In each content, the hyperlink to the primary source is specified. All trademarks belong to their rightful owners, all materials to their authors. If you are the owner of the content and do not want us to publish your materials on our website, please contact us by email – [email protected]. The content will be deleted within 24 hours.
adviceBasketballbest sports newsDerrickDerrick RoseGameGavegonna