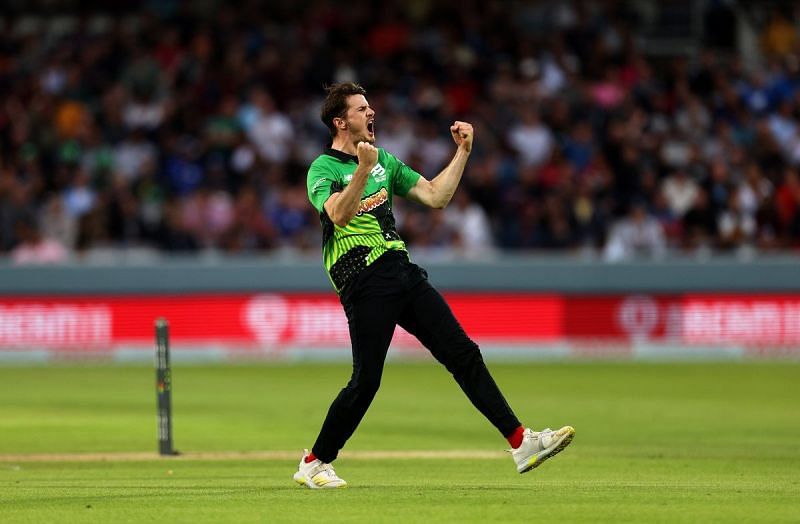 England pacer George Garton aims to carry his domestic success in England into the second leg of IPL 2021. Garton will ply his trade for the Royal Challengers Bangalore (RCB) in the UAE phase of the tournament after the franchise chose him to replace Kane Richardson.

George Garton yielded promising returns in The Hundred, helping the Southern Brave win the title. He picked up ten wickets in nine games at 23. The left-arm seamer has an impressive record in T20s as well, bagging 44 scalps at 20.06 apiece with three four-wicket hauls.

He was a part of Southern Brave’s title-winning XI at the #TheHundred.

He was a part of Southern Brave’s title-winning XI at the #TheHundred. https://t.co/16SqP39q8g

Garton said he aims for more success moving forward, including winning the T20 Blast with Sussex. The 24-year-old stated that a high-octane tournament like the IPL gives him a chance to learn from the greats of the game in a brief period.

“I am in a really good place mentally and physically and really excited for the next couple of weeks, hopefully, winning Finals Day and then the IPL. I’m expecting a lot of fun in the IPL. It’s a really strong competition. I’ll be trying to tap into everyone I can and learn as much as possible in a short amount of time.”

Garton further claimed he is aware of Virat Kohli’s exploits with the bat and is keen to pick his brain by working with him. He sees himself in Kohli, who the youngster described as a highly competitive player combined with a winning mindset.

“Virat is one of the icons of the game worldwide. I have not met him before but I have obviously watched him score a lot of runs. I am a very competitive person. I like being up front and honest and that seems exactly how he is, so I am very excited to meet him.”

While Virat Kohli has not been at his best so far in the edition, he remains a dangerous batsman. The 32-year-old is the highest run-getter in the tournament’s history, amassing 6076 runs in 199 games with five tons.

Mike Hesson gave me a call at the backend of The Hundred: George Garton

George Garton revealed getting a call from head coach Mike Hesson an offer to play for RCB. He hopes to perform well and learn from the biggest names in the T20 arena. He said:

“Mike Hesson gave me a call at the backend of The Hundred to ask if I was interested, which I obviously was. It will be brilliant to share a dressing room with him, AB de Villiers, Glenn Maxwell, Dan Christian, who is a proven T20 player around the world. They are a star-studded team and I’ll be looking to tap into their knowledge.”

RCB ended the first phase of IPL 2021 in the third spot, winning five out of seven matches. They will resume their campaign on September 20 against the Kolkata Knight Riders in Abu Dhabi. The franchise will hope their quest for a maiden title ends this year.

Loading...
Denial of responsibility! NewsUpdate is an automatic aggregator around the global media. All the content are available free on Internet. We have just arranged it in one platform for educational purpose only. In each content, the hyperlink to the primary source is specified. All trademarks belong to their rightful owners, all materials to their authors. If you are the owner of the content and do not want us to publish your materials on our website, please contact us by email – [email protected]. The content will be deleted within 24 hours.
Loading...
Bangaloresbest sports newsChallengersCricketexcitedexpectingfunGarton