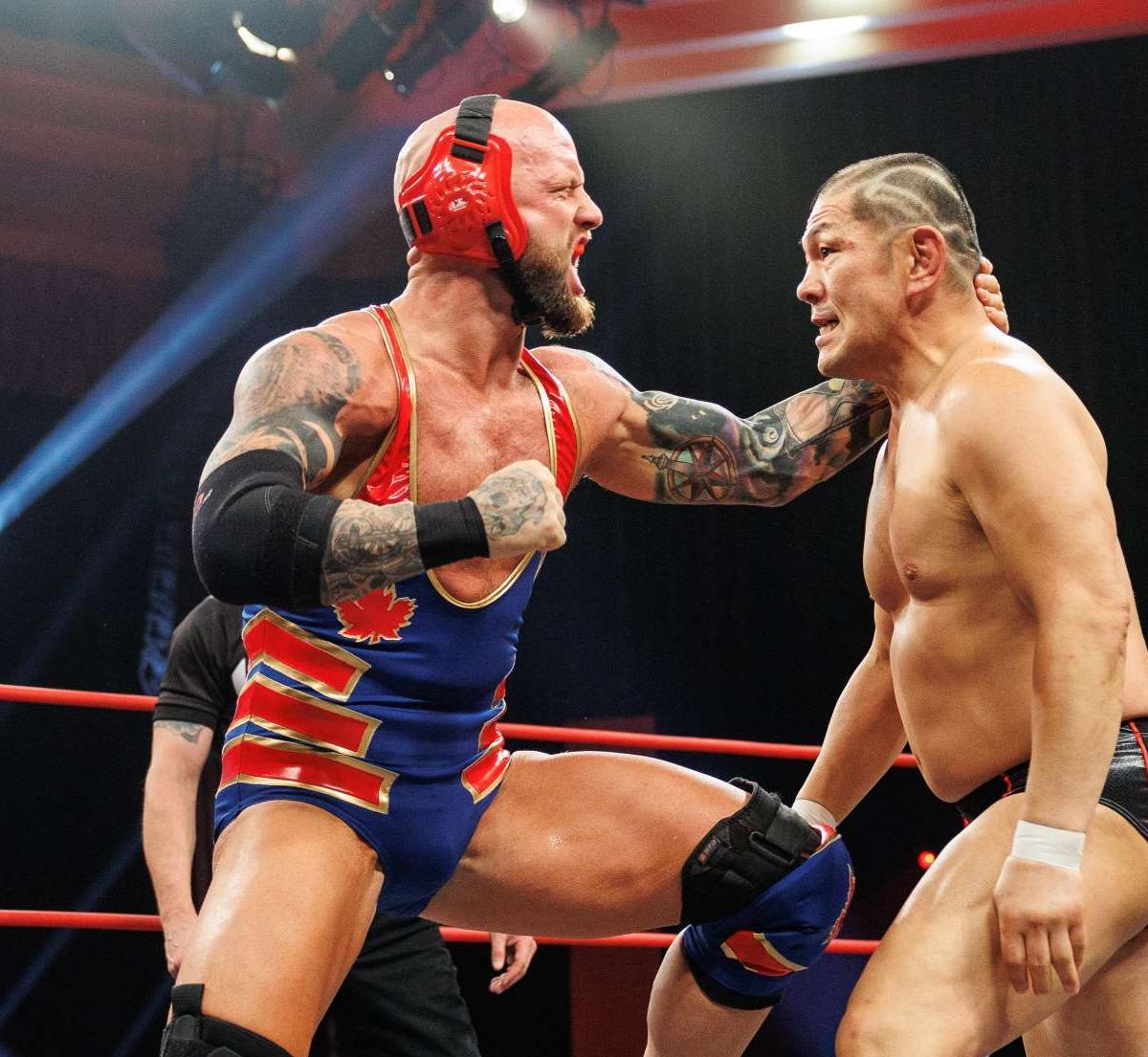 The grueling, back and forth battle headlined a show that also featured The IInspiration’s first in-ring appearance on AXS TV, a high-stakes opportunity for Steve Maclin and a preview of a Saturday’s Impact tag team title match.

Who emerged from the show with momentum on their side ahead of the live event special?

Find out with this recap of the November 18 episode.

Steve Maclin fought for his opportunity to challenge for the X-Division Championship Thursday, battling No. 1 contender Laredo Kid. A win and he would be added to the title match Saturday night at Turning Point.

Maclin exploded through the middle and bottom ropes with a tope suicida that flattened his opponent and put him in firm control of the bout. Kid finally created separation, allowing himself the opportunity to fight his way back into the match.

Despite a courageous comeback attempt, Kid fell to a driven and determined Maclin, who established himself the greatest threat to emerge with the gold Saturday.

Maclin has been a pleasant surprise in this X-Division role. No one would have suspected the former Forgotten Son would slide into that particular division and enjoy success but the feud with Trey Miguel has been a ton of fun and more importantly, has allowed Maclin to step out of his comfort zone and give fans a look at the performer that was kept hidden in developmental during his last stop.

He, Kid and Miguel are talented workers and should provide a damn fun match at Turning Point. While it may not be the more desirable singles bout between Maclin and the former Rascal, there is reason to believe it may be a legitimate show-stealer.

Backstage, Chris Sabin interrupted Gia Miller’s interview with Ace Austin and challenged The Inevitable One to a match at Turning Point. A brawl ensued, ending with Sabin trapping Madman Fulton in a freezer and fending his foe off.

The champs downed Kimber Lee, then proceeded to work her over throughout the commercial break as they wrestled control of the bout away. A tag to Lauren ignited a comeback for the face-painted Bridesmaids but a double-team maneuver allowed McKay to score the pinfall victory for her team.

After the match, Decay entered the arena and forced the champions to cower before them in fear, sending a message to the entire world that they terrify Lee and McKay.

The IInspiration defeated The Undead Bridesmaids

The match itself was fine for what it was: a showcase for the champions. For the second time in as many weeks, though, it was the Undead Bridesmaids that really stood out.

Kimber Lee and Brandi Lauren have bought into the facial expressions and body language necessary to sell the gimmick. Add in some really strong fire from Lauren during her comeback and you have an act that really started to come into its own during this round of tapings. Here’s hoping for more opportunities for the tandem in the weeks to come.

Decay basically humbling IInspiration ahead of Turning Point is a great way to put over their effect on the opposition while simultaneously telling the tale of champions who will have to overcome fear and intimidation to score the win.

Or find some sly, sneaky way to retain the titles.

Either way, it will help to enhance The IInspiration as they find their footing early in their Impact run.

Moose attacked Eddie Edwards backstage during a promo, igniting a brawl that spilled into the Impact Zone.

Looking to end his No. 1 contender before they clash Saturday on Impact Plus, Moose set up a table at ringside. Edwards fended him off and retrieved a ladder. As he set it up in the ring and teased leaping off of it and onto the Impact world champion, Edwards watched as Moose retreated.

Backstage, Scott D’Amore caught up with the champ and informed him the match with Edwards Saturday night will now be Full Metal Mayhem.

As a segment devoted to putting over the feud between Edwards and Moose, this was fine.

It told the story of their hatred for one another, introduced the weapons and gave way to D’Amore’s announcement.

It would have been nice for the company to tell some of the background between the competitors, though, especially if the commentary team is going to reference it. As it is, it planted the seeds for Saturday’s main event and a potential championship reign-defining win for the former St. Louis Ram.

The feud between Bullet Club and The Good Brothers continued Thursday night, just 48 hours from a tag title match between the teams, as Doc Gallows battled the massive Hikuleo in singles competition.

The big men went back and forth early until Hikuleo downed his opponent and worked a side headlock. Gallows fought back, though, and eventually scored the win to build momentum ahead of The Good Brothers’ upcoming title defense.

Hikuleo is still learning. He is a raw, unpolished professional wrestler who is still finding himself as a worker, let alone a brawler who can go to the ring and convincingly throw fists with Gallows. We know Doc can deliver in fights. We saw it a few months back with Joe Doering.

This just wasn’t it. The fact that both teams are heel squads did not help.

Gia Miller conducted a sit-down interview with Deonna Purrazzo, who cut a mopey promo about being there only because she was contractually obligated to be.

The most pro wrestling trio ever in Johnny Swinger, Fallah Bahh and Hernandez battled The Demon, Crazzy Steve and Black Taurus in a big six-man tag team match.

The heels proved no match for their opponents as The Demon pinned Swinger for the win.

Decay and The Demon defeated Swinger, Bahh and Hernandez

This writer loves Johnny Swinger as much as the next person but this was just…not good.

It also didn’t have time to be. The heels were steamrolled en route to victory for The Demon and Co.

Thankfully, this does not appear to be a feud that will continue beyond this round of tapings, especially as Swinger undergoes a crisis of consciousness, unsure of what to do next in the wake of another high-profile loss for him this year.

As for Purrazzo becoming a spoiled brat when faced with an obstacle, that is exactly what The Virtuosa would do. She would pout and ruin opportunities to express herself before stomping off. We got that here and the booking behind it will only serve to help her continue to generate heat moving forward.

The hotly anticipated battle between Josh Alexander and Minoru Suzuki headlined this week’s show and immediately sucked fans in with its intensity.

A brawl up the ramp gave way to Suzuki rocking the former world champion with a kick that sent Alexander tumbling down to the floor. Moments later, a mid-ring exchange of strikes ensued. Suzuki grabbed hold of his trademark sleeper, then tried to transition into the Gotch-style piledriver but The Walking Weapon countered out.

He sought the ankle lock but Suzuki escaped and reapplied the sleeper. Faced with what would have been a crushing defeat so soon after losing the Impact world title to Moose back at Bound For Glory, Alexander fought through it and delivered the C-4 spike for the pinfall victory.

This was a very, very strong wrestling match that will only further enhance Alexander’s star as he continues his journey to the top of the Impact mountain.

Suzuki has so much credibility after years of beating the hell out of people that anyone that works with him instantly feels like a big deal. Couple that with Alexander’s brief title reign and months of working to establish him as the next face of the company and you have a guy who emerged from this round of tapings as the undisputed top star of Impact.

Moose might hold the title right now but it is The Walking Weapon who shines brightest as the guy around whom the show will revolve.

Denial of responsibility! NewsUpdate is an automatic aggregator around the global media. All the content are available free on Internet. We have just arranged it in one platform for educational purpose only. In each content, the hyperlink to the primary source is specified. All trademarks belong to their rightful owners, all materials to their authors. If you are the owner of the content and do not want us to publish your materials on our website, please contact us by email – [email protected]. The content will be deleted within 24 hours.
best sports newsGradeshighlightsimpactnews update sportsnewsupdateNovemberreaction