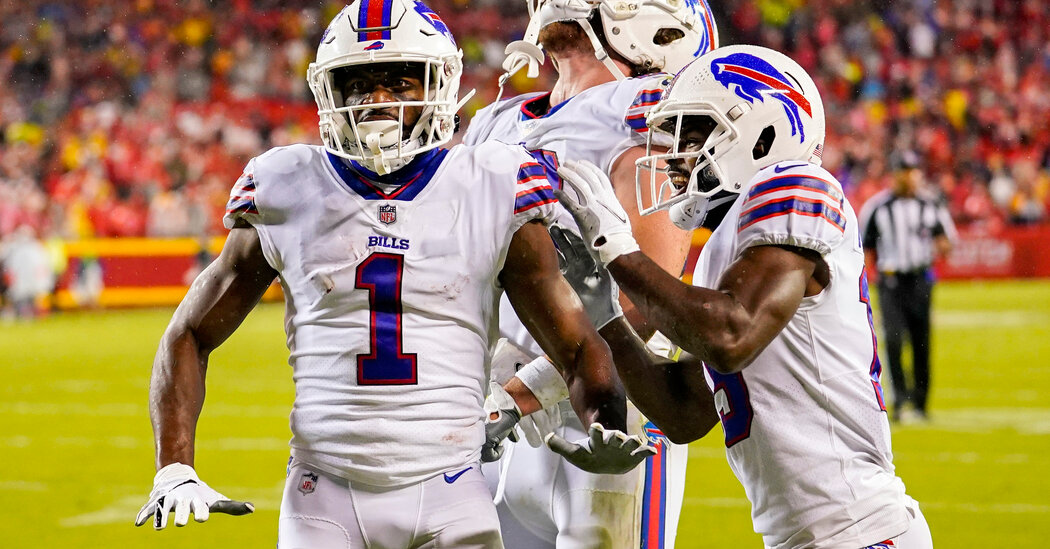 KANSAS CITY, Mo. — Before Patrick Mahomes even saw the field for the Kansas City Chiefs as their starting quarterback three years ago, he saw their future. Ignoring the organization’s portfolio of postseason fiascos, its half century of stepping on land mines, he assessed the Chiefs’ infrastructure — their inventive coaching staff, resourceful front office and nucleus of young talent — and forecast a dynasty.

Under Mahomes, the Chiefs have won the last three division titles and played in the last three A.F.C. championship games and competed in the last two Super Bowls. Whether any of those streaks will continue this season depends not so much on Mahomes but on what happens on the field after he leaves it.

The Chiefs are threatening to waste both the best offense of Mahomes’s tenure and the best season of his superlative career because they have forgotten how to cover, how to tackle and how to play defense.

The latest evidence of this season-long trend arrived Sunday night, in a 38-20 loss to the Buffalo Bills that set the Chiefs’ unofficial franchise record for most opposing receivers left open. One after another of those Buffalo receivers scooted downfield, past befuddled Chiefs linebackers and defensive backs, to await clothesline passes from quarterback Josh Allen that went for gains of 35 yards, 41, 53, 61.

The totality of a wet and weird night at Arrowhead Stadium — the game was delayed 62 minutes by severe weather, and no, the Chiefs did not use that time to hold defensive tryouts — asserted Buffalo’s supremacy in a top-heavy A.F.C. and established a few gruesome truths, none of which were encouraging for the Chiefs. One above all is particularly unsettling: The Chiefs aren’t a bad team, but they’re not a good one right now, either.

They are 2-3, in last place in a division led by a Chargers team two games clear of Kansas City — three, really, considering that Los Angeles marched into Arrowhead Stadium two weeks ago and won, claiming an early head-to-head tiebreaker. The Chiefs have the same record as those noted powerhouses Minnesota, Atlanta and Philadelphia, which last week scored 35 points against Kansas City and never punted. The only reason the Chiefs escaped with a victory was because — believe it — Philadelphia’s defense played worse than theirs.

The Bills (4-1) are infinitely better than the Eagles, and five games into the season they are better than everyone else, too. No team has scored more points than Buffalo or allowed fewer, and beyond that, according to Pro Football Reference, only five teams since the A.F.L.-N.F.L. merger in 1970 had outscored their opponents by at least 108 points through the first five weeks. The Bills padded that differential in a romp that, though it couldn’t retroactively award them the conference title they failed to capture here in January, still dealt Kansas City its worst home loss since Andy Reid took over before the 2013 season.

“There’s a certain urgency you have to have when you play for the Kansas City Chiefs knowing that everybody in this league, they want what we have,” safety Tyrann Mathieu said, adding, “Teams are chasing that, that glory, I mean, each and every week.”

Some teams are more equipped to chase that glory than others, and in Cleveland, Baltimore, Los Angeles and Buffalo the Chiefs’ early-season schedule included four of them. All approached Kansas City with a demonstrable aggressiveness, knowing they had to score to outlast Mahomes and confident they could exploit a vulnerable defense that entered Week 5 having allowed the most points and the most yards per drive in the league.

In building a 24-13 halftime lead, Buffalo averaged exactly one point per offensive play. The Bills amassed 289 yards on those 24 plays — put another way, they gained a first down every time they snapped the ball. Allen averaged 31.3 yards per completion in the half.

Even when the Chiefs’ defense stabilized in the third quarter, forcing three consecutive punts, it didn’t last. A roughing-the-passer personal foul on Frank Clark nullified an interception that would have given Kansas City, trailing by 31-20, the ball at its 41-yard line with about 12 minutes remaining. Instead, the Bills turned the second chance into a game-clinching 85-yard touchdown drive, extended by Allen’s straight-up hurdling L’Jarius Sneed on a third-and-4. The drive lasted nearly 8 minutes.

As with other elite quarterbacks, Mahomes’s greatest strength is his ability to minimize concerns and deficiencies. But the Chiefs’ imbalance is putting him in an untenable position. Heading into Sunday, Kansas City had scored the second-most points in the league despite having the fewest possessions, and what Mahomes is tasked with now — exceeding those standards, more or less — conjures the jab issued by Tom Brady’s wife, Gisele Bündchen, after New England lost the Super Bowl to the Giants in February 2012. Infuriated by several Patriots drops, she sneered that Brady can’t throw and catch at the same time.

Mahomes cannot play offense and defense for Kansas City. Let’s rephrase that: He probably could, but Reid won’t let him. Mahomes threw two interceptions — one struck Tyreek Hill in the hands and was returned by Micah Hyde for a touchdown — to run his season total to six, and appeared frustrated with receivers who didn’t adjust their routes. But on the Chiefs’ list of problems he ranks somewhere between fictitious and plain old nope. Precedent is in his favor. But not as much for a defense that, despite minimal roster turnover, has looked slow and tentative, unsure of where to go and what to do and — in the case, repeatedly, of safety Daniel Sorenson — whom to cover.

“It’s a simple game,” Mathieu said. “Cover your guy, make the tackle, inside out. And when you don’t do those things, it’s embarrassing.”

In this inaugural 17-game season, the Chiefs have an extra week to evolve and resolve, but there’s no reason for them to procrastinate. The first milepost is the trade deadline on Nov. 2, five days before Aaron Rodgers and Green Bay visit Arrowhead, and it’s rather likely that General Manager Brett Veach will be exploring deals to improve both his team’s depth and its quality, and affirm its place in the postseason.

And about that: Discombobulated as they are, it is incomprehensible to imagine a postseason without the Chiefs, especially given the expanded seven-team field this season. Also, Mahomes. But just reaching the playoffs is not what matters to, or defines them.

Mahomes initiated a paradigm shift in Kansas City, where success is measured in championships, plural. The Chiefs purged five decades of futility to win after the 2019 season, but the worst defense in the league is obscuring his vision of a red-and-gold empire.

Denial of responsibility! NewsUpdate is an automatic aggregator around the global media. All the content are available free on Internet. We have just arranged it in one platform for educational purpose only. In each content, the hyperlink to the primary source is specified. All trademarks belong to their rightful owners, all materials to their authors. If you are the owner of the content and do not want us to publish your materials on our website, please contact us by email – [email protected]. The content will be deleted within 24 hours.
best sports newsbillsChiefsencounternews update sportsnewsupdateresistancerolling

Yasmani Grandal on White Sox-Astros ALDS Game 3 controversy: ‘Wish I could tell you it was a heads-up play’

Fury: I’m the greatest heavyweight of my era