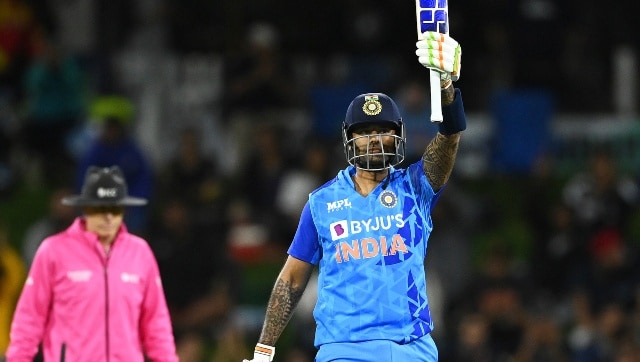 Team India batter Suryakumar Yadav, who was the third-highest run-scorer in the recently concluded T20 World Cup in Australia, continued his rich vein of form as he smashed a sensational century in the second T20I against New Zealand at the Bay Oval, Mount Maunganui to power the visitors to 191 for six.

Surya smashed an unbeaten 111 not out off 51 balls to become only the second Indian after Rohit Sharma to score two T20I centuries in a calendar year. While Rohit has achieved the feat in 2018, Suryakumar has joined the India skipper on the list this year as prior to scoring a century on Sunday, the 32-year-old batter hit a sensational 48-ball ton against England in the third T20I at Trent Bridge in July.

Interestingly, India better Virat Kohli, who is rested for the series, also took to Twitter to laud SKY for his superb show against the BlackCaps.

Numero Uno showing why he’s the best in the world. Didn’t watch it live but I’m sure this was another video game innings by him. 😂 @surya_14kumar

Also, Suryakumar’s 111 is the fourth-highest individual T20I score by an Indian batter.

Surya toyed with the bowlers to lift India to a challenging total after New Zealand put the visitors in to bat. Rain stopped play at the Bay Oval for 26 minutes but no overs were lost. While Surya was once again in a league of his own, other batters who showed intent but could not go on were opener Ishan Kishan (36 off 31) and number four Shreyas Iyer (13 of 9).

The experiment to open with Rishabh Pant did not work as he fell after a sluggish six off 13 balls. India’s powerplay approach was in focus before the game but not much was delivered on that front, with the team reaching 42 for one in six overs.

Surya came at number three in Virat Kohli’s absence and smashed boundaries and sixes at will, his last 64 runs coming off just 18 balls.

It might not look simple to the naked eye but in his own words, Surya kept it ”simple” and executed his amazing range of strokes as per the field placements.

If the spinners pitched it full on off stump, he was happy to play the inside-out shot over cover and when the faster bowlers targeted his stumps on a good length, he helped the ball sail past fine leg for a bunch of sixes. In total, Surya collected 11 fours and seven sixes.

He brought up his second century off 49 balls with an aerial drive that went wide of sweeper cover. Surya went berserk in the penultimate over bowled by Lockie Ferguson, hammering four boundaries and a phenomenal six over deep point. The fast bowler had clearly run out of ideas with Surya on a song.

The last five overs yielded 72 runs. Tim Southee bowled a brilliant 20th over and stemmed the free flow of runs by taking a hat-trick. He dismissed Washington Sundar, Deepak Hooda, and Hardik Pandya on the trot.

Denial of responsibility! NewsUpdate is an automatic aggregator around the global media. All the content are available free on Internet. We have just arranged it in one platform for educational purpose only. In each content, the hyperlink to the primary source is specified. All trademarks belong to their rightful owners, all materials to their authors. If you are the owner of the content and do not want us to publish your materials on our website, please contact us by email – [email protected]. The content will be deleted within 24 hours.
2ndachievesbest sports newscenturyfeatsINDMultiplenews update sports