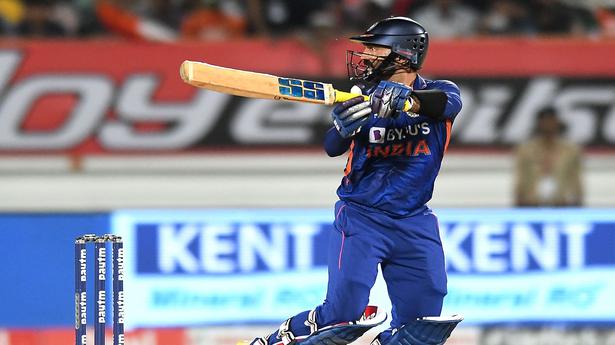 Ind vs SA | Dinesh Karthik hits in unorthodox areas, difficult to bowl to him: Keshav Maharaj

‘Dinesh Karthik has been in serious form in the role. He is certainly one of the best finishers in the game,’ said South Africa spinner Keshav Maharaj after the 4th ODI

‘Dinesh Karthik has been in serious form in the role. He is certainly one of the best finishers in the game,’ said South Africa spinner Keshav Maharaj after the 4th ODI

India batter Dinesh Karthik looks for runs in unorthodox areas and that is what makes him difficult to bowl to, feels seasoned South Africa spinner Keshav Maharaj.

Karthik’s 55 off 27 balls, his maiden fifty in the format he first played back in 2006, helped India level the five-match T20I series here on Friday.

The 37-year-old batter has made yet another India comeback with a stellar showing in the IPL.

A designated finisher in the Indian team, Karthik has not relied on power hitting to be effective. He has played the field brilliantly to get the desired results.

On Friday, he swept the spinners and pacers with equal disdain besides pulling off audacious reverse hits.

“He (Karthik) has been in serious form in the role he is fulfilling. He is certainly one of the best finishers in the game. He scores in unorthodox areas which makes him difficult to bowl to. We saw why he was one of the leading performers in the IPL. He showed his class today and played exceptionally well,” said Maharaj after the game.

Momentum with India against SA

India have won two in a row after South Africa outplayed the hosts in the first two matches. Going into the decider in Bengaluru on Sunday, the momentum is with India. Maharaj said the team is looking forward to the challenge.

“We had a bit of momentum in the first two and India got in the next two. It makes that much more exciting to go to Bangalore, the crowds have been amazing so far, it will add to the excitement.

“Also it is a good test for our cricket team to see how far we have come to play in events like these and try and clinch the series against a strong Indian outfit.” He also praised India pacer Avesh Khan who took four wickets for 18 runs.

“Avesh adapted really well and kept it really simple and got the reward for consistent and controlled bowling,” Maharaj added.

Denial of responsibility! NewsUpdate is an automatic aggregator around the global media. All the content are available free on Internet. We have just arranged it in one platform for educational purpose only. In each content, the hyperlink to the primary source is specified. All trademarks belong to their rightful owners, all materials to their authors. If you are the owner of the content and do not want us to publish your materials on our website, please contact us by email – [email protected]. The content will be deleted within 24 hours.
Areasbest sports newsBowlcricket newsDifficultDineshdinesh karthikdinesh karthik 50 vs sa

Even after tragedy, Ebersol family a powerful example of how father-son bond never fades