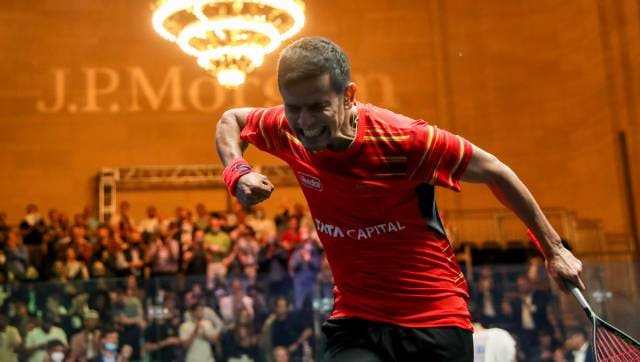 India at CWG 2022: Saurav Ghosal relies on ‘one game at a time’ mantra for success in Birmingham-Sports News , Firstpost

World No.15 Saurav Ghosal, who is going through a purple patch in his career with a singles title in the Malaysian Open last year followed by an impressive semi-final appearance at the Tournament of Champions in England in 2022, speaks of his preparations ahead of CWG 2022.

Kolkata: Indian squash team has grown from strength to strength at the Commonwealth Games over the last decade as the side notched a gold and two silver medals in the last two editions of the quadrennial event. It is regarded as a strong return given Indian squash team made its first appearance at the event in 2010 Delhi CWG.

It was 2014 Glasgow that turned out to be the breakout year for the Indians in the discipline as a young pair of Dipika Pallikal and Joshna Chinappa claimed the women’s doubles gold medal while Saurav Ghosal missed out on a bronze medal while finishing fourth. The trio made India proud again at the 2018 Gold Coast as they bagged the women’s and mixed doubles silver with Deepika having her name on both the medals.

The 2022 Birmingham CWG now looks like their strongest claim for turning the silver into gold as the experienced trio return to the event as World mixed and women’s doubles champions.

Current World No.15 Ghosal, who is going through a purple patch in his career with a singles title in the Malaysian Open last year followed by an impressive semi-final appearance at the Tournament of Champions in England in 2022, spoke to Firstpost ahead of the CWG and gave us a peek into his never-ending hunger for more success.

At 35, you have been in strong form over the last year which saw you end your three-year singles title drought. You also reached the semis of the Tournament of Champions in England followed by the World Mixed double title. Do you think you have reached Birmingham in the best of shape?

SG: I think the last 12 months have gone pretty well. I have been playing at a very high level. I had a bit of a setback in March with an adductor injury, which pushed me back a little bit. But I was able to recuperate pretty well and after that reaching the semi-finals of the Tournament of Champions and winning the mixed doubles world title was pretty decent. I also had a very good block of training over the last six-seven weeks which puts me in a good place. Hopefully, I can put everything together and execute at the Commonwealth with some good performances over the next couple of weeks.

Speaking more of the singles, the 2018 edition didn’t go according to plan after the highs of 2014 when you came close to winning the gold medal. Do you think that will affect you this time?

SG: Last time wasn’t great as I had to make an early exit (second round exit to Jamaica’s Christopher Binnie). It was a huge setback. But that’s how the sport is, things don’t go sometimes the way you want them to. But I was happy with the way I reacted after that by winning (silver in) the mixed doubles with Dipika. Obviously, this is a new opportunity four years down the line and I want to make the most out of it and I feel I am capable of doing that in the running for the gold medal. I am not someone who looks sad while the process is going on whether it’s the redemption or not.

Any change in approach this time around in singles to go the distance?

SG: Actually, the approach is similar to that of any other tournament but obviously, Commonwealth Games is a different beast so to say. I will be trying to take it one day at a time. It’s kind of easy to look too much ahead and fall into a trap, which I feel I did at the last Commonwealth. The singles didn’t go according to the plan, so it’s important I focus on one round and the opponent in front of me at a time and get through the draw as finically as I possibly can and put myself in contention for the medal rounds.

2020 was a difficult time for squash players in India as restarting the game became difficult with the game being played inside a closed space. Also, squash not being part of the Olympic roster means there was never really a rush to resume it. It surely takes time away from a player like you who’s on the wrong side of the 30s, but you seem to have reacted well.

SG: I feel I have always been one of those people who only try to control things he can. I try not to worry and stress about things that are not in my control and that’s how I live my life as well. It obviously wasn’t easy but you have to make the best of situations. Thankfully things have fallen into place a little bit which is great and hopefully, I can keep that growing.

Speaking of your doubles partnership with Dipika, that is exciting many fans as you both are reigning mixed doubles World champions. Is CWG an unfinished business for both of you as you had to settle for the silver medal?

SG: Dipika and I are a very strong pair. Both of us play a brand of squash that is entertaining and at the same time very effective. We enjoy playing together and we have a lot in our armoury to dip into and react accordingly in match situations. We know and believe that we have it in us to win the gold.

Again, when it comes down to execution, we have the right thing to be mentally really strong; to be perseverant on the things we want to achieve. We both want to turn that gold medal into reality and we are focusing on that and we are working on being consistent enough over the longer period to achieve that.

But don’t you think being the reigning champions, there is a target on your back now, especially with the English pair of Alison Waters and Adrian Waller also in the mix, whom you defeated to the title?

SG: I don’t think we are an out-and-out favourite. Of course, we are among the favourites and I think that’s a privilege. But that won’t be achieved if we continue to play the high level of squash we both played together this season. We both know if we get going, it will be difficult to stop us and we want to get there as quickly as possible, which requires a lot of hard work, especially with the brand of entertaining squash we both play.

India’s squash situation is somewhat similar to that in tennis. We have achieved some great feats in doubles but major singles titles are not there yet. What is it that makes Indian squash doubles teams so formidable?

SG: I am not so sure, to be honest. I feel we have done decently well in the singles over the last few years but obviously, with us being the doubles and mixed doubles reigning champions, we are yet to manage that feat in singles as well. I am hopeful that we will achieve that in the singles very soon. Still, I honestly don’t know what has worked for us in the doubles.

I can say for Deepika and me, from both the flanks we are very dangerous to our opponents. We understand how each of us needs to be protected with the patterns of play we need to work with and we execute that effectively and consistently, which I believe is our secret for us to win.

To think of it, every country has its distinctive way of playing squash with Egypt as the leader of the game. Do you think that culture is in India now with the game gaining popularity slowly?

SG: It’s true, in squash every major country has their own identity. The Egyptians, Australians and even the Indians have a certain identity to their game and which is good. The more you can adapt to that identity the more difficult and unpredictable you become for your opponent. It becomes harder for your opponent to break you down and take you away from that identity. I think it’s really something to be proud of that India already has developed some sort of identity and culture where people can look at us and say they are going to play a brand of squash that is entertaining and exciting to watch.

The current CWG squad also had a surprise inclusion as the youngest member in 14-year-old Anahat Singh, who was selected after strong performances at the trials. How interesting is her presence in the team for you all?

SG: I think it’s great, she has a lot of potential and has done really well to get into the team. She has talent in abundance and is mentally and physically very strong. I have seen that hunger in her to learn and succeed. It’s important that everyone around her, including the federation and the media, should understand that she is just 14 and need to be nurtured well.

We can’t burden her with the expectations of a medal and let her grow. She has the tool in place to challenge at the top in the future and hopefully, she achieves that. I wish her all the best in achieving that and want to do my bit in helping her while she is with me in the team. This is her first Commonwealth Games, in fact, her first senior representation as well. I hope she enjoys the time and experience she gets here and being with all of us gives her the experience to grow. And watching the top players from around the world should give her the impetus to grow.

Denial of responsibility! NewsUpdate is an automatic aggregator around the global media. All the content are available free on Internet. We have just arranged it in one platform for educational purpose only. In each content, the hyperlink to the primary source is specified. All trademarks belong to their rightful owners, all materials to their authors. If you are the owner of the content and do not want us to publish your materials on our website, please contact us by email – [email protected]. The content will be deleted within 24 hours.
best sports newsBirminghamSportsCWGFirstpostGameGhosalIndiamantra