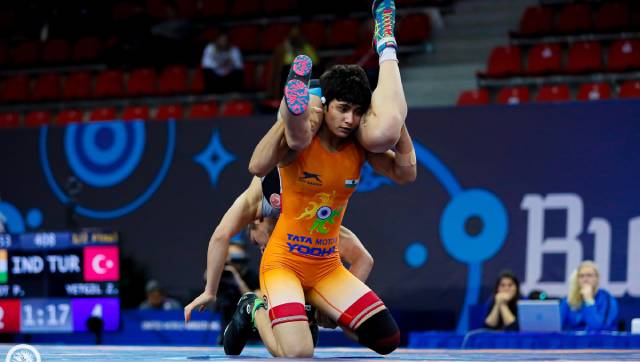 Pooja Gehlot is all set to make her Commonwealth Games debut in the 50kg category.

Kolkata: Pooja Gehlot was living her last year’s nightmare again when a hairline ankle fracture with one and a half months to go for the Commonwealth Games 2022 trials dampened her preparations. Around this time last year, her Olympic dreams ended at the National trials with a narrow defeat to Seema Bisla, a dominant figure in the 50kg category.

The loss hurt her more because it came after her attempts to return to the mat after elbow surgery. That’s why the 25-year-old wrestler was willing to stretch her limits this time around.

“Mujhe Olympics ke baad, Commonwealth Games nahi miss karna tha ( I didn’t want to miss CWG like Olympics),” Pooja tells Firstpost. “That’s why I took the risk of cutting my plaster a week before and got into the mat to prepare for the trials. I thought I will ensure I don’t put too much pressure on my ankle and can train.”

Her desperation was somehow explicable for a wrestler, who was regarded as a future star after her exploits at the junior level but was yet to make her debut at a major event due to a string of injuries.

“There are three important tournaments for us wrestlers, Olympics, Asian Games, and Commonwealth Games. And I was missing all of them. I had a shoulder injury in 2019 and then an elbow injury during the U23 World Championships final bout (she ultimately settled for silver) hindering my progress on turning senior category wrestler,” says Pooja, who won 2021 Senior Nationals in the 53kg category after recuperating from the shoulder pain.

Odds were against the former junior U17 Asian champion as well with Asian bronze medallist Seema, U23 World Championship runner-up Shivani Pawar and Jyoti also competing for the spot. The girl from Panipat, however, emerged triumphant from the category to seal her Birmingham ticket.

Her coach Mandeep, who also trained Sakshi Malik to the 2016 Olympic bronze medal, believes it was Pooja’s never-say-die attitude that often made her do the impossible.

“Pooja bachpan se hi ziddi hai (She is stubborn since childhood),” says Mandeep, who works for the Haryana Sports Department in Rohtak. “Her family was against her wishes to do wrestling but she eventually convinced them all to let her pursue her dreams. That’s why we took the risk, knowing she will cope with it.”

Pooja’s wrestling career started late at the age of 17 when she joined an akhada in Narela in 2014; leaving behind her spot in the Delhi women’s volleyball team. This came against her family’s wishes as it was a cultural shock for them to imagine her girl do wrestling.

“I was suggested many times at the akhada that I should think of trying other sports instead of wrestling. My family and coaches at the training centre thought wrestling is not a sport for girls and that it will hurt me a lot. But I was clear in my head about wrestling. Still at the akhada, boys were not often willing to train with a girl,” recalls Pooja.

The wrestler’s hunger to improve and train with girls eventually led her to Mandeep, who now trains her since 2017 at Rohtak’s Chotu Ram Stadium. It was Pooja’s aggressive style that convinced Mandeep of her wrestling ability.

“She is faster than her rivals in her weight category, where wrestlers are mostly quick. Pooja stood out with her attacking wrestling as she attacks with the same intensity throughout the six minutes and often forces her rivals into making mistakes,” feels Mandeep.

However, Pooja’s progress was soon halted by a number of injuries that started with a shoulder injury during the 2019 Senior Nationals.

“Kuch zyada hi chotein khai hain (Got injured too many times). I want to say good things about my career but injuries have kept me away from the mat for too long,” says Pooja. “To say the truth, after Olympic miss I somewhere doubted myself but gave myself another chance at the Senior nationals after Olympics. Winning the gold (in 53 kg) there was crucial as it restored my faith in my wrestling.”

After winning a tough field at the trials, Pooja is among automatic favourites for gold medal at the CWG with India’s years of dominance in the discipline at the event. However, her lack of major tournament experience at the senior level is still a worry.

Her only international experience at the senior level is Bolat Turlykhanov Cup last June, where Pooja made an opening round exit with her ankle pain resurfacing.

Mandeep, however, feels that a medal at the CWG is within her disciple’s grab. “Winning the trials itself was quite a tough battle. Historically, those who perform well at the CWG trials, often go on to win medals as well. Pooja is a talent in the waiting, she will make India proud for sure,” says the coach.

For Pooja the goal is clear: “I have waited too long for my first senior medal. I won’t let it slip easy. I am not afraid of the competition, I know I am going to play my natural game.”

Denial of responsibility! NewsUpdate is an automatic aggregator around the global media. All the content are available free on Internet. We have just arranged it in one platform for educational purpose only. In each content, the hyperlink to the primary source is specified. All trademarks belong to their rightful owners, all materials to their authors. If you are the owner of the content and do not want us to publish your materials on our website, please contact us by email – [email protected]. The content will be deleted within 24 hours.
behindSportsbest sports newsCWGFirstpostgehlotIndiainjurystrickenLeave