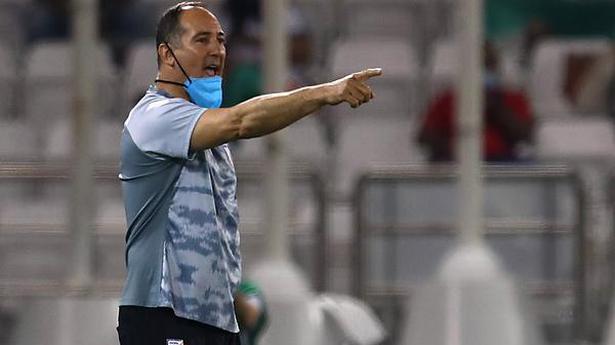 The senior men’s National football team has found a strong spine of technically competent players, and is now ready for the next level of competitiveness, feels head coach Igor Stimac, following India’s triumphant outing in the recent SAFF Championship.

“We can now say that for each position we have three players with similar qualities. We are now in the position to go one step forward, which is playing good football in the third round of Asian Cup qualifiers (in February) and ensuring a berth in the final stage of the qualifying process,” Stimac said at a media conference on Tuesday.

“Now, after two and half years of development process, we can say that we could create a spine for the team with players who have the right technical knowledge and ability,” he added.

Remarking on the way India preserved its dominant status in the South Asian region, Stimac said the team showed good physical and mental attributes that speak a lot about its merit. “What impressed me most were the qualities like togetherness, energy, positive attitude and great mindset of the team.

“We had very little time to prepare with players coming from the off-season period. Despite these difficulties, the lads managed to fight together and showed amazing positivity and energy,” Stimac said.

When asked to comment about the fact that — despite having many talented youngsters — the best player of the team (captain Sunil Chhetri) is 37-years-old, Stimac said: “I never look at the age of the players. If I looked at age then I would not have allowed the 18-year-olds in the side,” he said.

Denial of responsibility! NewsUpdate is an automatic aggregator around the global media. All the content are available free on Internet. We have just arranged it in one platform for educational purpose only. In each content, the hyperlink to the primary source is specified. All trademarks belong to their rightful owners, all materials to their authors. If you are the owner of the content and do not want us to publish your materials on our website, please contact us by email – [email protected]. The content will be deleted within 24 hours.
best sports newsCoachcompetentfootball fixturesfootball newsfootball resultsigor stimacIndia

Pixel 6 and 6 Pro: Google Says It’s Serious About Smartphones. For Real This Time.

Australian Open: ‘Reaching the second round of grand…

The newest Intel CPUs give 4K Blu-rays a 1080p downgrade