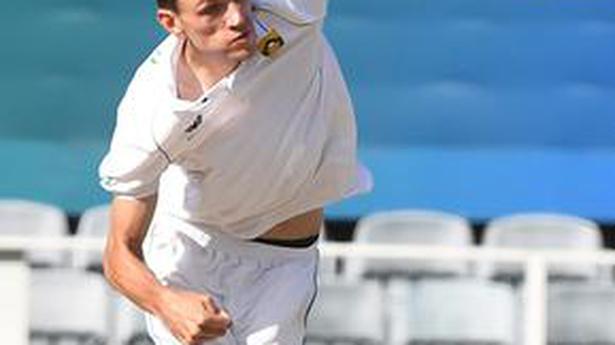 Despite problems on several fronts, the Proteas continue to churn out exceptional pacemen. The assembly line never dries out.

Paradoxically, had Nortje been fit for the series, we might have not seen Jansen at all. In fact, had Duanne Olivier not suffered from Covid after-effects, Jansen would not have made his Test debut at Centurion.

The talent in the left-armer was recognised early. He was among those who bowled at the Indians in the nets during the 2018 tour.

His bowling left Virat Kohli impressed. He bowled at the Royal Challengers Bangalore nets but was eventually bought by the Mumbai Indians.

Jansen makes great use of his height with a high-arm action. He has a lovely side-on release, bowls from close to the stumps and brings with him the left-armer’s angle.

He generates good pace, achieves natural bounce, has an effective short ball and moves the sphere. He is a potent package.

Importantly, he can bring the ball into the right hander from over the wicket and take it away from the left-hander.

In fact, Jansen reminds one of Bruce Reid, the tall Australian left-armer who bowled in the 80s and early 90s. He picked up 113 wickets in just 27 Tests.

Jansen came into his own in the second innings at Centurion. He pitched the ball up and moved it away from Kohli who perished to a cover-drive.

Jansen finished with four for 55. Skipper Dean Elgar called him the “Player-of-the-match for us”.

He caught the eye at the Wanderers too. K.L. Rahul had just reached 50 when Jansen scalped him on the pull. Hooking, pulling or slashing Jansen is hazardous since the ball comes at varying heights.

And he took out Mayank Agarwal on the drive, angling the ball across the right-hander and pitching it up.

The free-stroking R. Ashwin fell to a slash off a short ball — once again it was a case of varying bounce — and Jansen dismissed Rishabh Pant with a delivery that came in with the angle and held its line on the left-hander’s off-stump.

And he bowled close to Rahul’s off-stump to have the key batsman held in the cordon in the second innings.

Jansen is versatile, can bowl from round the wicket too but needs to work on control.

South Africa does not have a great history of left-arm quicks. Brett Shultz was fast but fitness concerns terminated his career.

Jansen, who needs to put a lid on his temper, could lend the Proteas attack variety and thrust.

Denial of responsibility! NewsUpdate is an automatic aggregator around the global media. All the content are available free on Internet. We have just arranged it in one platform for educational purpose only. In each content, the hyperlink to the primary source is specified. All trademarks belong to their rightful owners, all materials to their authors. If you are the owner of the content and do not want us to publish your materials on our website, please contact us by email – [email protected]. The content will be deleted within 24 hours.
best sports newscricket commentarycricket updatesgrabsIndiaJansenlatest cricket newsMarco

Warriors’ Klay Thompson Announces He Will Return from Achilles Injury vs. Cavaliers