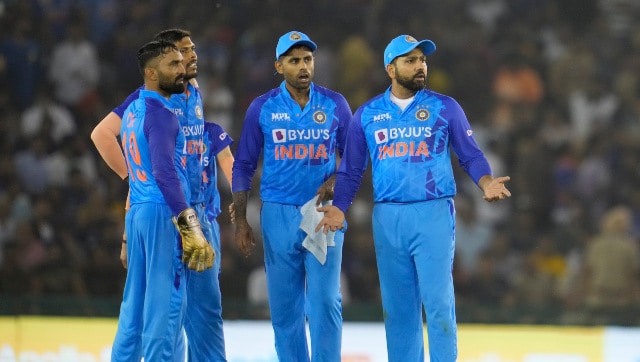 India vs Australia: Men in Blue’s listless bowling at death and other talking points from 1st T20I – Firstcricket News, Firstpost

It was a familiar tale of woe for the Indian bowling unit on Tuesday as they failed to defend a formidable total in excess of 200, suffering a four-wicket loss against Australia in the opening T20I in Mohali.

It was poor performance in the bowling department that was the primary reason behind their defeats against Pakistan and Sri Lanka in the Asia Cup. The same was true of the Men in Blue in the series opener against the defending T20 world champions at the IS Bindra PCA Stadium, where Australia ended up chasing the 209-run target down with four balls to spare, grabbing a 1-0 lead in the three-match series.

The ongoing series against Australia along with South Africa’s upcoming tour of India are meant to serve as a dress rehearsal for the Indians in their preparation for the T20 World Cup that takes place Down Under starting next month. And with the kind of performance dished out on Tuesday, there still is a plenty for skipper Rohit Sharma and coach Rahul Dravid to ponder over.

Here we take a look at five talking points from the opening T20I:

While Jasprit Bumrah’s inclusion in the squad was a major boost to the Indians, the star pacer wasn’t included in the opening T20I, meaning Bhuvneshwar Kumar, Umesh Yadav and Harshal Patel had to share the seam-bowling duties with assistance from Hardik Pandya. And Bumrah’s death-bowling skills were once again sorely missed by the Men in Blue as the pair of Matthew Wade and Tim David virtually killed the contest by collecting 53 runs between the 17th and 19th overs, bringing the equation down from 55 off 24 to 2 off 6.

Bhuvneshwar had entered this series on the back of two horrid penultimate overs bowled against Pakistan and Sri Lanka in the Super 4s of the Asia Cup and his confident took an even bigger hit after conceding 31 of the 53 runs mentioned above, finishing with disastrous figures of 4-0-52-0.

Pandya’s form both with bat and ball had taken a hit after a match-winning all-round display in the opening game of the Asia Cup against Pakistan. The Gujarat Titans captain however, bounced back to form in style before anyone could begin to doubt his place in the middle-order.

Pandya walked in at a time when the pair of KL Rahul and Suryakumar Yadav had done a fine rebuilding job after a shaky start to the innings. And the manner in which he took the Aussie attack to the cleaners, smashing seven fours and five sixes, was a sign of the all-rounder back at his destructive best with the bat in hand. Pandya ended the innings on a flourish, smashing a hat-trick of sixes off Cameron Green in the last three balls, ensuring India posted a formidable total on the board.

Green a fine backup to Warner

Australia are missing several first-team players in this series, including opener David Warner, and Josh Inglis was seen among the options the visiting team had for partnering captain Aaron Finch at the start of the innings.

For a change, however, all-rounder Cameron Green walked out at the start of the chase — for the first time in his international career at that. And he took to the job of batting in the powerplay like duck to water. While Finch, who had registered seven single-digit scores in his last eight outings, couldn’t quite convert a promising start into a bigger score, it was Cameron Green’s fireworks that gave the visitors the start that they needed to successfully chase down a target of this size. His 30-ball 61 was laced with eight fours and four sixes and the Western Australian struck at over 200, giving the team management a solid back-up to Warner.

Speaking of back-ups, how good was Axar Patel in the series opener! At a time when India are sweating over Ravindra Jadeja’s absence due to injury, not just from their home assignments but in the upcoming World Cup as well, his like-for-like replacement delivered a performance with the ball gave the team management something to smile about and was a big positive in an otherwise insipid bowling display.

Axar finished with a fine haul of 3/17 from four overs, the kind of performance that wins you matches more often than not and would’ve seen India through to a victory had it not been for the brainfade in the death overs. Among his wickets was top-scorer Green, who departure in the 11th over began a mid-innings revival of sorts for the Men in Blue.

One of the key talking points heading into India’s home fixtures against Australia and South Africa was the debate over Rohit Sharma’s opening partner, especially after Virat Kohli’s brilliant hundred against Afghanistan at the top of the order in their final Asia Cup outing.

On a day when both Rohit and Virat — the first-choice opening pair according to some — were sent back to the hut early, it was Rahul who stood up for the hosts with his 35-ball 55 that comprised four fours and three sixes. The Lucknow Super Giants captain led India’s revival after the shaky start in the powerplay, forging a 68-run third-wicket stand with SKY. And it’s not just runs, his strike rate of 157.14 should also shut the critics up for a while.

Denial of responsibility! NewsUpdate is an automatic aggregator around the global media. All the content are available free on Internet. We have just arranged it in one platform for educational purpose only. In each content, the hyperlink to the primary source is specified. All trademarks belong to their rightful owners, all materials to their authors. If you are the owner of the content and do not want us to publish your materials on our website, please contact us by email – [email protected]. The content will be deleted within 24 hours.
1staustraliabest sports newsBluesbowlingdeathFirstcricketFirstpost