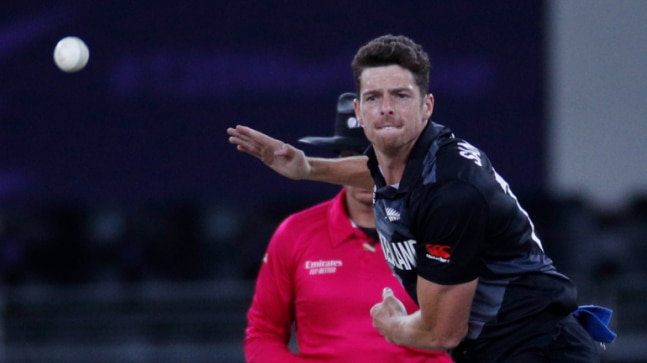 India vs New Zealand: Our spinners are eager to see some friendly wickets, says Mitchell Santner

New Zealand spinners are looking forward to bowling in conditions that will be friendly to their trade, spin-bowling all-rounder Mitchell Santner has said.

After resting some key players during their three-match T20I series, the World Test champions are now gearing up to take on the runners-up in their own backyard in a wo-Test series, beginning November 25. New Zealand have never won a Test series in India and have managed just two draws.

“Hopefully the boys are ready for the first Test in Kanpur. It’s a quick turnaround again. We have some good spinners, we know spin will play a big part. It’s about just trying to grind out as much as possible,” Santner said at a virtual media interaction on Sunday night.

“We’ve seen how good (Ravichandran) Ashwin, (Ravindra) Jadeja and Axar Patel can be in these conditions. We’ve got guys like Ajaz (Patel) and (Willliam) Somerville who are pretty eager to see some spinning wickets.”

Santner is well aware of the tough challenges in India as he was quick to recall their 2016-17 tour when they suffered a 0-3 thrashing in Tests beginning with the Kanpur Test. They later went on to lose a five-match ODI series 2-3.

“It doesn’t matter what format you come up against India, they’re a tough challenge to beat. We saw that in 2016.” Santner stood in as captain in the third and final T20 of the series here at Eden Gardens on Sunday as they were bowled out for 111 in their chase of 185.

“It’s been a quick turnaround from the World Cup. But we pride ourselves on turning up and play some good cricket against a very good Indian side and win a series.

“It’s tough to do and they showed once again that it’s a tough challenge to come to India and play a really good side. We were good in patches.”

Opting to bat, Rohit Sharma struck 56 off 31 balls, his third successive half-century. He was adjudged man-of-the-series for being the top run-getter. His vice-captain and opening partner KL Rahul also scored a half-century as the duo put up a century-plus stand in the second T20. Rahul was rested for the final match.

“The challenge for us was to get wickets at the top and we couldn’t throughout the series. But credit the way Rohit and KL batted at the top.

“We had our chances, but the conditions changed in every game and dew played a major factor. And then again tonight (Sunday), it was there, but it didn’t get any worse. “We were outdone this series but we’re looking forward to the 12 months towards the next World Cup,” he signed off.

Denial of responsibility! NewsUpdate is an automatic aggregator around the global media. All the content are available free on Internet. We have just arranged it in one platform for educational purpose only. In each content, the hyperlink to the primary source is specified. All trademarks belong to their rightful owners, all materials to their authors. If you are the owner of the content and do not want us to publish your materials on our website, please contact us by email – [email protected]. The content will be deleted within 24 hours.
best sports newseagerfriendlyIndiaMitchellnews update sportsnewsupdateSantner