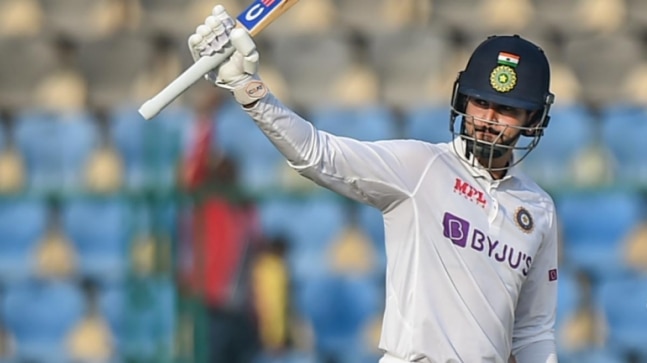 Shreyas Iyer was pumped up before the big day as he took to social media to recall his journey from the time he suffered a major shoulder injury earlier this year. At the end of the short clip, Shreyas Iyer was flaunting his India whites in his hotel room, brimming with joy.

A Test debut is one of the most memorable moments for any cricketer and for 26-year-old Shreyas Iyer who has faced several ups and downs, the big day was even sweeter. Iyer was scoring tons and tons of runs as early as 2015 season when he was a 21-year-old youngster in Mumbai cricket circles, scoring a mammoth tally of 1321 runs in Ranji Trophy. Iyer never stopped doing what he knows the best — scoring runs. His first-class average before his Test debut was a healthy 52.

Many felt Iyer’s Test debut should have come earlier but it’s better late than never. In a year when Iyer had battled quite a few tough on-field moments, Iyer was in prime form at the start of the year but he missed close to 6 months of competitive action after suffering the shoulder injury during a home series against England. He had led Delhi Capitals to their first-ever Indian Premier League final but he had to sit out during IPL 2021, which was suspended in May due to the Covid-19 pandemic. When he returned from the injury setback, Iyer was no longer the captain of his franchise.

The injury also meant Iyer lost out on valuable time in the lead up to the T20 World Cup. He was not part of the 15-man squad at the World Cup.

However, the 26-year-old was rewarded for his performances when he was picked in India’s T20I as well as Test squad for the home series against New Zealand. Not many would have had Iyer in their starting XI fo the Kanpur Test but an injury to KL Rahul days ahead of the series opener meant Iyer was slotted in the middle-order.

The big day was here and Iyer got his maiden Test cap from the man whom most of India, let alone Mumbai cricketers idolize – Sunil Gavaskar. What started as a fine day for Iyer turned out to be the most memorable day in his nascent international career as Iyer rescued India from a precarious position on Day 1 of the Kanpur Test against New Zealand.

Incidentally, Iyer had emerged as a Mumbai batting star at the same venue 7 years ago. In a make-or-break situation for the then 19-year-old, Iyer, fired up by then Mumbai coach Pravin Amre, rescued his state team from a tough spot on a green track against Uttar Pradesh in a Ranji Trophy fixture. Mumbai were reeling at 56/5, trailing UP’s first innings total of 206 by 150 runs. Iyer walked in, blasted a quickfire 75 to help Mumbai take the lead.

The fighting spirit was visible on Thursday too as Iyer was in his elements as soon as he settled into his innings on a slow pitch, this time, in Kanpur. Iyer walked in after India had lost two set batsmen — Shubman Gill (52), Cheteshwar Pujara (26) — right after Lunch.

Kyle Jamieson and Tim Southee had their tails up but Iyer weathered the storm while batting with his captain Ajinkya Rahane. However, skipper Rahane departed for 35, leaving the team in a spot of bother.

But Iyer hung on, forging a partnership with No. 6 Ravindra Jadeja. The Mumbai batter started to stamp his authority over the New Zealand bowlers. And as the day progressed, Iyer grew in confidence. He was hitting boundaries against the spinners at will and played the pacers with respect.

FIFTY!@ShreyasIyer15 brings up his maiden Test 50 on his debut game

Iyer showcased that he has one of the sharpest minds going around when he took on the spinners towards the close of play after the umpires had deemed the light not good enough for New Zealand to operate with spin. Iyer and Jadeja put on a hundred-plus stand to put India in a position of strength.

Iyer had become the 30th India batter to hit a fifty on Test debut. Iyer was unbeaten on 75, having hit 2 sixes and 7 boundaries. On Friday, Iyer will be hoping to complete the magical 3-figure score and join an elite list of batters, some of whom went on to become big names in Indian cricket.

7 years after he told the world he was good enough to be a Mumbai batter, Iyer proved he is ready for the big business. He will not forget Green Park for the rest of his career.

Denial of responsibility! NewsUpdate is an automatic aggregator around the global media. All the content are available free on Internet. We have just arranged it in one platform for educational purpose only. In each content, the hyperlink to the primary source is specified. All trademarks belong to their rightful owners, all materials to their authors. If you are the owner of the content and do not want us to publish your materials on our website, please contact us by email – [email protected]. The content will be deleted within 24 hours.
best sports newsdebutIndiaIyermerrynews update sportsnewsupdatepulls

JioPhone Next Goes on Sale via Reliance Digital, No Registration Required

Amid Nayib Bukele’s Bitcoin Hype, Not All Salvadorans ‘Feel the Bit’