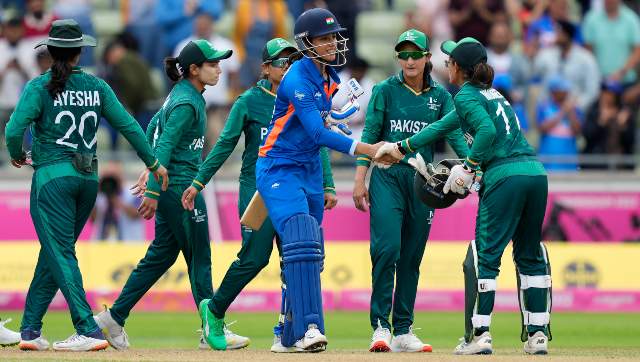 India vs Pakistan, CWG 2022: A big win for India, as much as relief as revelry – Firstcricket News, Firstpost

India’s recovery in the Birmingham Commonwealth Games women’s cricket event was much a relief as it was a revelry. Having lost their opening match against Australia from a position where it would have been easier to win, India needed to win this one.

Also, irrespective of what the situation is, it is never playing Pakistan, simply because of all the hype around the match from all corners. But Smriti Mandhana ensured that there were no such butterflies after the Indian bowlers were thankfully much more on the money, though that department is where the coaches will be looking if India are to continue their good work.

Mandhana was absolutely on fire, something that is a little to visualise, thanks to her languid style. But even as Pakistan tried to set a trap on the off-side, her stronger suit, the left-hander found her way through the on-side and straight initially, and then scored at will to script a facile win in 11.4 overs.

The win gave India the points they needed, not to mention a very healthy run-rate, which may not quite be an issue in the group in the long run, given that one doesn’t really visualise India losing to Barbados. But it never hurts to have decent stats.

What India did well was not to get bogged down, which did Pakistan in. The latter too had their moments in the match, especially when opener Muneeba Ali and stand-in skipper Bismah Maroof were batting, but their inability to cash in on that advantage made a telling difference.

All the other batters on display – Shafali Verma, S. Meghana and Jemimah Rodrigues played bit roles, though Verma did her moments. However, from a truly professional viewpoint, India could have won this one by 10 wickets, and the loss of the two wickets was not really warranted.

It was a good idea to send Rodrigues up the order, though not much was left in the match by the time the second wicket fell. Nevertheless, it is essential that Rodrigues sees action up the order and that may be something that the coaching staff and skipper Harmanpreet Kaur consider before the Barbados match.

India’s bowling still has a few questions, which would read as incongruous, given the fact that they dismissed Pakistan in 18 overs. The question was about them being unable to control their line against the left-handers.

The issue was when the two left-handers were batting. Muneeba and Maroof found a lot of easy stuff on their leg-stumps, which was largely instrumental in their 50-run stand for the 2nd wicket.

Renuka Singh Thakur was not quite as penetrative as she was against Australia, and though Meghna Singh did come up with perfect outswinger to get rid of Iram Javed, the subsequent bowling efforts from all concerned were not where they should have been.

It isn’t easy to change line when there is a left-right combination, but the bowlers were struggling even against a left-left combo.

All of this could well read as nit-picking in what has been a pretty good win, but one needs to address the big picture.
It is unrealistic that India will lose to Barbados in their last league match, but the way things are going, they will likely end up second in the group, below Australia.

That being the case, India will likely come across New Zealand in the semi-finals, which will certainly be a far cry from their experiences in the league. For that reason alone, the bowlers need to know where the off-stump is for all batters, right or left-handed.

The fielding was quite up to the mark, as was evident from the three run-outs in the Pakistan inning, and that too is something that India will have to keep up. There have been quite a few instances when the Indian fielding has flagged, as was the case in the ICC World Cup.

But all in all, there can’t be too many complaints when the side wins by such a big margin, that too in a truncated game.

Shorter games always tend to be a little dodgier, but that assault by Mandhana was all that India needed. The left-hander is in a different class, so for India’s sake we hope that she can keep her form till the end of the teams outing in the Commonwealth Games.

Denial of responsibility! NewsUpdate is an automatic aggregator around the global media. All the content are available free on Internet. We have just arranged it in one platform for educational purpose only. In each content, the hyperlink to the primary source is specified. All trademarks belong to their rightful owners, all materials to their authors. If you are the owner of the content and do not want us to publish your materials on our website, please contact us by email – [email protected]. The content will be deleted within 24 hours.
best sports newsbigCWGFirstcricketFirstpostIndiaNewsnews update sports

10 transfers to watch out for in Premier League

Jamie Carragher claims only one new Tottenham signing will…