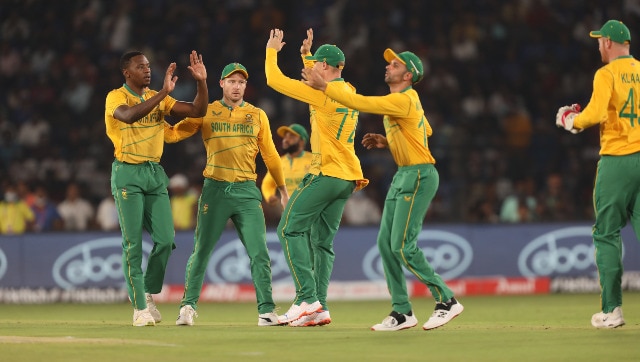 South Africa needed 51 in seven overs. At the crease stood Heinrich Klaasen, whom Indian bowlers remember from Centurion four years ago; and David Miller, who has done little wrong in this reasonably long Indian summer, first for Gujarat Titans, and now for his national side.

While there is little doubt over Klaasen’s abilities to destroy attacks – he strikes at over 145 in the format – he has played only 28 T20Is before the Cuttack match. Miller was formidable, but he was new to the crease. Wayne Parnell, Kagiso Rabada, Keshav Maharaj – the men to follow – were bowlers who could hit.

South Africa were favourites, but a wicket would have brought India back into the match. On the other hand, if they failed to take a wicket soon, South Africa could take the match deep, for they needed to score only a shade over seven runs an over.

Bhuvneshwar Kumar, whose spell of 3-0-10-3 had set South Africa back in the Powerplay overs, was the most obvious choice. Yuzvendra Chahal had bowled the last over, but India also had Harshal Patel and Avesh Khan.

Instead, they went for the defensive. Axar Patel had conceded 19 in his only over, and was unlikely to be used again. Since Hardik Pandya had bowled two overs, he had to bowl a third to make up that four-over quota. Rishabh Pant summoned him. South Africa got 10 without taking risks.

Avesh went for seven, and once again Pant had the choice of recalling Bhuvneshwar or Harshal. Instead, he recalled Chahal. During that Centurion match, Klaasen had taken 41 from 12 balls bowled by Chahal, including five sixes and a four. At Cuttack, Klaasen faced took 15 off four balls, including two sixes. With Miller also hitting a six, the match was as good as over.

Harshal and Bhuvneshwar returned, but it was too late by then. Almost to make a mockery of the sequence of bowlers, they conceded a total of nine runs, and took a wicket apiece. They might have done worse had they bowled instead of Hardik in the 14th over or Chahal in the 16th. By delaying them, India played into South Africa’s hands.

Earlier in the night, India had a mini-collapse in the middle overs, and were suddenly four down in the 13th over. They promoted Axar ahead of Dinesh Karthik, presumably with the idea to ensure their last dangerous end-overs batter was there in the end. Karthik had to come out in the next over, and remained unbeaten on a 21-ball 30 in the end to help India reach 148/6.

In the recently concluded IPL, Karthik finished with a strike rate of 183 – the most among Indians. He achieved this despite getting out only six times in 16 innings, once every 30 balls. Not only was he scoring quickly, but he was also not getting out.

One can understand the way India approached this match. They had perhaps planned out stages of the innings where Harshal and Bhuvneshwar would bowl; and probably a designated time when Karthik would bat. They did not alter that irrespective of what happened in the match.

Contrast this with South Africa. They were already without Aiden Markram. Forced to leave out Quinton de Kock, they had to bring in Klaasen to keep wickets. But de Kock’s absence meant that they also needed an opener, so they brought in Reeza Hendricks for Tristan Stubbs.

There was obvious temptation in replacing Dwaine Pretorius and going in with a bowler fewer. However, they backed Pretorius’s batting – you seldom get bowled out in T20s, after all – and played the extra bowler. The five-bowlers-one-all-rounder model had worked for both Gujarat Titans and Rajasthan Royals this season; South Africa replicated them twice in this T20I series.

Pretorius does not have a long career. Before this series, he had batted at No 3 only once in his career before, in his maiden T20I innings, when he slammed a 42-ball 77 not out against Sri Lanka at Johannesburg. He had not batted in the top five since then. His T20I strike rate is 165, but that goes up to 183 in his three innings at No 3. If these seem small samples, his corresponding numbers in all T20s are 138 and 150.

South Africa’s Heinrich Klaasen raises his bat in celebration after completing his half-century in the second T20I against India in Cuttack. Sportzpics

Miller strikes at 155 in T20Is since 2021, and Markram at 149. Along with de Kock, they form a formidable line-up. In Pretorius and Klaasen, they have now found two more, while Stubbs’s strike rate in the death overs — a ridiculous 220 — is the second-best in T20 history.

Despite this dangerous batting line-up, however, their strength lies in bowling – something that came to the forefront yet again at Cuttack. They restricted India to 148: only twice in their history have South Africa failed to chase a target below 149 in a T20I, and they happened back in 2009 and 2010.

Rabada bowled just short of a good length, cramping both Ishan Kishan and Ruturaj Gaikwad. Then he bowled a bouncer that took off awkwardly, and flew high enough to be ruled a wide, then pitched the next ball slightly up. Gaikwad, perhaps anticipating another bouncer, was late on to the shot and sliced to point.

Rabada bowled his next over, to Kishan and Shreyas Iyer, at roughly the same length. Sensing the two-paced nature of the wicket, Temba Bavuma immediately replaced Parnell with the quicker Anrich Nortje. Kishan responded with two sixes, both of which he picked up from a length outside off and hit through leg. Despite Rabada’s 2-0-4-1, India got 42/1 in the Powerplay; they seemed to have gained upper hand.

But immediately the Powerplay got over, Nortje returned from the end where Rabada had found bounce. And with no field restrictions, Bavuma had a man at deep square leg. It worked like clockwork: Nortje bounced, Kishan hooked, and the ball went to the fielder.

India reached 68/2 after nine overs when Keshav Maharaj came to bowl. On strike was Pant, known for his penchant of taking on spinner, particularly the ones who bring the ball into him. And while he is fierce off his back foot, Pant’s usual method is to step out and hit either straight or towards the leg.

Maharaj’s best bet was to bowl as far outside off as possible. That way, if Pant had to step out and slog, he would have to drag it from a distant line. Maharaj did exactly that. Pant had already left the crease, and the ball was so far away that all he could do was hit towards off as hard as possible without reaching its line. He could not clear deep point.

Pandya was in outstanding form in IPL 2022, but he had not faced Tabraiz Shamsi. Nor were there many left-arm wrist spinners in this edition. Pandya survived a leg-before appeal first ball, but Pandya well to hit a four.

Parnell returned from round the wicket – once again, not an angle Pandya had faced much this season. He hit the first ball he faced to cover, but Bavuma could not hold on. Then Parnell angled one into him. Pandya tried to cut, but the ball came too close to him for that, and he was bowled.

After 13 overs, India were 92/4. The match was as good as over. They lost two more wickets, of Axar and Iyer, and could add only another 56 in the last seven overs despite Karthik’s onslaught.

Abhishek Mukherjee is the Chief Editor at CricketNews and co-author of Sachin and Azhar at Cape Town.

Denial of responsibility! NewsUpdate is an automatic aggregator around the global media. All the content are available free on Internet. We have just arranged it in one platform for educational purpose only. In each content, the hyperlink to the primary source is specified. All trademarks belong to their rightful owners, all materials to their authors. If you are the owner of the content and do not want us to publish your materials on our website, please contact us by email – [email protected]. The content will be deleted within 24 hours.
Africabattlebest sports newsblueFirstcricketFirstpostIndiamen