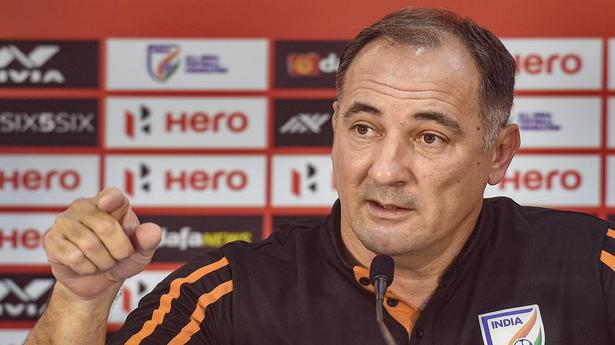 Indian football team head coach Igor Stimac has lashed out at the messy state of affairs grappling the national federation (AIFF), a day after his side qualified for AFC Asian Cup for the second consecutive time.

The AIFF is currently run by the Supreme Court-appointed Committee of Administrators (CoA) after the Praful Patel-led federation was found to have violated the National Sports Code.

While an immediate suspension by FIFA because of third-party intervention is out of cards, Stimac questioned the timing of the issue, which has cast a shadow on India’s qualification for a prestigious tournament like the AFC Asian Cup.

“For such an important tournament, was this the time to do this? Was anybody thinking how that could affect the dressing room and the players?” Stimac asked, referring to AIFF’s current state of affairs.

“I am not getting into who is right and who is wrong. It is not my job. I am just talking about timing. At such an important time, such a thing is happening, is anyone normal?”

“Nothing would have happened if they were waiting for three more weeks after having waited so many years,” he said.

The 54-year-old, whose contract has been extended till September, also minced no words when asked about his future.

“We had no time to talk about contracts. We don’t even have a board. Nobody thought about how that drama could affect the players,” the Croatian said.

India’s qualification was sealed ahead of their final league match against Hong Kong on Tuesday when Palestine registered a 4-0 win against Philippines in a Group B game in Mongolia.

Stimac’s side celebrated its qualification with an emphatic 4-0 win over Hong Kong later in the day as it finished with three wins to top group D, their best ever campaign.

Came to India for ‘less salary’

Stimac further pointed out that he came to India for a “less salary” when he had multiple offers in hand.

“The players are trying to save my job. I came here for less salary than what was my market price. I had offers from others for better-paid jobs than I saw in India. The coach was never the problem in this country, you should talk about other problems,” he said.

“We look into the future where we want to be. We want to be in every Asian Cup and we also want to compete strongly for the World Cup Qualifiers, which was clearly said at the beginning of my term,” Stimac said.

“Be it AIFF or the government. Beware of the Indian national team. We represent India, if there are ambitions in the country to think where we can be, they must follow our motto,” he said.

India began their campaign with a 2-0 win over Cambodia and then secured a last-gasp 2-1 victory over Afghanistan. The icing on the cake came when they swept aside table leaders Hong Kong 4-0 to qualify as group toppers.

Stimac further laid out his conditions to stay here, saying he would like to make the I-League a breeding ground for Indian football.

“In the Indian Super League there is already the 3+1 rule. But we need to reduce foreigners altogether from the I-League going forward if we want to go forward,” he said.

“Some things will need to change drastically. In the future, if I am here, the league will need to stop when I say, for as many days as I think is needed for the national team to prepare to go higher,” he said.

“And players who are chosen by us, they will have to play at the clubs… We are eight to 10 years late in our development programme… eight to 10 years behind the top eight Asian countries. How are we going to get there? So let’s wake up,” he said.

Denial of responsibility! NewsUpdate is an automatic aggregator around the global media. All the content are available free on Internet. We have just arranged it in one platform for educational purpose only. In each content, the hyperlink to the primary source is specified. All trademarks belong to their rightful owners, all materials to their authors. If you are the owner of the content and do not want us to publish your materials on our website, please contact us by email – [email protected]. The content will be deleted within 24 hours.
AIFFAsianbest sports newsCoachcrisisCupFootballIndian