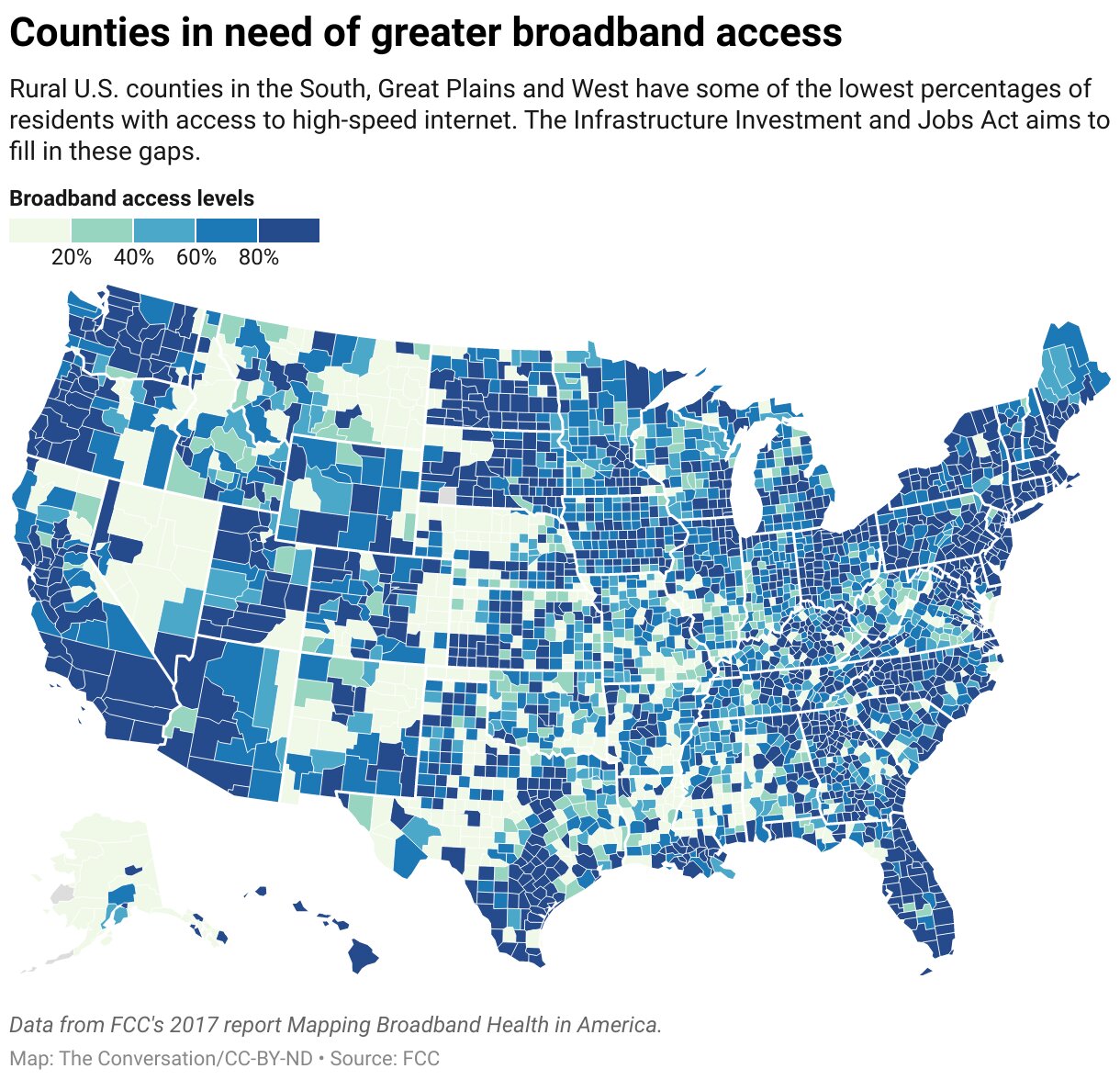 Infrastructure law: High-speed internet is as essential as water and electricity

The Infrastructure Investment and Jobs Act signed into law by President Joe Biden on Nov. 15, 2021, was hailed by the White House and advocates as a historic investment to improve internet access in America.

As a researcher who studies internet policy and digital inequality, I believe the infrastructure plan should be celebrated as a historic moment for broadband, but not so much because of the money it brings to the table. Rather, it is because of the way the law treats internet access in America.

In the law, Congress finally recognizes that “access to affordable, reliable, high-speed broadband is essential to full participation in modern life in the United States.” In other words, broadband access is like access to running water or electricity. It is essential infrastructure, the lack of which is a barrier to economic competitiveness and the “equitable distribution of essential public services, including health care and education.”

If decades of academic studies did not persuade Congress to enshrine this vision in law, the images of teachers in school parking lots and students outside fast-food restaurants connecting to remote classes during the COVID-19 pandemic probably did.

The law goes further by acknowledging that the “digital divide disproportionately affects communities of color, lower-income areas, and rural areas,” and orders the Federal Communications Commission to take action against discrimination of access based on income level, race, ethnicity, color, religion or national origin. This is an important recognition of the role that broadband access plays in perpetuating cycles of poverty and community underdevelopment.

Many studies, including my own, have documented how investments in fiber-optic lines and related next-generation broadband infrastructure are going to more affluent communities, often bypassing low-income residents in highly urbanized areas such as Los Angeles and Detroit. The law not only empowers the FCC to monitor and correct such practices, but also helps align private investment incentives with public benefits by creating the Affordable Connectivity Fund, a permanent broadband subsidy for low-income households.

Broadband investment by the numbers

The act provides $65 billion in new funding for expanding broadband infrastructure and promoting adoption. The largest of the law’s many components is the $42.5 billion Broadband Equity, Access, and Deployment program, which goes to the states to administer as block grants to expand broadband networks. The second-largest piece is the $14.2 billion Affordable Connectivity Fund, which subsidizes eligible households with $30 per month for internet access.

This is a lot of needed funding, but broadband has a high bar when it comes to historic investments. The FCC’s E-rate program, created in 1996 to help connect schools and libraries, has an annual budget of $4.2 billion. The Connect America Fund, created in 2011 to subsidize the cost of broadband deployment in high-cost areas, has a budget of $5 billion. Lifeline, created in 1996 to help low-income consumers pay for phone and internet, has a budget of $2.5 billion. Add up these investments over the years, and a one-time $65 billion investment seems less historic than the headlines suggest.

Getting people connected involves more than making broadband available and more affordable. It also involves digital literacy training and raising awareness about connectivity opportunities. In a recent study in California, my colleagues and I found that only 1 in 5 low-income residents were aware of the Emergency Broadband Benefit, a federal subsidy program launched in early 2021 to address pandemic-related disruptions to internet access.

The new law acknowledges this challenge and creates two programs—the State Digital Equity Capacity Grant Program and the Digital Equity Competitive Grant Program—that seek to build state capacity and promote broadband adoption through local community organizations. This marks a significant departure from the “build it and they will come” approach that has guided federal broadband policymaking for decades.

Earlier drafts of the bill containing language that prioritized these entities for grant allocation were fiercely opposed by industry, which aimed to blunt competition from nonprofits and the public sector. In the end, the compromise language allows states to fund public and nonprofit networks but does not preempt state laws that bar municipal governments from running ISPs of their own. Despite the toned-down support for public and nonprofit broadband, the law signals a shift in favor of alternative models of network deployment and broadband provision.

Many of the law’s key provisions are left to be implemented at the state level. This raises legitimate questions given that several states have a poor track record of prioritizing equity in the allocation of federal funds in related areas such as transportation.

An example is the law’s mandate that recipients of network deployment grants must offer at least one low-cost service option for eligible subscribers. The law leaves the definition of low-cost and the eligibility guidelines up to states, though in consultation with the National Telecommunications and Information Administration. If history provides any guidance, industry incumbents are well positioned to bend rules in their favor at the state level.

At the very least, I believe the FCC’s current affordability benchmark of 2% of disposable household income going toward phone and internet services should serve as the starting point for these discussions. My colleagues and I showed that current expenditure on residential broadband alone for most low-income households far exceeds this benchmark.

Not surprisingly, as many as 1 in 4 low-income households in our survey reported having cut essential expenses such as health care, food or clothing to pay for broadband since the start of the pandemic. Lack of affordability disproportionately affects minority households, with Black residents, Native Americans and those who identify as Hispanic twice as likely to report having to cut essential expenses to pay for internet access.

A departure from business as usual

Congress has long recognized the value of public investments in transportation, electricity and other essential infrastructure systems. These systems provide benefits for individuals, for businesses and for communities that go well beyond their price tag. They are considered essential because they connect people to jobs, to health care and to educational opportunities.

For too long, broadband was largely left out of this select list. By correcting course, the new law is an important step toward affordable internet for all.

$1B in grants to go for broadband on tribal lands

Denial of responsibility! NewsUpdate is an automatic aggregator around the global media. All the content are available free on Internet. We have just arranged it in one platform for educational purpose only. In each content, the hyperlink to the primary source is specified. All trademarks belong to their rightful owners, all materials to their authors. If you are the owner of the content and do not want us to publish your materials on our website, please contact us by email – [email protected]. The content will be deleted within 24 hours.
best technology newselectricityEssentialhighspeedinfrastructureinternetLawnews update tech