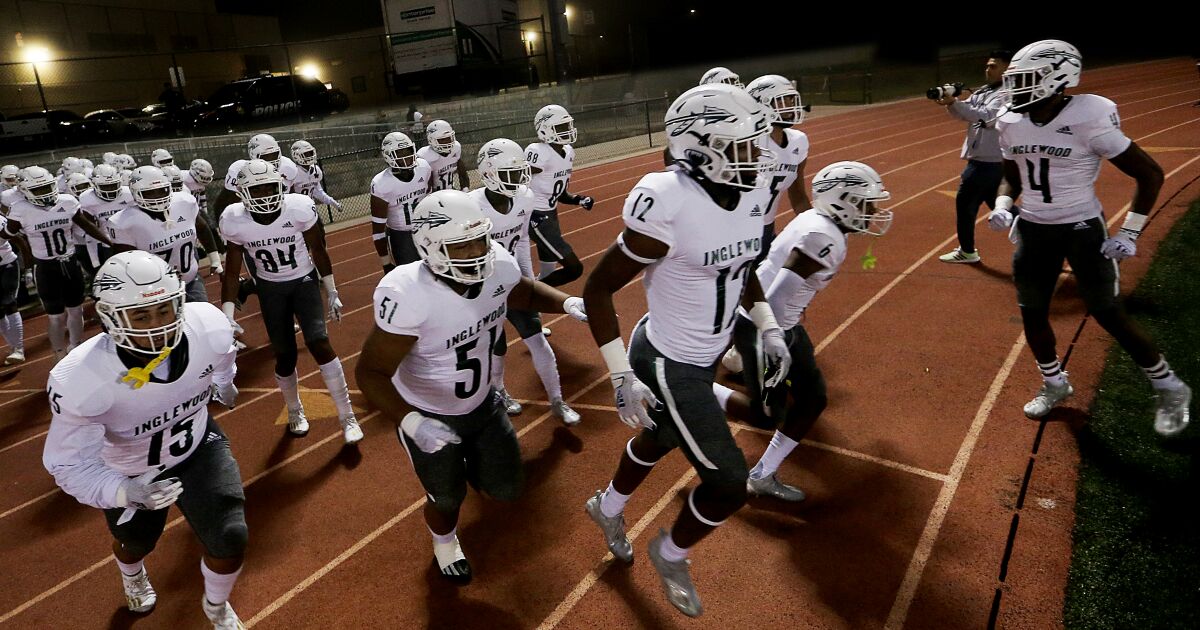 Jamari Johnson stood smirking in the 50-degree chill, steam swirling off his 6-foot-5 frame, drops of sweat glistening on his cheeks like tiny frozen icicles.

Inglewood’s Friday night Division 2 semifinal against West Hills Chaminade went so late that even the smallest breath turned to fog in the dead-of-night cold at South Torrance High, the Sentinels and Eagles trading back-and-forth blows in an instant playoff overtime classic. And with the ball on the two-yard line and a chance to walk it off, it was Johnson, Inglewood’s senior All-American and Louisville commit, who bullied his way into the end zone as his teammates and sidelines erupted with a 41-38 win.

“Before the play started,” Johnson said after a four-touchdown game, “I already knew I was going to get in there.”

Inglewood maintains a perfect record heading into a Division 2 final against Chatsworth Sierra Canyon, who beat Bishop Amat 29-23 to continue an undefeated surge after a 2-4 start.

Early, it seemed as if whichever team could get a single defensive stop would emerge the winner, the Sentinels and Eagles trading scores on five straight drives starting toward the end of the first quarter.

Chaminade quarterback Javance Johnson made play-action magic, running for two first-half scores and throwing for another — despite a catch that was clearly fumbled — as Inglewood sophomore signal-caller Husan Longstreet wheeled and dealed in his own right.

After Longstreet found receiver Terrell Bradshaw for Bradshaw’s second touchdown grab of the night, Inglewood took the lead 28-27 in the third quarter — and in the nick of time, the Sentinels defense kicked in, shutting down Chaminade for the majority of the second half as Inglewood tacked on another score to extend their lead to 35-27.

But this game couldn’t end that fast. With 2:30 to play, Chaminade marched down the field thanks to Inglewood penalties that sent the Sentinels crowd into a frenzy of boos. Seeming to slow time on a third and 10, Javance Johnson tucked the ball and pranced into the end zone, a casual score in the most dramatic of moments as Logan Carpenter followed with a two-point conversion.

And he did, prancing and dancing for four touchdowns. But it wasn’t enough. The magic ran out in overtime, Chaminade settling for a field goal as the Inglewood defense forced a fourth down, eliminated as Jamari Johnson found paydirt.

Denial of responsibility! NewsUpdate is an automatic aggregator around the global media. All the content are available free on Internet. We have just arranged it in one platform for educational purpose only. In each content, the hyperlink to the primary source is specified. All trademarks belong to their rightful owners, all materials to their authors. If you are the owner of the content and do not want us to publish your materials on our website, please contact us by email – [email protected]. The content will be deleted within 24 hours.
best sports newsChaminadeDivisionInglewoodnews update sportsnewsupdateoutlastsovertime