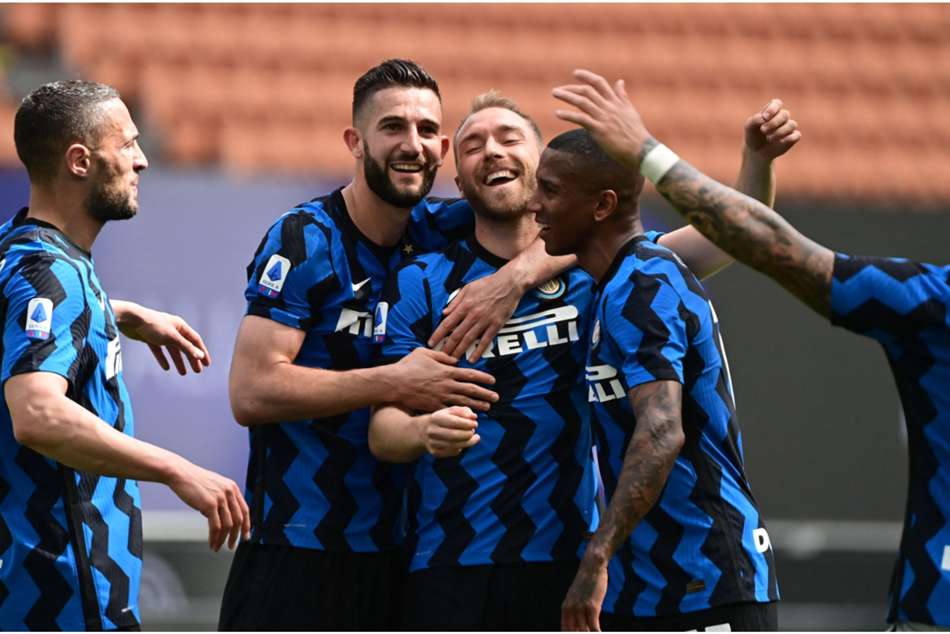 Inter 5-1 Udinese: Five-star Serie A champions sign off in style

Lautaro Martinez converted a penalty 10 minutes after the restart and Ivan Perisic added a majestic finish in front of the 1,000 spectators invited by the club to witness their crowning moment.

Substitute Romelu Lukaku scored a fortuitous 30th goal of the season in all competitions before Roberto Pereyra converted a consolation penalty, but that did little to stop Inter celebrating as they finally got their hands on the trophy in front of a gathering of fans outside the stadium.

Inter’s coronation got off to a great start with Young latching onto Martinez’s deflected shot and dinking a fine finish over Juan Musso after eight minutes.

Eriksen replaced Stefano Sensi, who went off with an injury that could impact his hopes of representing Italy at Euro 2020, and found the back of the net with a powerful free-kick that took a touch off Stefano Okaka.

Inter moved further ahead in the 55th minute when Marvin Zeegelaar tripped Achraf Hakimi inside the box and Martinez drilled the resulting penalty into the bottom-left corner.

A swift break ended with Perisic curling Matias Vecino’s pass across goal and into the top-right corner, before a cross from Alexis Sanchez hit the post and rebounded in off the chest of an unaware Lukaku.

Inter were unable to keep a clean sheet as Nahuel Molina’s cross was headed onto Eriksen’s hand by Alessandro Bastoni and Pereyra beat Daniele Padelli, who replaced Samir Handanovic at half-time for what is set to be his final appearance for the club, from the spot in the 79th minute.

What does it mean? No damp squib for Inter

Conte made seven changes from the side that suffered a 3-2 defeat to Juventus last time out and the game had the feeling of a pre-season friendly with neither side really having anything to play for.

However, Young’s early goal got Inter started and they cruised to a final-day victory without ever really getting out of second gear.

He may have gone off at half-time, but Handanovic still moved past Walter Zenga and made a record-breaking 329th Serie A appearance for Inter. He did not have a single save to make during his time on the pitch, however.

Inter’s meeting with Udinese was their 3,000th in Serie A, making them the first club to reach that landmark. Their record now stands at 1,496 wins, 834 draws and 670 losses.

Inter can bask in their glory with a gathering of fans outside San Siro but will be expected to successfully defend their title in 2021-22. Udinese, however, will likely simply be hoping to retain their top-flight status for another year, and the future of star man Rodrigo de Paul may once again be in doubt.

Denial of responsibility! NewsUpdate is an automatic aggregator around the global media. All the content are available free on Internet. We have just arranged it in one platform for educational purpose only. In each content, the hyperlink to the primary source is specified. All trademarks belong to their rightful owners, all materials to their authors. If you are the owner of the content and do not want us to publish your materials on our website, please contact us by email – [email protected]. The content will be deleted within 24 hours.
best sports newschampionsFivestarInternews update sportsnewsupdateSeriesign

What All the Most Promising Features of Google’s Android 12?