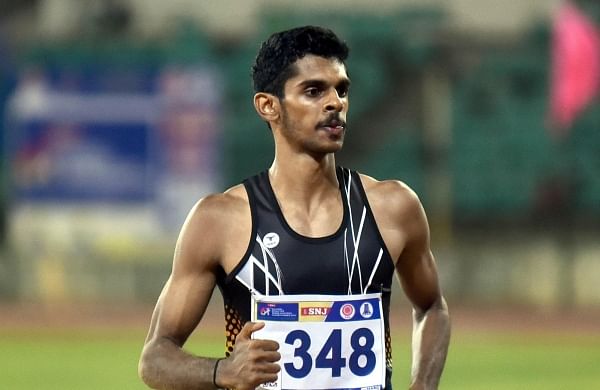 CHENNAI:  M Sreeshankar has his hands up in anticipation. He’s at the top of the runway, beginning his fifth jump on a humid Saturday evening in Chennai. Whenever he feels confident of a good jump, he raises his hands. Seconds later, he’s travelling through the air. It’s a textbook landing. One of the officials screams ‘8.23 metres’. The small but very appreciative crowd that’s gathered near the long jump pit go wild. They have got what they came to see; the 23-year-old jumping beyond the 8.20m territory.

It’s something the athlete from Kerala has been doing on a consistent basis. In 2022 alone, he has registered three jumps over the territory. Three of the best 11 jumps in 2022 are his (8.36m, 8.31m, 8.23m). Considering the Worlds begins in just over a month, that’s a good place to be in.

Ninety minutes later, the long jumper is jogging up and down a small corridor in the bowels of the stadium. It’s a familiar problem that athletes face. He is waiting to give his urine sample at doping control but, sometimes, it’s not that easy. After the high of competition, it may take time for the body. “I usually drink four bottles of water (500ml), I’m down to my fourth. This routine of jogging also helps. Nothing so far today (Saturday),” he laughs. “Once in Patiala (the meet that saw him qualify for Tokyo), I waited for four hours.”

As he waited to complete the process, he gave an impromptu wide-ranging interview including but not limited to his love for memes, watching movies on Netflix, his relationship with father, inputs from Mitliadis Tentoglou (Olympic champion), what he thinks of mathematics (he’s a graduate in BSc in it) and his bonding with the other members of India’s 8m club, Jeswin Aldrin and Muhammed Anees. Excerpts…

“I usually drink four bottles of water (500ml), I’m down to my fourth. This routine of jogging also helps. Nothing so far today (Saturday). Once in Patiala (the meet that saw him qualify for Tokyo), my event finished at 5 and I reached the hotel at 11 (laughs).

Your thoughts on the event today (Saturday)?

What do you mean by loaded?

When I’m peaking, I reduce intensity and volume, and focus more on hypertrophy. More reps less weight, Mainly focus on power-based training. My body weight reduces. Since I am loaded right now, my body weight is up. After one month, it will be a competition weight. I will always be in the 67-69 range, now I am more towards 69. Will come back to 67 closer to Eugene. In Patiala, I was at 66kg. I was very light then. Close to Tokyo was I 64-65 – lost a lot of muscle mass after Covid. Was very bad.

Does a lighter weight translate to better jump?

How does the ratio work?

Squatting 200/ bodyweight 60 = power used. We have sophisticated equipment now, but we do it manually. Chinese, Brazilians all use it. IISc (Indian Institute of Science) has the equipment.

There are three of you guys jumping over 8m in events…

It was more like a mental barrier, 8m. It’s not there anymore. Everyone’s pushing each other. We don’t see each other as competitors. We see each other as friends. When I’m jumping, Anees chetta (elder brother) is there to support me. When I’m jumping, he supports me. When Jeswin jumps, we support him. Because of this mutual connection, we are able to raise the standard. Take the case of the triple jumpers. They stay together, eat together, train together… more like brothers only. They do everything together. That’s the connection they have. When I was watching their training sessions, I was so hyped up. It was more like the Calicut federation cup (laughs). (India, for the first time ever, will be eligible to send three triple-jumpers to the Worlds).

How do all of you guys bond? Do you watch South Indian movies with the team?

(Laughs) latest craze is KGF II. Anees and his team watch all the movies. But my dad (his coach) won’t allow me (laughs). I really follow memes a lot. Most of the pages I follow on Insta are meme pages. I’m very updated with the memes. Last time I went for a movie was in 2016. After that, I had 12th boards. Training, preparation… He’s (father) not interested in movies. Netflix and all I watch. But one movie I take 2-3 days. I don’t have permission to stay beyond 12.00. I have to sleep at this time, eat at this time… whenever I put on my headset, he says ‘you are always putting this’. But for a big goal, we have to sacrifice so it’s okay. Anyway these days, all movies come on OTTs within a month.

I listen to songs but he won’t allow me to play songs during training. No video games, but I do play sudoku. I follow the NBA a lot. He follows NBA, F1… when I told him to watch that Jordan documentary (Last Dance), he was like I know all this.

Where are you in regards to taking help from a foreign coach?

I’m always open to suggestions from foreign coaches. Right now, after joining the national camp, we are taking inputs from the newly appointed jumps coach (Denis Kapustin). He’s an Olympic medallist. I have not fully shifted to his programme but my father always takes his inputs. When he drafts a programme, he always asks the coach, ‘Is this okay? Is that okay?’ If he says it’s not good, we remove it. We do it in a coordinated way.

8.35m. I think we have a great Cuban (Juan Miguel Echevarria) guy. He hasn’t started jumping, I don’t know why. I think there’s some internal problem in Cuba, I don’t know. There is one decathlon guy (Simon Ehammer) He’s the major threat. He suddenly jumped 8.45m out of nowhere. He’s the world leader this year. I was watching Tentaglou’s interview in Rabat. He’s like ‘I have to defend the long jumper’s pride. This guy is insane, he has jumped 8.45’.

Do you speak with Tentoglou?

We contact via Instagram. He’s a very nice guy. He said ‘whatever help you need, ask me’. His coach is also a very good person. His coach was helping us with all the training and everything when we were in Athens for a week or so. He’s just a very gifted guy. Raw talent. He’s a guy who can jump 9m. In Belgrade (Indoor Worlds earlier this year) also he had a 8.70 jump. During events, he gave some inputs. Technical, speed wise and so on.

What are your learnings from the Olympics? Also your thoughts on mental conditioning?

During the Olympics, I wasn’t physically fit. Now, everything is smooth. This time it will be good, I’m sure. Obviously mental conditioning is key.

Now, I don’t feel that it’s (Thobias) Montler or it’s Tentoglou I’m competing against. (I know) I can beat them. In today’s competition also, I was lagging behind. But the experience of competing with these guys (outside India) helped me. I know I can connect one jump. That’s the experience. Earlier, there would be situations when I used to panic a lot. I would get very anxious, technically also it would be bad. But now I know I will get it. Now, even if I don’t get it in the fifth jump, I know I will get it in the sixth jump.

Do you now believe you are at that level?

Not with Tentoglou. Echevarria and he’s at a different level. But I’m slowly getting into that league. It’s a process, it will take time. Same happened with Tentoglou. 2017 (Outdoor) and 2018 (Indoor) Worlds he couldn’t qualify. In 2019 (Outdoor) he qualified for the final. In 2021 he won the Olympics. Suddenly you go to the Worlds and win… it’s possible but not so realistic. There’s always a process.

Have you finished your MSc (he’s doing his first year Masters in Statistics)?

I had exams last week. I have lost track of my academics (laughs). Now my academics are completely zero. Maths is completely…. where are we going to do maths, things like trigonometry? We had a project called ‘Math in our daily life’. Where is Math in our daily life (laughs). We solved two full pages of integration problems for two marks and I told my friends ‘where the hell are we going to use this’? Only use is to get good marks and get admission. Math is like… if we are being realistic, it’s useless apart from basic calculation. But when you go to advanced levels, rocket science and disciplines like that, then yes. Sin, cos, tan… physics, aerodynamics, when you club it with advanced physics, yes.

Denial of responsibility! NewsUpdate is an automatic aggregator around the global media. All the content are available free on Internet. We have just arranged it in one platform for educational purpose only. In each content, the hyperlink to the primary source is specified. All trademarks belong to their rightful owners, all materials to their authors. If you are the owner of the content and do not want us to publish your materials on our website, please contact us by email – [email protected]. The content will be deleted within 24 hours.
best sports newsINTERVIEWjumplongmemesnews update sportsnewsupdateopens

Call Of Duty: Warzone’s New Map For Season 4 Gets A Name

It’s Supernatural vs. Once You Go Black