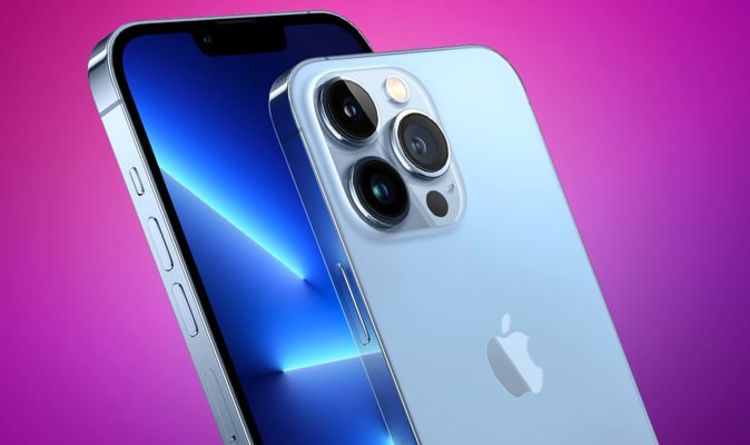 iPhone 13 Pro and 13 Pro Max arrives in four new finishes – Graphite, Silver, Gold, and Sierra Blue. For the latter, Apple says it had to create an entirely new manufacturing process to create the light blue colour beneath the all-glass design. On the front, iPhone 13 Pro follows the more affordable iPhone 13 with a smaller Face ID facial recognition system. That means the notch at the top of the display has shrunk.

Although there’s no different in screen sizes compared to the iPhone 12 Pro and 12 Pro Max, you will get a little extra screen on these new models as the front-facing camera, speaker grill and Face ID won’t be intruding as much into your view.

Powering the iPhone 13 Pro and 13 Pro Max is the new A15 Bionic chip, which has been custom-designed inside Apple to increase power and battery efficiency.

A new OLED display is a little brighter – topping out at 1,000 nits which should make checking your smartphone in bright sunlight easier. And that’s not the only trick up the new screen’s proverbial sleeve. Apple has added ProMotion to its iPhone 13 Pro and 13 Pro Max screen. This technology, which made its debut in iPad Pro a few years ago, allows the screen to adapt its frame-rate from 10Hz up to 120Hz.

At 120Hz, the screen refreshes twice as often as the iPhone 12 Pro, which makes system animations appear smoother. Everyday tasks, like scrolling, should appear slicker, while fast-paced gaming will be more frantic than ever before. This is something we’ve seen from the biggest Android manufacturers and has become standard on smartphones at the same price point as the iPhone 13 Pro. However, unlike most of the Android handsets we’ve seen, Apple isn’t simply touting the improvements of 120Hz. More than simply hitting that blink-and-you’ll-miss-it 120Hz refresh rate, the slower 10Hz refresh rate will enable Apple to eke out more battery life, since the screen isn’t refreshing as frequently when it doesn’t have to (when you’re reading the page of an eBook, for example).

iPhone 13 Pro and 13 Pro Max introduces some exciting new changes to its camera system. HDR 4.0 should enable you to capture more detail in extreme lights – like when shooting into the sun, for example. Apple is also allowing users to pick their own style, which will be synced across the various modes in the Camera app, including Portrait Mode and Time-lapse. Once you’ve made your adjustments, these will be persevered ready for the next time you launch the Camera app.

For example, if you prefer warmer tones in your images, you can tell your iPhone to prioritise these attributes when shooting via Photographic Styles. That should ensure users aren’t constantly jumping into the Edit features to make the same adjustments to their photos every single time.

Cinematic Mode allows iPhone owners to draw focus – a Hollywood technique that shifts the blur to reveal new details or prioritise one character over another. It can also be used to keep the background blurred until a character walks into frame and in-focus. Until now, all iPhone models would use its autofocus to pick another part of the frame to keep in-focus – never allowing users to keep that blur as an artistic choice. Once you’ve finished shooting in Cinematic Mode, you’ll be able to adjust the amount of blur – or change the subject in-focus – in the Edit mode too.

A software update will bring the ability to shoot and edit in 4K ProRes video at some point later this year, Apple says.

iPhone 13 Pro starts at the same price as last year, with the entry-level model starting with £999. iPhone 13 Pro Max starts at £1,099. There is also a new model with 1TB of onboard storage, which is a must for anyone planning to use the new 4K video capabilities to shoot their debut feature film.

Denial of responsibility! NewsUpdate is an automatic aggregator around the global media. All the content are available free on Internet. We have just arranged it in one platform for educational purpose only. In each content, the hyperlink to the primary source is specified. All trademarks belong to their rightful owners, all materials to their authors. If you are the owner of the content and do not want us to publish your materials on our website, please contact us by email – [email protected]. The content will be deleted within 24 hours.
Loading...
Loading...
120Hzbatterybest technology newsbluecolouriPhonelifenews update tech