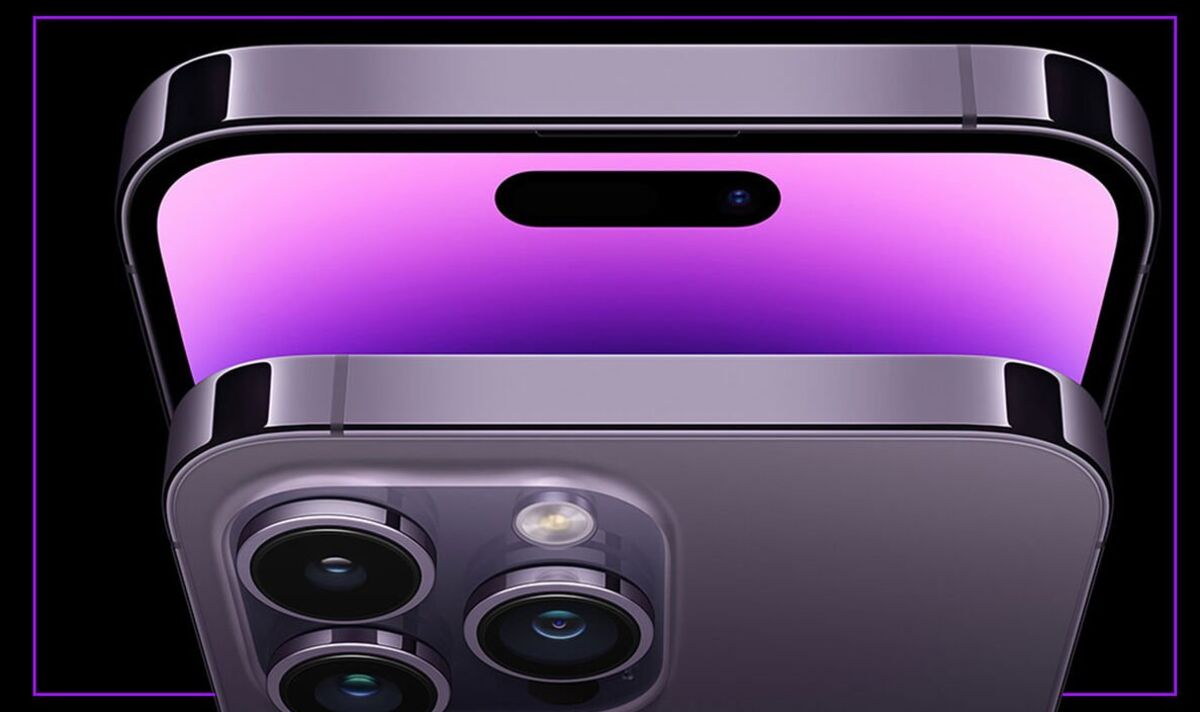 iPhone 14 Pro and Pro Max review: Everything we want in a smartphone

It really feels like the Pro is the way to go this year. These more premium Apple devices have been treated to the biggest upgrades including a fabulous always-on screen, new interactive camera notch – called the Dynamic Island – that magically changes as use the phone and a more powerful A16 processor which takes performance and efficiency to a whole new level.

The camera has also been boosted with a bigger sensor making sure every image looks crystal clear and packed with detail.

The Pro models also continue to be the only devices in Apple’s lineup that offer the speedy ProMotion 120Hz screen and huge 1TB of internal storage.

This is another blockbuster update to the Pro range and, for the first time in years, it’s now easier than ever to recommend spending the extra cash as the standard iPhone 14 lacks all of these blockbuster updates.

Yes, the iPhone 14 Pro and iPhone Pro Max are ludicrously expensive but, having had all of Apple’s latest devices in our hands, going Pro is definitely worth every penny.

The iPhone 14 Pro range has had a monumental refresh this year with these devices getting a swathe of exclusive features that you won’t find on any other Apple smartphone including an always-on screen, ludicrous amounts of power and a clever notch that’s now fully interactive.

The rear camera has had a boost with it now featuring a bigger sensor. So, should you invest in a Pro model despite the price rising to well over £1,000?

There are some mighty changes on iPhone 14 Pro and Pro Max and some of our favourite upgrades are found on the superb ProMotion displays. These screens are not only brighter than before but also get all-new features including something Apple calls the Dynamic Island.

It might be a slightly bizarre name but there’s nothing strange about how it works. This small black panel, which replaces the notch for the front-facing camera and Face ID technology, is now fully interactive with it switching its appearance as you use the device.

For example, when a call comes through the bar instantly expands so you can see who is ringing you. There’s even the option to answer it right from this pop-up panel. Plug the phone in and it will show it’s charging and how much power is in the tank. Set a timer, start a playlist or start using your AirPods and the Dynamic Island switches each time to show snippets of information. It also makes multitasking more intuitive with a quick tap on this bar launching specific controls for apps such as Apple Music. It’s a really neat idea and it’s sure to improve over time as Apple makes tweaks and more developers get onboard.

The next upgrade is something we’ve been wanting for a while with Apple finally bringing an always-on display to its iPhone.

Android users have enjoyed glowing screens for years and it’s great to see the iPhone taking the plunge.

Of course, Apple has its own take on this technology and it’s certainly impressive. Unlike most Android devices, which simply show a clock and date, the iPhone’s screen dims so you’ll still see your favourite wallpaper and all notifications that pop up on the home screen. It’s a brilliant addition and having been well behind Android when it comes to always-on technology, Apple has now jumped miles ahead.

The US firm has also used a clever 1Hz refresh rate and multiple power-efficient technologies to make sure this feature doesn’t hurt battery life and, during our tests, we’ve not seen any huge losses when it comes to overall power.

So that’s the new screen but what about the design?

Other than some striking new colours – including an eye-catching Purple – and a slightly bigger camera bump things look almost identical to last year’s Pro models.

We still really like the industrial design of the iPhone with the sharp edges looking polished and premium. Like its predecessors, the Pro and Pro Max are both covered in Ceramic Shield glass which protects against smashes.

If you want a device that’s easy to handle we’d recommend the smaller 6.1-inch Pro model. There’s no doubt that the 6.7-inch Pro Max offers a mighty experience but it is pretty big and heavy so might not suit those with small fingers or tiny pockets.

The Apple A16 Bionic is now the fastest processor they have created (Image: APPLE)

Apple’s A15 Bionic processor was already market-leading but things are now even more impressive thanks to the launch of the A16 brains.

This is the firm’s first chip built on a 4-nanometer process which basically allows the phone to be more efficient while boosting the power.

The A16 is what has allowed Apple to introduce that always-on screen and other features such as the Dynamic Island without it drastically affecting battery life.

High-intensity tasks such as gaming also feel even smoother on the new Pro models.

If Android was behind before these devices launched, they have even more catching up to do if they want to take on the might of Apple.

When it comes to battery life, things really impress. We’ve been using all of the new features on the iPhone 14 Pro and Pro Max and are easily able to get through an entire day without seeing the indicator glowing red. Even with the always-on screen enabled we got over 16 hours of usage and went to bed with over 30 percent remaining.

These are, of course, Pro devices so they get a very impressive camera upgrade with users treated to a triple-lens snapper that, for the first time ever, features a new 48MP Main camera with a quad-pixel sensor that adapts to the photo being captured. This means that every image taken on the phone looks like it’s been shot by a pro.

There’s also a quad-pixel sensor which enables a 2x Telephoto option for full-resolution photos and 4K videos with no digital zoom. This delivers optical quality at a familiar focal length, which is great for features like Portrait mode.

Anyone who loves a selfie will also be pleased to hear that Apple has fitted a new 12-megapixel TrueDepth camera, which boasts autofocus (a first for the front-facing camera in any iPhone) and the Deep Fusion image processing system for the first time. Photos of your face will never look so good!

If it’s video that’s more important to you then there’s now something called Action Mode, which smoothes out your video footage as you jog or sprint …like using an accessory like a gimbal or an action-focused camera, like GoPro.

We’re still fully testing the cameras but here are some test images shot on the Pro Max.

As well as all of the obvious new additions to the iPhone 14 Pro there are also some useful extras you’ll hope you never need.

Tucked under the shell is satellite technology which lets you send texts even when there’s no mobile signal. This could really help those in far-flung places keep in touch. It’s only available in the United States and Canada this year but with any luck, more countries worldwide will be added to the list soon.

The iPhone 14 Pro and Pro Max also get Crash Detection. This function alerts the emergency services after an accident and even sends an exact GPS location so you can be found quickly.

Apple has explained that this function works via sensors in the phone that can feel forces felt during a smash with the device instantly kicking in and sending directions to your location.

Thankfully we’ve not tried Crash Detection and hope we never need to but it could genuinely save your life.

Crash Detection calls the emergency services if you have a crash (Image: EXPRESS NEWSPAPERS)

Of course, the iPhone 14 Pro range also gets fast wired charging and support for MagSafe, which lets you magnetically snap wireless chargers, car mounts, and cases to the back of the handset. This was introduced with the iPhone 12 devices and remains in the iPhone 14 lineup, so any existing accessories should work just fine.

They also come with iOS 16 preinstalled with this latest operating system bringing new features such as a refreshed Lock Screen, editable messages and improved health functionality.

Going Pro in 2022 is definitely not going to be cheap. For the first time ever, you can’t buy one of these devices without having well over £1,000 in your bank account with things now starting from a really hefty £1,099.

That’s for the standard 128GB version – start pushing things up to a Max model with 1TB of storage and you won’t be left with any change from £1,749. Ouch!

Apple is offering ways to reduce that cost with owners of previous iPhones able to trade them in for money off these new gadgets.

The hike is definitely an unwelcome one but it’s the price you’re going to have to pay if you want the best iPhone Apple has ever made.

Other than the ludicrously high price there’s really nothing to loathe about the iPhone 14 Pro and Pro Max. In fact, these are now without a doubt the best smartphones Apple has ever made.

We love the always-on screen and the Dynamic Island is such a clever idea that we expect Android devices to start featuring it as soon as they can work out how to copy it. The A16 Bionic is an absolute beast and makes using the Pro range an absolute joy.

The camera is now even better and every shot you take looks stunning without any fuss. Apple has also managed to cram all of these extras into the phones without impacting the battery life.

Yes, the Pro Max will still be a little big for some to cope with and the increase in costs this year is a little hard to take.

However, if you want the best iPhone on the planet you’re really not going to get anything better than the new iPhone 14 Pro.

Denial of responsibility! NewsUpdate is an automatic aggregator around the global media. All the content are available free on Internet. We have just arranged it in one platform for educational purpose only. In each content, the hyperlink to the primary source is specified. All trademarks belong to their rightful owners, all materials to their authors. If you are the owner of the content and do not want us to publish your materials on our website, please contact us by email – [email protected]. The content will be deleted within 24 hours.
best technology newsiPhoneMaxnews update technewsupdateProreviewSmartphone

How to integrate Jira into Trello