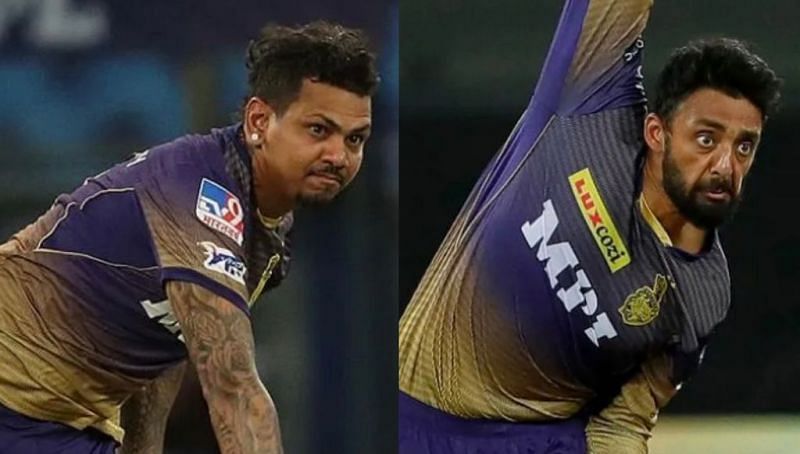 IPL 2021: “KKR’s strength has been their mystery spinners” – Sunil Gavaskar

Despite missing the services of Pat Cummins, Lockie Ferguson and all-rounder Andre Russell in some of their crunch games, KKR find themselves well-placed for playoff qualification.

“Kolkata’s strength has been the eight overs of mystery spin they can unleash. While Narine bowls an immaculate line and length and doesn’t give any freebies to the batters, Chakravarthy is more tantalizing in the way he brings forth the wrong prod from the batters as they are unsure which way the ball is going to turn.

“What the duo has shown is that you don’t need to turn the ball a mile, but just a few inches to defeat the middle of the bat and catch the edge,” wrote Sunil Gavaskar in his column for the Times of India.

However, the cricket legend warned the KKR captain Eoin Morgan not to rely on the combination of Venkatesh Iyer and Nitish Rana as their fifth bowler – a move that backfired in their loss against Punjab Kings (PBKS) last week.

Sunil Gavaskar stated that despite defending champions Mumbai Indians’ (MI) routing of Rajasthan Royals (RR) on Tuesday, they face an uphill task to qualify for the playoffs if KKR manage to beat RR on Thursday. KKR have a far superior net run-rate (NRR).

“Out of the two matches on the penultimate day of the league stage, the match between Kolkata and Rajasthan will be the one that will garner the eyeballs.

“If Kolkata win, they will go through, as it will mean that Mumbai will have to win by margins which are hardly seen in the ultra-short format of the game, and so will out on qualifying. Yes, Mumbai were brilliant against Rajasthan when they restricted them to only 90 and got the runs in a jiffy to improve their net run rate (NRR), but their NRR is still way inferior to Kolkata’s and so all that Kolkata need to do, is just beat Rajasthan,” Sunil Gasvaskar wrote.

KKR and MI are placed in fourth and fifth spot respectively in the IPL 2021 points table with 12 points from 13 matches. KKR’s NRR reads 0.294, while MI is at -0.048. This means MI’s qualification depends on a KKR loss against RR, followed by their win against bottom-placed Sunrisers Hyderabad (SRH) on Friday.

Good news for #KKR – Andre Russell and Lockie Ferguson has started the practice ahead of the do or die match in IPL 2021.

Good news for #KKR – Andre Russell and Lockie Ferguson has started the practice ahead of the do or die match in IPL 2021.

Denial of responsibility! NewsUpdate is an automatic aggregator around the global media. All the content are available free on Internet. We have just arranged it in one platform for educational purpose only. In each content, the hyperlink to the primary source is specified. All trademarks belong to their rightful owners, all materials to their authors. If you are the owner of the content and do not want us to publish your materials on our website, please contact us by email – [email protected]. The content will be deleted within 24 hours.
best sports newsCricketGavaskarIPLIPL 2021ipl 2021 newsKKR VS RRKKRs

Lot of uncertainties around it: MS Dhoni on playing for CSK next season | Cricket News – Times of India

Rams vs. Seahawks matchups: Matthew Stafford looks to bounce back